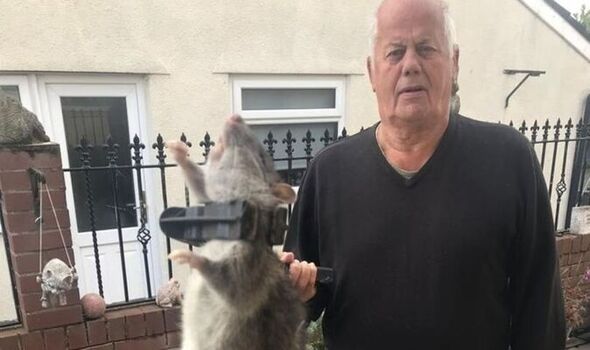 A retired pub boss has caught an enormous rat in his back garden during an ongoing battle with vermin that often invade from open land nearby.

Mr Blamire, a great-grandfather, described the rat: “From nose to tail, it was about 18 inches long. It was the length of a small baby.”

He posed for a picture with the dead vermin, asking his wife, Sylvia, to take a snap of his defeated adversary, which he grasped with a litter picker.  Sylvia, 80, added: “It scared me to death.”

Some of the rats have become wise to Mr Blamire’s baited traps, so he has been forced to adapt his tactics accordingly by leaving his bird feeders empty on occasion to make the rodents hungrier.

The Daily Star reported Mr Blamire as saying: “I feed the birds, you see, and if you feed the birds, it’s obvious rats are going to turn up – there’s probably more rats than people.

According to the RSPCA, rats live in large colonies in the wild. Rat colonies have complex social structures and, without company, rats (either domestic or wild) can end up lonely and depressed.

While the spread of the Great Plague of 1665 is often attributed to the species, it is now thought that it was more likely to have been spread by human lice and fleas.

Plenty of large cities have had rat problems, with the COVID-19 lockdowns of 2020 said to have exacerbated the situation in London, with some rats in the UK even being reported to be becoming resistant to chemical poisons.

In New York City, Mayor Eric Adams and Sanitation Commissioner Jessica Tisch recently declared war on the city’s vermin by introducing measures like reducing the time rubbish is sat on the city streets between collections.

Rats rely on their sense of smell to find food and avoid dangerous encounters with predators. This means that several species of plants with a particularly pungent smell are known for their ability to ward away pests from gardens.

For example, Mint produces an aroma similar to menthol, which rats don’t like. Both Lavender and Garlic can also act as a deterrent, with their strong scents also repelling pests such as rats.

Claiming to have caught around 50 rats over the last few years, Derek Blamire is undeterred in his efforts, stating: “If they keep coming, I’ll keep catching them. I’m not going to give up.”