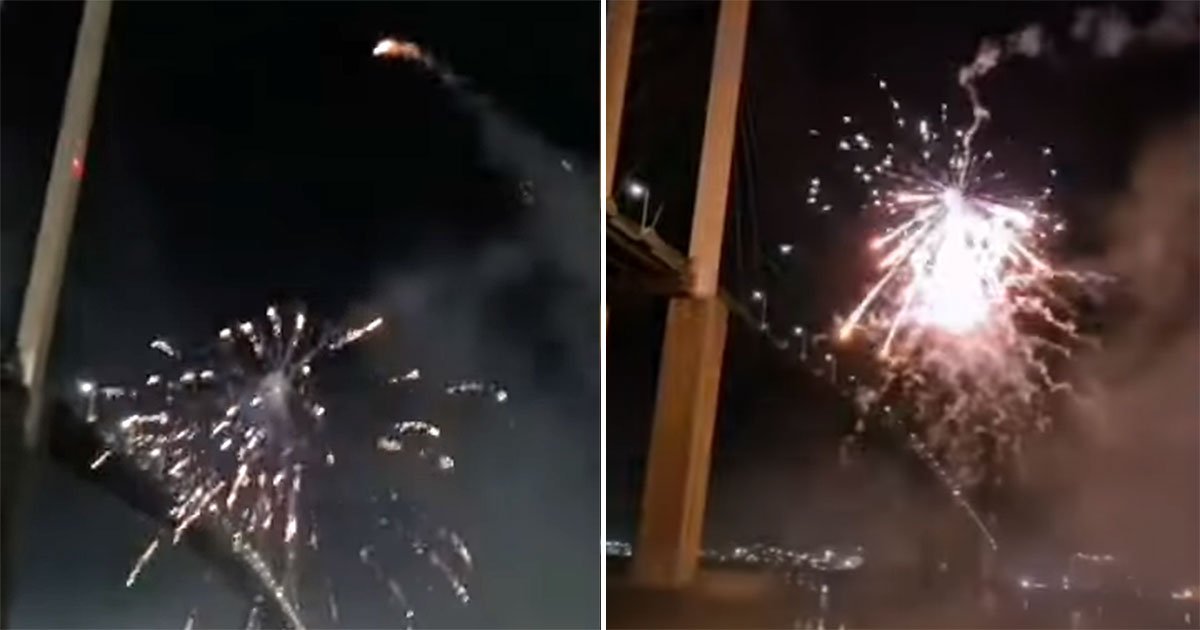 Fireworks appear to have been launched in the direction of Just Stop Oil protesters in a bid to get them off the Dartford Crossing.

Two activists scaled the Queen Elizabeth II bridge during the early hours of Monday morning and have so far been undeterred by attempts to get them to come down.

The bridge has now been closed for more than 24 hours, angering thousands of commuters who need to use the vital route each day.

A nine-second clip circulating across social media last night shows sparks lighting up the sky as people laugh in the background.

Someone can be seen standing below the bridge where the two fireworks were launched in quick succession, but it appears to have done little to get the activists to move.

Because of the disruption caused by the protesters, traffic heading from Essex to Kent was forced to divert using one of the two Dartford tunnels which normally brings M25 traffic in the opposite direction.

On Monday, queues on the A2 heading to the M25 stretched back for more than three-and-a half miles.

Just Stop Oil demonstrators have not been put off by the angry backlash from the public, and have pledged they will continue to cause disruption.

A spokesperson for the protest group said: ‘Ordinary people are right to be upset, frustrated, irritated, angry – their lives have been disrupted.

‘Politics is failing us, it has failed on the cost of living crisis with families cold and hungry and its failing on the climate crisis, with transport and crops being hit in this country.

‘Our government can reopen the M25, reopen Dartford Bridge and end this disruption immediately by making a statement to end new oil and gas.’

Essex Police said on Monday night: ‘Our officers are continuing to work with partners, including National Highways and Thurrock Council, to safely resolve the situation on the Dartford Crossing where two people are at height.

‘The QEII Bridge remains closed while we work alongside our partners.

‘During the busy Monday evening rush hour period a contraflow stayed in place through the tunnel to ensure traffic could move from one side of the river to the other.

‘We expect the bridge to remain closed this evening and into tomorrow morning’s rush hour. We would advise motorists to avoid the area and plan an alternative route if they possibly can.’

Chief superintendent Simon Anslow, from Essex Police, added: ‘We understand how frustrating this situation is for people wanting to use the bridge and go about their business. Let me assure you we are doing all we can to resolve this situation quickly and safely.

‘It is a complex situation due to the height the people on the bridge are at.

‘Our colleagues at National Highways, who have responsibility for the bridge, have made an assessment that it is not currently safe to re-open the road.’