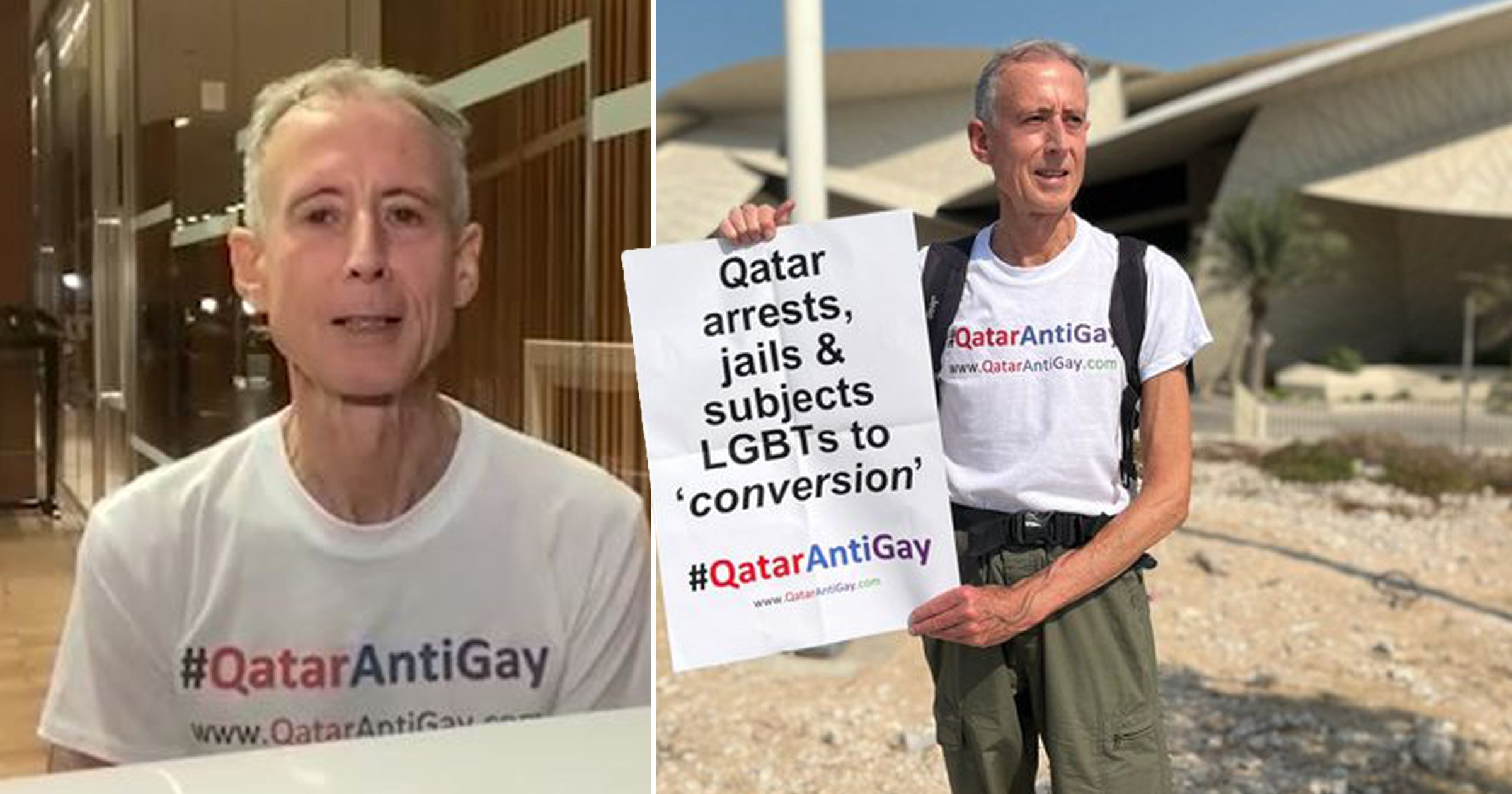 Peter Tatchell has said he was subjected to a ‘pretty heavy interrogation’ by the Qatari authorities and told to leave the country after protesting in support of LGBTQ+ rights.

The human rights activist, who was with a colleague, described how he was detained at the kerbside in the capital Doha and ‘bombarded’ with questions by police and state security personnel.

He told Metro.co.uk that the FIFA World Cup had led to the officers being lenient on a Westerner – and this would not have been the case had a Qatari made the same display of protest.

Speaking from Doha’s Hamad International Airport as he prepared to fly to Australia, Mr Tatchell told how he had been stopped from staging the protest outside the National Museum of Qatar this afternoon.

The Qatari authorities have denied reports that he was arrested and said he was ‘cordially and professionally’ asked to move from a roundabout, while suggesting ‘organisations’ are using the World Cup to increase their profiles.

‘Amazingly I was able to stand there with a placard,’ Mr Tatchell said.

‘It said Qatar arrests, jails and subjects LGBTs to “conversion” and I was wearing my #QatarAntiGay T-shirt. I was there for 35 minutes before state security arrived and they were followed soon afterwards by police. 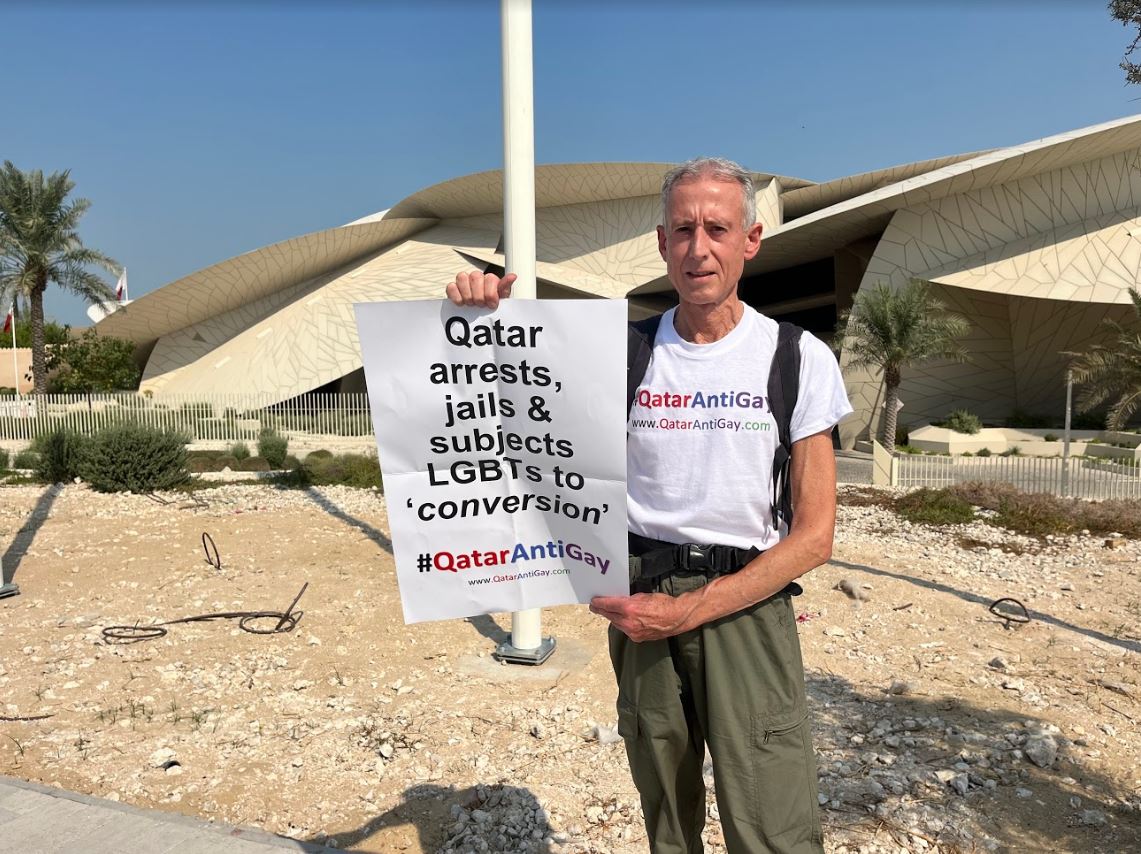 ‘I wasn’t physically restrained but I was subjected to a pretty heavy interrogation about where I had come from, where I was staying and did I have any contacts in Qatar etc…

Mr Tatchell described how his colleague at the Peter Tatchell Foundation, Simon Harris, was made to hand over his phone to officers who deleted pictures and videos, some of which he had already sent to London.

The protest is said by the foundation to be the first ever to take place publicly in support of LGBTQ+ rights in Qatar or any Gulf state.

‘The detention lasted for about 49 minutes, after which the police said I should leave the country and go to the airport,’ Mr Tatchell said.

‘There was no direct threat but it was very clear that it was my best interests to leave the country and go to the airport tonight.

‘They suggested that normally such a protest would attract a very severe penalty and that was made pretty clear.

‘We know that Qataris who do this kind of protest end up in prison.

‘Indeed, while I was standing there, a Qatari woman walked by and said “you’re going to end up in jail”…Of course I was very nervous because I didn’t know how they would react…

‘Fortunately, I think the fact the World Cup is upcoming led the police and security services to take a more benign response.’

Mr Tatchell, 70, has previously spoken to Metro.co.uk about human rights concerns in Qatar ahead of the World Cup, which kicks off at the 60,000-capacity Al-Bayt stadium in 26 days.

Same-sex relations are illegal in the oil-rich Gulf state and can be punished with prison sentences under its penal code.

The rights of women and the workers who built the World Cup stadiums and facilities were also behind the Londoner’s reason for protesting.

The reported poor living conditions and restrictive working practices among labourers have been highlighted by Amnesty, although improvements are said to have been made over the past decade.

‘The message is that Qatar abuses the rights of its own citizens.’ Mr Tatchell said. ‘FIFA should have never given Qatar the World Cup, given its diabolical human rights record. I am told that LGBTQ+ Qataris are afraid to speak out or identify themselves, because they are afraid of the consequences.

‘They are particularly worried that once the World Cup is over and the international media has moved on, there will be intensified repression, not just of LGBTQ+ Qataris but also women’s rights campaigners and those who are working for a better deal for migrant workers.

‘For me, this was about LGBTQ+ human rights, but also about the rights of women and migrant workers as well.’

Mr Tatchell and Mr Harris flew into Qatar from London at 7am today and are due to fly on to Sydney tonight.

‘I am the messenger and not the message,’ Mr Tatchell said in a Zoom call.

‘We have to remember the people here in Qatar. I have got the protection of a British passport, they don’t, they live under an oppressive regime, in a police state, where human rights are not respected.’

Early signals by the hosts suggested fans would be able to raise rainbow flags and express LGBTQ+ identities, at least inside the eight stadiums.

But the overtures were followed by a crackdown on children’s toys with colour schemes similar to the Pride symbol and comments by a senior Qatari official that security staff could intervene to stop expressions of support in order to protect spectators’ safety.

Qatar’s Government Communications Office said: ‘Rumours on social media that a representative from the Peter Tatchell Foundation has been arrested in Qatar are completely false and without merit.

‘An individual standing in a traffic roundabout was cordially and professionally asked to move to the sidewalk, no arrests were made.

‘We are extremely disappointed to see baseless accusations being freely reported by media outlets, without facts.

‘Many organisations will use increased media attention on Qatar ahead of the FIFA World Cup Qatar 2022 to promote their own profiles.

‘We are always open to dialogue with entities that wish to discuss important topics, but spreading false information with the deliberate intention of provoking negative responses is irresponsible and unacceptable.’

Police are said to have left the scene after shaking hands with the campaigner, who remained on the sidewalk, according to Reuters.

The news agency said that two uniformed police officers and three plainclothes officials had folded up his placard and taken photographs of the two British men’s passports and other papers.

Human rights groups have credited Qatar with improving conditions for the construction workers since it was awarded this year’s World Cup, which is expected to attract 1.2 million visitors.

Speaking to Sky News earlier this month, Nasser Al Khater, chief executive of Qatar 2022, said: ‘People don’t understand the amount of work that’s gone in over the past 10 years in terms of really, really overhauling the workers’ rights and workers’ laws in this country.’

The tiny country’s ruling emir has also hit back at what he described as an ‘unprecendented campaign’ against its host year.

In a televised speech, Sheikh Tamim bin Hamad al-Thani said: ‘The campaign tends to continue and expand to include fabrications and double standards that were so ferocious that it has unfortunately prompted many people to question the real reasons and motives.’