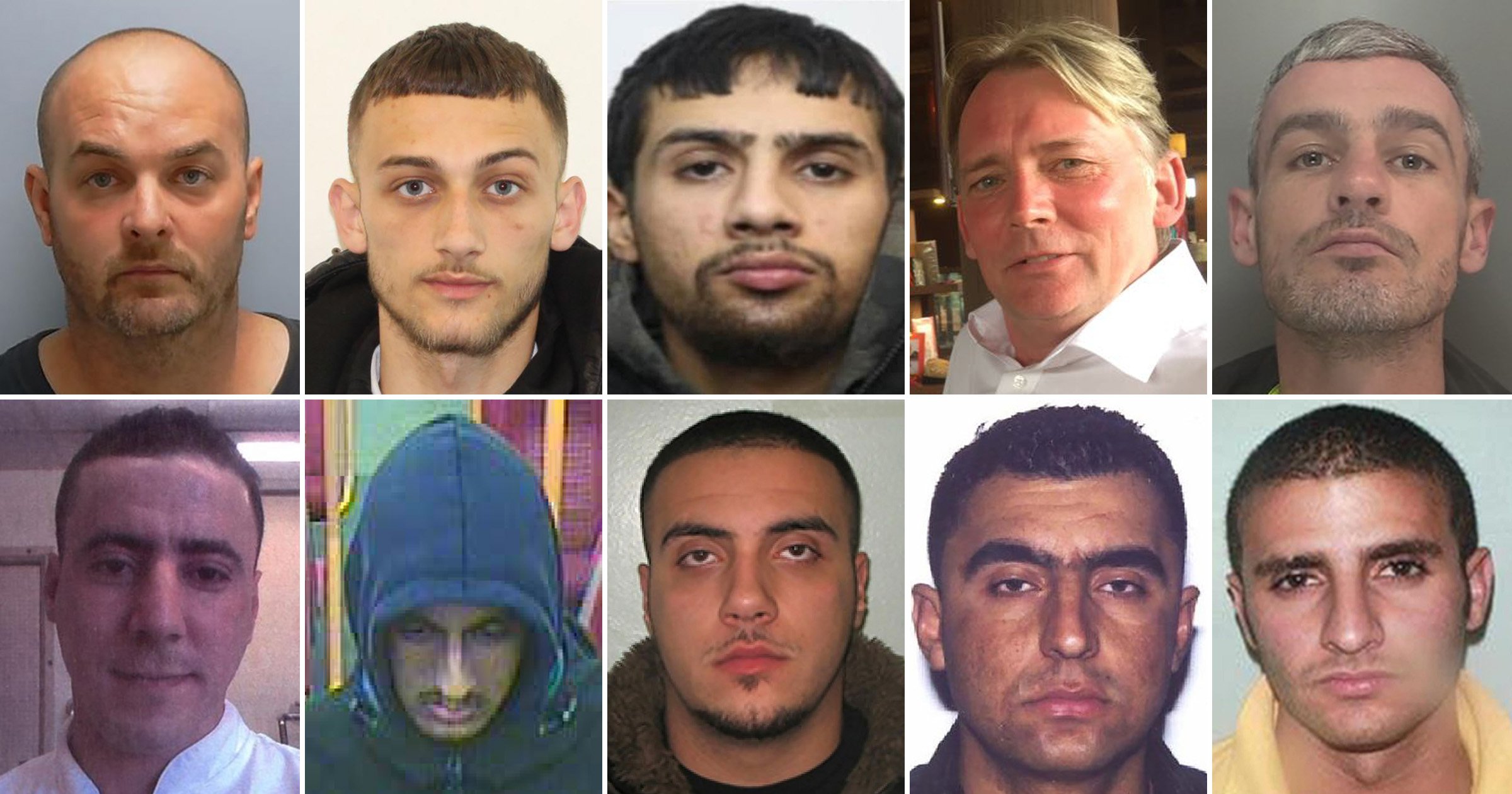 They are wanted in connection with serious crimes against women and girls ranging from murder to a high value romance fraud.

The 10 men on this list have been identified as a result of police investigations into the offences carried out across England.

Heightened awareness of the need to protect the legal rights of women and girls has followed a series of cases including the murder of Sarah Everard by Wayne Couzens, who was a Metropolitan Police officer at the time.

Couzens, 49, is serving a whole-life tariff for the murder.

Another was the killing of aspiring lawyer Zara Aleena by Jordan McSweeney, who attacked her while she was walking home.

At court two weeks ago, McSweeney, 29, was sentenced to a minimum of 38 years in prison for the murder.

Despite campaigns to tackle various types of serious crime targeted at women and girls, it remains an ever-present reality.

One in five women will experience sexual assault during her lifetime, and one in four domestic abuse, according to Home Office statistics.

Here are 10 men who are wanted by police forces nationally.

Davis is wanted in connection with assaults on two women in Basingstoke.

The 39-year-old is being sought by detectives in connection with the offences on September 9 this year.

Officers are continuing with a number of enquiries to trace him.

Davis is said by Hampshire Police to have links to Southampton and Basingstoke.

The public are asked not to approach him but to call 999.

Davis is described as white, 6ft tall, of medium build and with a shaven head and green eyes.

Police have warned that it is an offence to harbour someone wanted in relation to a crime as they seek Domi in connection with a rape.

The 20-year-old is being sought in relation to the incident in Luton on Sunday, October 23. Officers have advised members of the public who may have information about Domi, who is from the town, to avoid him and to contact officers on 999 instead.

In an appeal, Bedfordshire Police said: ‘Members of the public are also reminded that it is an offence to harbour someone who is wanted in relation to a criminal investigation.’

A man wearing a Parka-style jacket is wanted in connection with the reported rape of a teenage girl three years ago.

Mudasser Ahmed, 26, is being sought by detectives who have carried out extensive enquiries into the offence against the 15-year-old.

They are now appealing for the public’s help to trace him in connection with the reported offence in Barnsley in October 2019.

South Yorkshire Police want to hear from anyone who has seen or spoken to Ahmed recently or knows where he might be staying.

He has links to Birmingham and London, including the SW19 area.

John Eric Wells is wanted in connection with three high value romance frauds which deprived the victims of £400,000 in total.

The 61-year-old, who is originally from South Yorkshire, allegedly carried out the offences from September 2014 onwards.

The victims lived across the UK, including in Doncaster, Sussex and London.

South Yorkshire Police would like to hear from anyone who has seen or spoken to Wells recently or has information which might help officers with their enquiries.

The force believes it is possible Wells is living outside the UK.

Police officers in Merseyside have appealed for help in locating a man they would like to speak to in connection with allegations of domestic violence.

Christopher Gorman, 37, from Huyton, may be able to help with enquiries following the reports received by the force.

He is described as 5ft 6in, of medium build and with short greying hair and brown eyes. He has a ‘Rest in Peace Dad’ tattoo on his right leg.

Gorman poses with his chin up in a picture on the ‘wanted’ section of the Merseyside Police website. Anyone who recognises him or has information about his whereabouts is asked to contact the force.

Benlaredj is wanted over the rape of a seven-year-old girl 15 years ago.

He appears on a wanted list drawn up by the National Crime Agency (NCA), which gives little information about him.

Benlaredj is said to use the nickname Samir and to have committed rape and child sexual abuse on May 1, 2007 before fleeing to Spain.

A hooded man is being sought by officers at British Transport Police who would like to speak with him about a sexual assault on a train.

The CCTV still has been released following the incident between Windsor Eton Riverside in Berkshire and Staines in Surrey.

A man approached the victim as she waited for a train at Eton Riverside station at around 9.20pm on September 21.

They both boarded the train and the man sat opposite her on a table seat.

He continuously stared at the woman before getting up and walking to another carriage.

He then returned to where she was sat and started peering under the table at her legs and up her skirt. As they approached Staines, the victim heard a coin drop on the floor. The man bent down to pick it up and sexually assaulted her before leaving the train.

Officers believe the man in the CCTV image may have information which could help their investigation.

A Cypriot man is wanted over the rape of a girl in London more than a decade ago.

Costas Sampson was convicted of the offence in August 2012 but has evaded justice and appears on the NCA’s most wanted list.

He is said in the appeal to have met the victim at a club in London in February 2010.

She was taken unwell after accepting a drink from a stranger and Sampson and a friend offered to take her and her friend home.

He told the victim’s friend that he was a medical expert in order to win her trust, and she went to another room to sleep.

Sampson, who uses the alias Kostas, is then said to have raped the girl at her flat while she was incapacitated. He was also convicted of stealing her mobile phone and her flatmate’s laptop and games console.

Sampson is described as between 175 and 180cm tall, of large build and with black, cropped hair.

A man convicted of posing as a private hire taxi driver before raping his victim remains at large, 16 years on from the crime.

Rezgar Zengana is said to have collected the 25-year-old woman in Argyle Street, Glasgow, before driving her to a private dwelling where the offence took place on December 10, 2006.

Zengana was convicted at the High Court in Glasgow but he did not appear for sentencing and he also appears on the NCA’s most wanted list. He is believed to be in the Netherlands or Turkey.

Zengana is described as between 180 and 185cm tall, with black hair and of Middle Eastern appearance.

Abdulhak is wanted over the murder of a Norwegian student 13 years ago.

The billionaire’s son is being sought by the UK authorities over the death of Martine Vik Magnussen.

The 23-year-old business student’s body was found semi-naked and surrounded by rubble in the basement of a property where Abdulhak was living in Westminster, London. She had been raped and strangled after leaving a Mayfair club with him in the early hours of March 14, 2008.

Within hours, the playboy fled to Egypt and then on to Yemen, where he is believed to be living an isolated existence.

Metro.co.uk has previously told how Martine’s family and the Metropolitan Police continue to seek Abdulhak’s appearance before the British courts.