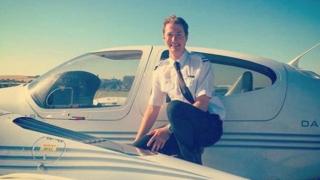 An Isle of Man pilot who was among four people to die in a plane crash in Dubai was “a beautiful soul who touched many hearts,” his family have said.

William Blackburn, from Douglas, was on a DA42 light aircraft that came down three miles south of Dubai International Airport on Thursday.

The 26-year-old’s family said flying was his passion and his death was “a tragedy we must learn to live with”.

Two other Britons and a South African were aboard the UK-registered plane.

The four-seat propeller-driven plane was owned by Flight Calibration Services, which flies staff around the world to inspect and calibrate navigation aids, which include radars and landing systems for airports.

Mr Blackburn worked as a first officer for the firm, which is based at Shoreham Airport in West Sussex.

US engineering and aerospace company Honeywell said it had hired the firm’s plane for work in Dubai.

Mr Blackburn’s family said: “He was a lovely caring person that we were blessed with, and people who didn’t know him wished they did.

“He was amazing and will be truly be missed by us all.”

The General Civil Aviation Authority said an investigation was under way.

A spokesman for Flight Calibration Services said: “We are shocked and saddened beyond words by the loss of three colleagues and a Honeywell employee in Dubai.

“Our thoughts and prayers are with their families. We are working closely with the accident investigation authorities and as yet there is no news as to how this tragic accident happened.”