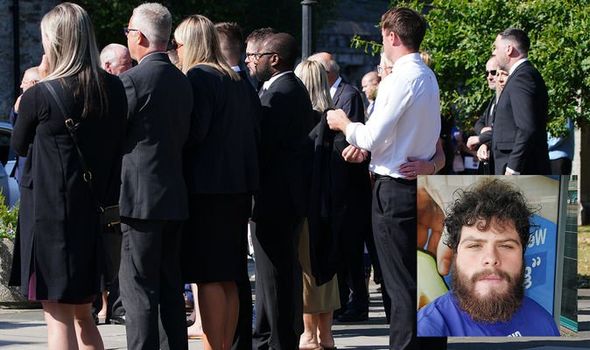 Lee Martyn, 43, had tried to save daughter Sophie after killer Jake Davison opened fire as the little girl pushed a toy pram in the street. Mortally wounded from a shotgun blast, Mr Martyn fell on Sophie in a bid to shield her from the killer.

Yesterday, around 300 mourners packed the Minster Church of St Andrew in Royal Parade, Plymouth, to pay their respects to Mr Martyn and Sophie.

Many others waited outside and watched the coffin being carried by six pallbearers.

Floral tributes in the silver-coloured hearse included a blue and white football adorned with an Everton FC badge.

One of the pallbearers carried a portrait of the little girl and her devoted father, smiling happily at the camera.

Davison, 22, shot dead Sophie and Mr Martyn shortly after he murdered his mother Maxine, 51, following an argument at a house.

Mr Martyn and Sophie were pronounced dead at the city’s Derriford Hospital, where his wife Becky is a nurse. It is not known if she was on duty at the time.

The couple, who also had a son, adopted Sophie two years ago.

Mr Martyn worked for the electronics firm Toshiba in Plymouth.

In a moving tribute shortly after the shootings, his cousin Jess Morcom said: “He had the kindest heart, would do anything for anybody and you only had to take one look at him to see how much he loved and adored his family, Bex and his children.

“Beautiful little Soph, my darling. How truly blessed we all were to have seen you grow into such a beautiful, funny and clever girl.”

During the 12-minute rampage in the Keyham area of Plymouth, Davison also murdered Stephen Washington, 59, and Kate Shepherd, 66, before turning the gun on himself.

It later emerged that he was obsessed with guns and the “incel” movement – meaning involuntary celibacy.

Devon and Cornwall Police are being investigated over their decision to hand back a shotgun and a firearms licence to Davison shortly before the shootings that shocked the nation.