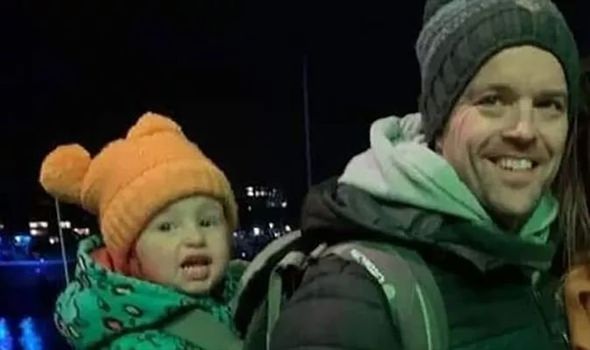 Sophie, described locally as the “sweetest, cutest little girl”, was shot dead with Davison’s legally-held shotgun alongside her adoptive father Lee moments later. His grief-stricken wife, Rebecca ‑ an intensive care nurse at the hospital where victims were taken ‑ was last night caring for the couple’s son.

It was reported that the inseparable dad and daughter were walking along the street in the city’s Keyham district when Davison, 22, walked out of his mother’s house on Biddick Drive and blasted them at random with his pump-action shotgun.

The gun-obsessed loner murdered two more innocents in a few minutes before killing himself as armed police swarmed in.

Fury erupted last night as it emerged his firearms licence and shotgun had been returned to him only last month after an allegation of assault.

The police watchdog has confirmed it will investigate the Devon and Cornwall force.

The others shot dead by Davison were named last night as park dog walker Stephen Washington and Kate Shepherd, who was hit once outside a hair salon and died soon after in hospital.

Tributes to the five dead victims poured in last night. One neighbour of the Martyn family said: “It’s just so awful. They were a perfect family.The sort you see in adverts. I can’t believe this has happened.

“Sophie was just the sweetest, cutest little girl. So, so lovely. This is absolutely devastating for Becky and for Sophie’s brother. Davison destroyed something so beautiful when he killed Lee and Sophie.”

Karl Fice-Thomson, who was a close friend of Lee’s for nearly 30 years, added: “Needless waste of 2 beautiful lives. A true gentleman and wonderful human being.

“Lee was a brilliant friend and was loved by a lot of people. He was a genuine, caring guy and an amazing husband and dad.

“Sophie was just a beautiful little girl, cheeky and full of life. What’s happened to them is the stuff of nightmares.”

Another local resident wrote of Lee: “You were such a kind, selfless, gentleman who put everyone else first. We have shared many memories together.

“I will never forget the things in life you have done for me, you will forever be in my heart Lee Martyn”.

Lee and Rebecca revealed they adopted Sophie in December 2019.

He said at the time: “We finally adopted Sophie after nearly 15 months! Game changer.”

A neighbour of Maxine Davison last night told how the mother and son “used to be close” but their relationship deteriorated as his hatred of women erupted. The resident said: “You’d always see him helping her with the shopping at Lidl up the road.

“But then his views changed and he went against women and he became misogynist. They clashed a lot about that.”

A close friend of Maxine’s, speaking through tears, said she was “always a lively, bubbly person. She never had a bad word to say about anyone. It’s a total shock. I can’t. She was a really nice person. She was always a happy, friendly person.”

Ben Parsonage was last night said to be recovering at home, while his mother stayed in hospital for surgery on a gunshot wound to an arm.

His brother Jordan said that both were “expected to make a full recovery”.

Neighbours said Mr Washington had been walking his two pet Huskies along a tree-lined path near the Davisons’ home when he was shot.

Mike Moore, who lives close by, said: “Both the dogs ran back to Stephen’s home and that’s when the family became concerned. Stephen was well-known around here because he was always out with his beautiful dogs. He wasn’t friends with Jake and there’s nothing connecting them so we think it was completely random.”

Shaun Sawyer, Chief Constable of Devon and Cornwall Police, said: “We’ve never in my time had homicide followed by a rampaging firearms attack on random members of the public and then taking one’s life.”

He described the shootings as “truly shocking” and said they had been witnessed by members of the public, who he urged to seek support.

But the police force was put under intense pressure last night as it emerged that Davison held a current firearms licence and had used a weapon held legally by him ‑ despite reports that his family had made repeated pleas for help from NHS mental health services.

Police spokesmen said Davison had a firearms licence in 2020, that there was no known motive at the time, and that the weapon ‑ which witnesses described as a pump-action shotgun ‑ was recovered from the scene of Thursday evening’s massacre.

Plymouth City Council confirmed that flags in the city were flying at half-mast, while the Smeaton’s Tower landmark was illuminated last night as a mark of respect for the victims.

Nick Kelly, leader of the council, said: “Plymouth is a city in shock. This is a city with a reputation for being friendly, for being safe.

“Details of what happened… are still emerging and it will be some time before we know the whole story, but we do know that Plymouth people have a history of coming together to support each other.

“Our thoughts are with the families of those affected by this awful tragedy and those who may have witnessed this distressing event.We are mourning with them.”

The council is working with police and organisations including Livewell, Barnardo’s and the Red Cross to offer support for the families and community affected.

The horrific events in Plymouth are thankfully very rare, as strong gun laws in the UK prevent US-style mass killings.

Devon and Cornwall Police will rightly face intense questioning over why Jake Davison was allowed to own a shotgun when there were significant concerns about his mental health and behaviour.

The Gun Violence Archive defines a mass shooting as an incident in which four or more people are killed, not including the shooter.

Thursday’s was the first mass shooting in the UK since 2010. During that time, the US had more than 3,000. A shocking report by the Legatum Institute also revealed “more than half of the 50 states have been subject to at least one mass shooting in every year since 2013”.

In the UK last year 30 people were shot dead ‑ four percent of all killings.

This is mainly down to significant changes to gun laws after the Dunblane massacre of 1996 when Thomas Hamilton opened fire at a primary school, killing 16 pupils and a teacher.

His handguns were owned legally with a firearms certificate. This led to the effective abolition of private handgun ownership, with more than 165,000 licensed handguns and 700 tonnes of ammunition handed in during an amnesty.

These changes followed adjustments that had been made a decade earlier, after a mass shooting in Hungerford in the south of England.

Then, most semiautomatic long-barrelled weapons were banned and some types of ammunition.

It is mainly criminal gangs who possess firearms ‑ there are not over-the-shelf guns available in the same way as there is in America.

And while the legal possession of so many types of firearms are outlawed, mass shootings will likely remain low.