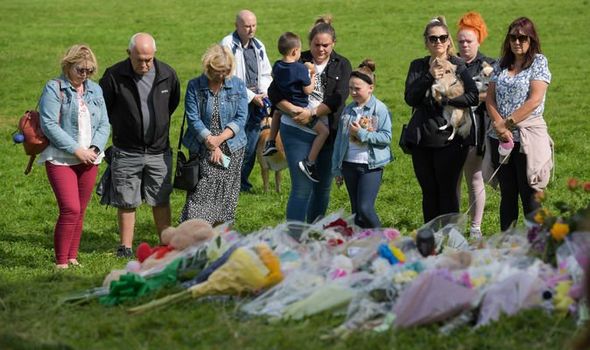 The friends were praised for their courage after they gave first aid to Kate Shepherd as she lay mortally wounded in the street even though gunman Jake Davison was nearby.

As Davison suddenly reappeared and started shooting in their direction, the two boys warned other people to flee and grabbed a young girl who was “frozen with fear” before running with her for cover.

Moments later they watched in horror as Davison turned the shotgun on himself and pulled the trigger.

A witness said: “The boys were incredibly brave. They came back to the wounded lady as well as comforting a man who was badly affected by shock. Their families are enormously proud of them and so relieved they were not hurt.”

Details of the boys’ courage emerged yesterday when Kevin Sproston, community leader of Keyham where the shootings took place, praised them after a minute’s silence for the victims at 11am.

Businessman Mr Sproston, a Royal Navy veteran, said the youngsters’ “brave actions had saved lives” and “been a constant source of inspiration to myself and others. I thank you so much.”

He was speaking at a tribute at Plymouth’s Guildhall, which began with a recording of Big Ben chiming five times ‑ one for each victim.

Davison, 22, first shot dead his mother Maxine, 51, apparently after a row. His next victims were three-year-old Sophie Martyn and her father Lee, 43, who tried to shield her as they were gunned down.

Davison then killed Stephen Washington, 59, a devoted dad and husband, as he walked his two huskies.

The final murder victim was Mrs Shepherd, 66, who died in hospital.

Michelle Parsonage, 53, and her son Ben, 33, were shot and wounded. Both have now left the hospital.

Addressing a crowd of 200 at the Guildhall, Mr Sproston, 37, said: “The solidarity, love and support shown towards Keyham has been overwhelming. It means a lot.”

People across the country took part in the silent tribute, including Boris Johnson, who observed it from the Cabinet Office of No 10.

The Government has announced that gun licence applicants will now have their social media accounts checked.

Davison had ranted against the world in general and women in particular on the internet but had his gun licence given back to him a few weeks ago after it was taken away following a violent incident last year.

Searches of his home will continue for several days, police said.