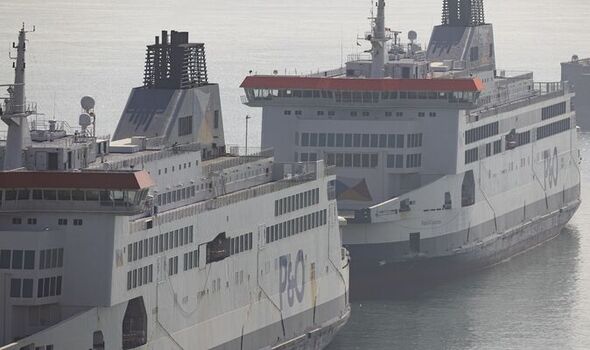 The transport giant sparked outrage when it dismissed 800 crew without notice and replaced them with agency staff on cheaper wages. Last night, the ferry European Causeway remained confined to the Northern Irish port of Larne due to “failures on crew familiarisation, vessel documentation and crew training”, the Maritime and Coastguard Agency (MCA) said.

A spokesperson added: “The vessel will remain under detention until all these issues are resolved by P&O Ferries. Only then will it be reinspected.”

The agency said there were no passengers or freight on board the vessel, one of two that sail between Larne and Cairnryan, in Scotland, when it was detained.

Yesterday protesters gathered in Liverpool, Dover and Hull as the RMT union urged a stop to the “P&O jobs massacre”.

The union also demanded the Government “seize the entire fleet”.

And the TUC tweeted a video they said showed dockers in Rotterdam refusing to load freight on to a P&O ferry set for Hull “in solidarity with the 800 seafarers illegally sacked”.

Transport Secretary Grant Shapps has said he will not compromise the safety of P&O vessels and insisted the company will not be able to rush training for inexperienced people.

And Boris Johnson has called for the firm’s chief executive, Peter Hebblethwaite, to quit. But Labour accused the Government of “sitting on their hands”, adding the “toothless response risks giving the green light to exploitation”.

It has written to Business Secretary Kwasi Kwarteng asking whether the Government will seek the removal of Mr Hebblethwaite as a director under the Company Directors Disqualification Act 1986, with Shadow Transport Secretary Louise Haigh also calling for the sacked workers to be reinstated. She tweeted: “The trained, experienced, loyal crew should be reinstated. And the Chief Executive should be barred as a director.The shameful misconduct of P&O Ferries has ruined livelihoods and is harming the UK’s key shipping routes.”

William McCaughey, the mayor of Larne, also voiced his support for the sacked crew. He said: “It is ridiculous what P&O has done. We would be very keen to see staff reinstated.”

RMT General secretary Mick Lynch said: “The seizing of the European Causeway shows that the gangster outfit P&O are not fit and proper to run a safe service.”