WARSAW — Despite making major gains in provincial assemblies, Poland’s populist ruling party suffered a sweeping defeat in municipal voting in a set of elections that concluded on Sunday, confirming that Poland is a nation ever more deeply divided between its liberal cities and its conservative countryside.

In elections for local and regional offices around the country, the governing Law and Justice won just four of 107 mayoral races, down from the 11 it won four years ago.

Yet the party secured the most seats in nine out of 16 provincial assemblies and won outright majorities in six of them — a significant gain from the one provincial government it controlled after the elections in 2014.

The recent elections, which were the first nationwide vote since Law and Justice swept to power in a parliamentary vote in 2015, had the highest turnout in local contests since the fall of communism in 1989. The turnout in the first round of balloting was 17 to 20 percentage points higher than that four years ago, and the turnout in the runoff round, which is usually lower, was in many places almost identical to that from the first round, said Lukasz Pawlowski, the head of the Institute of Local Government Studies.

“This never happens,” he said. “The emotions from the three years of Law and Justice in power are running incredibly high.”

The ruling party appears to have gained strength in poor and rural communities where its generous social policies, anti-immigrant sentiment, skepticism of the European Union, and message of national pride steeped in conservative values resonate most. But it lost ground among the more liberal, pro-European electorate in urban areas, failing to capture mayoralties in any of the major cities like Warsaw, Krakow, Wroclaw, Gdansk and Lodz.

That schism seems likely to continue into parliamentary elections next year.

Law and Justice led the balloting for provincial assemblies four years ago, but in several states it remained out of power, as opposition parties were able to piece together governing majorities. Its improved showing this year will give it outright control of several regions, though it remains to be seen whether it can form coalitions in others.

The first round of local voting was held on Oct. 21, though many of the results were not clear for days. In races for provincial assemblies, the leading candidates won even if they attracted less than 50 percent of the vote; in a mayoral election, if no one won a majority in the first round, a runoff was held on Sunday between the top two finishers. 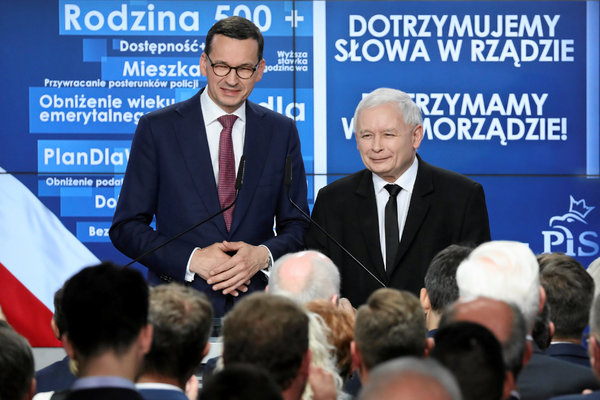 In many cities, notably Warsaw, opposition candidates for mayor unexpectedly won in the first round, without runoffs.

In the big cities, thousands of demonstrators have regularly filled the streets to protest government changes to the judicial system, including the forced retirement of more than two dozen Supreme Court judges. Critics say the changes undermine the independence of Polish courts.

The government’s attempts to reshape the judiciary have been deemed by the European Commission a severe threat to the rule of law. Poland became the first member of the bloc to trigger a process that could lead to it being stripped of its voting rights.

Two weeks ago, the European Union’s top court ordered Poland to suspend the law that purged the Supreme Court. It is not yet clear how the government will respond.

By Monday afternoon, most senior officials from the ruling party had yet to comment on the final election results.

Jaroslaw Sellin, a Law and Justice lawmaker and deputy minister of culture, said on Monday that his party “has a problem in big cities” that are “the base of the left-wing and centrist electorate.”

Mr. Sellin said that ahead of elections next year for the European Parliament and the national Parliament, the party will have to “analyze the problem thoroughly.”

“We’ll try to show these Poles that all the good policies of the current government are dedicated also to them,” he said in an interview with a private news channel, TVN24.

Grzegorz Schetyna, leader of the biggest opposition party, Civic Platform, said on Sunday that “Poles have demonstrated through great mobilization and high turnout that they want to defend the independence of institutions, the independence of local governments.”

“I’m convinced that next year, in the European election, Poles will also defend Poland’s place in Europe, and then, in the national election, they will defend our democracy,” he told his supporters.