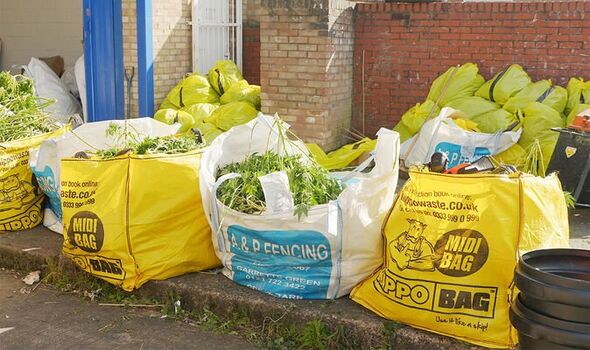 Officers made the find when responding to a call about a suspected burglary. The hundreds of cannabis plants, which contained “a large amount of bud”, were discovered at an industrial unit in Moss Road, Witham on Thursday.

Sgt Andy Christian said: “This is a significant cannabis factory in an industrial premises which has clearly been converted inside for the purpose.

“Our officers have seized around 900 cannabis plants and a large amount of bud.

“They have already spent two days at the scene and will be there for the rest of the weekend, dismantling the extensive growing apparatus and shredding the plants and buds ready for destruction.”

He added: “Meanwhile, we’ll have officers guarding the scene 24 hours a day until it has been cleared.

“Our inquiries are continuing to locate and arrest those responsible for this cannabis cultivation.

“The trade in illegal drugs, no matter what the class, is often linked to violence and causes misery to vulnerable people who are caught up in it, as well as affecting the local community.”

It follows recent reports of a cannabis farm worth more than £1million found by police in Newcastle.

At around 1.30pm on April 19, the force was made aware of suspicious activity at a home on Fenham Hall Drive.

When officers attended the seemingly empty property, they noticed the windows were open and a strong smell of cannabis was emanating from inside.

Once in, they uncovered a cannabis farm made up of around 3,265 plants worth around £1.37million spread out over three floors.

Five people were arrested at the scene and four have since been charged.

One man has since been released under investigation.

Detective Constable David Hodgson of Northumbria Police praised the rapid police response and described the property as one of the largest buildings he had seen used for this type of criminality.

He said: “This was a sophisticated set-up, hiding in plain sight, and I am pleased that the farm has now been dismantled and arrests made.

“This was a big operation with around 35 growing rooms spread across the property. The yield that we seized has the potential to be worth in excess of a million, and there is the possibility there have also been further yields this year.

“The men using the building did not have the owner’s permission to be inside and have caused around £100,000 worth of damage as well as bypassing the electricity.”

Det Con Hodgson added: “To be clear, our communities do not benefit from these so-called businesses.

“They often funnel their proceeds into further crime, exploit people and not only pose a health and safety risk to those inside the farms but to the wider community living nearby.”