Olivia, nine, was killed when a masked attacker with a gun entered her home in Liverpool at around 10pm.  The unknown gunman had targeted two men on Kingsheath Avenue, Dovecot. Oivia’s mum opened the door to see what was happening on her street before the first male target forced his way into the home.

The gunman followed before opening fire, with a bullet hitting Olivia’s mum, Cheryl, in the arm before fatally hitting the youngster who was standing behind her.

The assailant then shot the 35-year-old first male target before running away. A dark-coloured Audi then appeared at the scene and took him to hospital, leaving Olivia and her mum at the house.

Police arrived and rushed Olivia to Alder Hey hospital, where she later died. The 35-year-old first male target was arrested on a prison recall after breaching the terms of his licence. He will be recalled to prison to serve the remainder of his licence

Police have now said they know who the second male is who was targeted in Kingsheath Avenue.

They added that Cheryl was admitted to Aintree Hospital with her injury and has now been discharged. They did not confirm her condition. 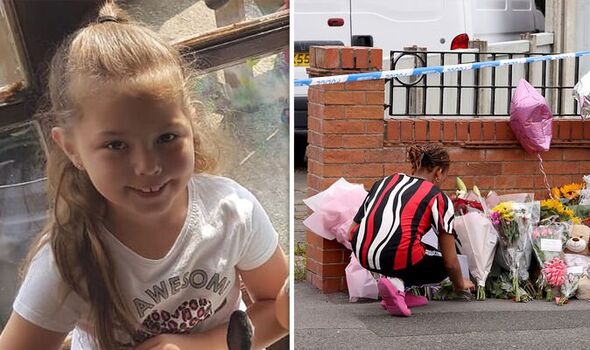 Thousands have since been raised for the family of Olivia, with Liverpool Echo and Merseyside Police urging people to come forward with information relating to Olivia’s murder, as well as the murder of 28-year-old Ashley Dale and 22-year-old Sam Rimmer, which also happened in Liverpool.

Anyone with information, footage or images regarding any of these incidents is asked to contact police via the following link Public Portal ( mipp.police.uk ), @MerPolCC or anonymously via Crimestoppers on 0800 555 111 with reference 22000621566.

Children yesterday consoled each by holding hands and laying flowers in tribute to the youngster.

One tribute read: “Words cannot describe how this tragedy has turned this city upside down. Our thoughts and prayers are with Olivia’s family at this sad time. Rest in Peace little one.”

Another said: “A precious little angel taken too soon. God bless. Sleep tight Olivia.” Another tribute said: “R.I.P Olivia feels like only yesterday you were in my garden laughing”.

One, signed from Aunty Kim and Uncle Tony, read: “Olivia, R.I.P baby girl, can’t believe what has happened. It is like a nightmare, we shall miss you so much our sassy queen”.