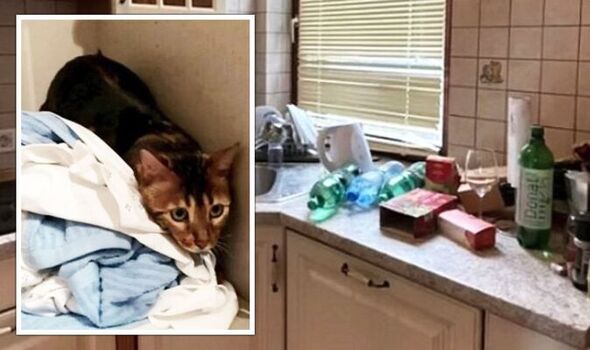 A woman who called the police to report her home had been seemingly broken into was stunned to discover the suspected burglar was actually her neighbour’s escaped pet cat. 28-year-old Noemi Zonta from Koper, Slovenia had returned to find her apartment in chaos and immediately relayed her concerns of a break-in to local police. After a two-hour-long investigation, officers found the feline culprit sheltering at the bottom of a wardrobe.

Ms Zonta, an entrepreneur, explained: “My partner and I live in a big house and we have three apartments.

“We live in one of them, we rent the second one and the third one is currently empty, my family sometimes use it for the weekend.

“My brother came by on Tuesday and he asked us if we were in that apartment because the apartment was a mess.

“We went to check the apartment immediately and we were 100 percent sure that someone broke in.”

Ms Zonta entered the home to find the kitchen in disarray, with all the drawers and cupboards pulled open and apparently rifled through.

As she moved into the bedroom, the scene became more alarming as she discovered the sheets were disturbed and there was urine on the covers.

She reported: “We didn’t want to touch anything because we wanted to leave the crime scene untouched.”

Responding to her complaint, two officers promptly arrived to investigate the suspected burglary.

Read more: Dad loses everything after being jailed for chasing burglars

The police took urine samples from the bed and scoured the apartment for footprints, but Ms Zonta explained the apparent crime remained a “mystery”.

She said: “There were no broken windows or doors and we were at home all the time. We – including our dog – didn’t hear or see anything and on top of everything, nothing was stolen.”

However, their confusion intensified when the testing results revealed the urine collected matched a cat, a pet the couple don’t own themselves.

Ms Zonta explained: “[Eventually] one of the investigators opened a closet in the bedroom and there was a cute, scared cat lying inside on a pile of bed covers. So the burglar was actually a cat who went inside and couldn’t get out.”

The cat was swiftly returned to a neighbour who had been scouring for their lost pet over the past few days, even distributing missing cat posters around the neighbourhood.

Ms Zonta said: “It turns out that my dad went inside an empty apartment on Saturday to get the keys to the basement and the cat sneaked in. Of course, he didn’t notice it and he locked the door.

“The poor cat was trapped inside for almost four days, made a mess in an apartment and scared all of us.”

The owner of the cat asserted the pet was a regular escapee but described the incident involving Ms Zonta’s apartment as the feline’s first real “adventure”.

Read next:
‘Depressed’ cat finds forever home after droop-eyed post goes viral
Cat reunited with her owners after she was missing for nine years
Pet owners warned about illness that is leaving cats and kittens blind
Mystery over banker’s death following row over smoking at pub
Pet chihuahua mauled to death by big cat