Animal Rebellion protesters are scaling the side of the Home Office in the hope of pushing world leaders into addressing carbon emissions from farming and fishing at COP26.

The protesters, part of an offshoot group of climate change group Extinction Rebellion, started climbing up a structure on the side of the Home Office in Marsham Street at about 6am on Tuesday.

They are currently half way up the side of the building and are planning on unfurling a banner when they reach the top. 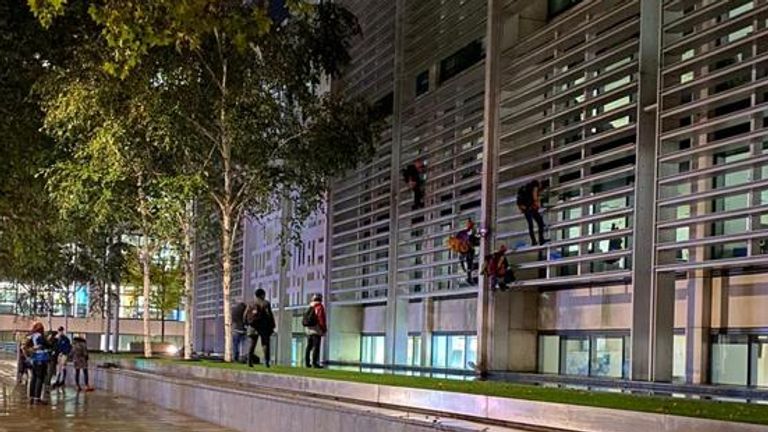 One protester told Sky News: “Ahead of COP26, we are calling for – no, demanding – that the world wake up and switch to a fully plant-based diet.

“If we don’t do this the government won’t address it.”

A leaflet protesters were handing out said the meat and dairy industries are some of the leading producers of greenhouse gases while fishing is “destroying our ocean ecosystems, contributing to dead zones and increasing acidification”.

It said world leaders at COP26, the climate talks due to start on Sunday in Glasgow, “cannot talk about meeting the Paris climate targets and securing net-zero emissions without addressing that our food system is destroying the planet”.

The group is also asking the government to “defund meat, dairy and fishing” and invest in a “just plant-based food system”. 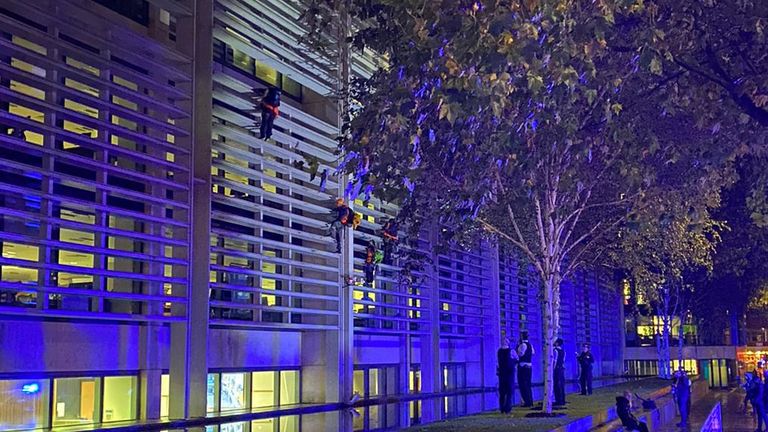 Police, the fire brigade and London Ambulance Service were on the scene not long after they started climbing but no arrests have been made.

A Met Police spokesman told Sky News: “Police were called at 06:09hrs on Tuesday, 26 October following reports that a number of protesters had scaled a government building in Marsham Street SW1.

“Officers are on scene with the London Fire Brigade. There have been no arrests at this time.”