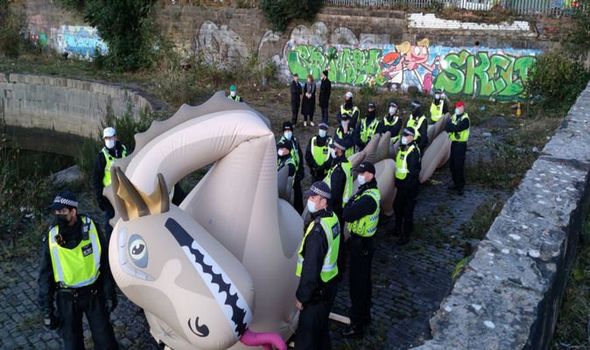 An eight-metre long inflatable Loch Ness Monster was seized by around 40 police officers during COP26 today. Activists, the Jubilee Debt Campaign, were protesting alongside the inflatable at the Govan Graving Docks this morning.

The campaigners were calling on rich countries to cancel third world debt as part of the global response to the climate crisis. They were holding signs reading “Drop The Debt Monster” and “Climate Change Now” next to the inflatable.

Police arrived on the scene at around 7am and “impounded” Nessie, much to the amusement and anger of the protestors, GlasgowLive reports.

One took to Twitter to write: “Our Loch Ness debt monster is being impounded by the police at COP26. We wanted to show that the global South debt crisis cannot be ignored if we are to achieve climate justice.”

Another wrote: “We came this morning to inflate the Loch Ness Debt monster and raise the importance of global South debt for the climate crisis. Instead, the police inbounded Nessie and tried to block our message, just like debt is being blocked from COP26 discussions.”

Eva Watkinson, head of campaigns at Jubilee Debt Campaign said: “The debt crisis facing lower-income countries has been excluded from debate at COP26 and now police have prevented the ‘Loch Ness Debt Monster’ from highlighting this fundamental issue.

“Lower-income countries’ unsustainable debt is preventing them from fighting the climate crisis. And when climate disasters hit, countries are pushed into further debt to pay for reconstruction.

“Rich polluting countries created the climate crisis and should take responsibility by cancelling the debts of countries that need it and ensuring climate finance is given in grants, not more loans.”

A Police Scotland spokesperson said: “Officers seized a large inflatable due to be launched on the River Clyde as it breached the maritime restrictions in place to maintain public safety and security close to the COP26 venue.”