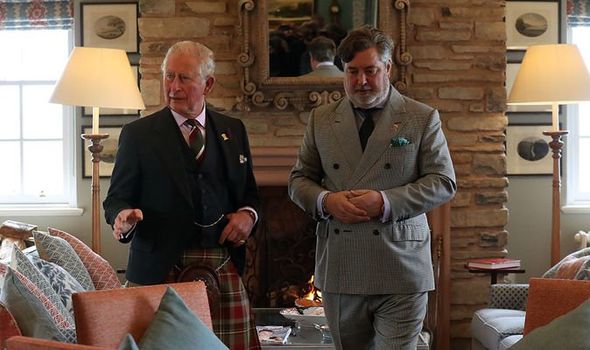 Former minister Norman Baker called for Scotland Yard to investigate after Michael Fawcett dramatically stepped down as chief executive of The Prince’s Foundation. The charity confirmed Mr Fawcett has temporarily given up the role while allegations relating to his dealings with Sheikh Mahfouz Marei Mubarak bin Mahfouz are investigated by its trustees.

Mr Mahfouz is said to have made several six-figure donations to the foundation, whose central aim is to “regenerate” Dumfries House, an 18th century mansion in Scotland.

He is the holder of an honorary CBE, one rank below a knighthood, which he received from Prince Charles in 2016.

Yesterday, a Sunday newspaper published a letter apparently signed by Mr Fawcett offering to make an application for Mr Mahfouz to be made a knight (KBE) as well as supporting his bid for British citizenship.

The letter, dated August 2017 and addressed to an aide of Mr Mahfouz, acknowledges the sheikh’s “ongoing and most recent generosity”.

The tycoon has stressed he had no expectation of any reward in return for his charitable donations.

A spokesman said Mr Mahfouz had “not had personal or direct communication to either request, influence or made any arrangements regarding citizenship or knighthood with Mr Fawcett, or anyone connected to HRH The Prince of Wales or The Prince’s Foundation”.

The spokesman added: “His Excellency had expressed an interest in applying for citizenship but in the end decided not to pursue that further.”

Lib Dem MP Mr Baker, a former transport minister, said: “It is a criminal offence to sell an honour under the Honours (Prevention of Abuses) Act 1925.

“I shall be writing to the Metropolitan Police Commissioner, Cressida Dick, to ask her to open an investigation.”

Former Palace footman Mr Fawcett was appointed the chief executive of the Prince’s Foundation in 2018 following a reorganisation of Charles’s charities.

He temporarily stepped aside on Saturday.

It is understood that Emily Cherrington, chief operating officer, will take over in the interim, and that the Scottish Charity Regulator has been informed as the Prince’s Foundation is registered in Scotland.

A spokeswoman for the charity said: “The Prince’s Foundation takes very seriously the allegations that have recently been brought to its attention and the matter is currently under investigation.”

Mr Fawcett began his royal service in 1981 as a footman to the Queen, rising through the ranks to sergeant footman and then Charles’s assistant valet.

In 2003, he was accused of selling unwanted royal gifts and pocketing a percentage of the proceeds. He was cleared of financial misconduct but resigned.

He continued to work closely with Prince Charles as a freelance fixer and party planner as well as picking up an undisclosed severance package.

The “cash for honours” allegations came a week after Prince Charles ordered an inquiry into claims that wealthy donors paid £100,000-a-head to dine with him and stay at Dumfries House.

Details of the alleged “cash for access” deal were contained in a leaked email from November 2019.

It revealed that a society “Mr Fixit” would get five percent of the deal.

Prince Charles has severed all his ties with the businessman who insisted it is normal practice for a go-between to take a commission.

A Foreign Office spokesperson said last night: “All nominations for Honorary Awards are subject to the same rigorous scrutiny and probity checks.”