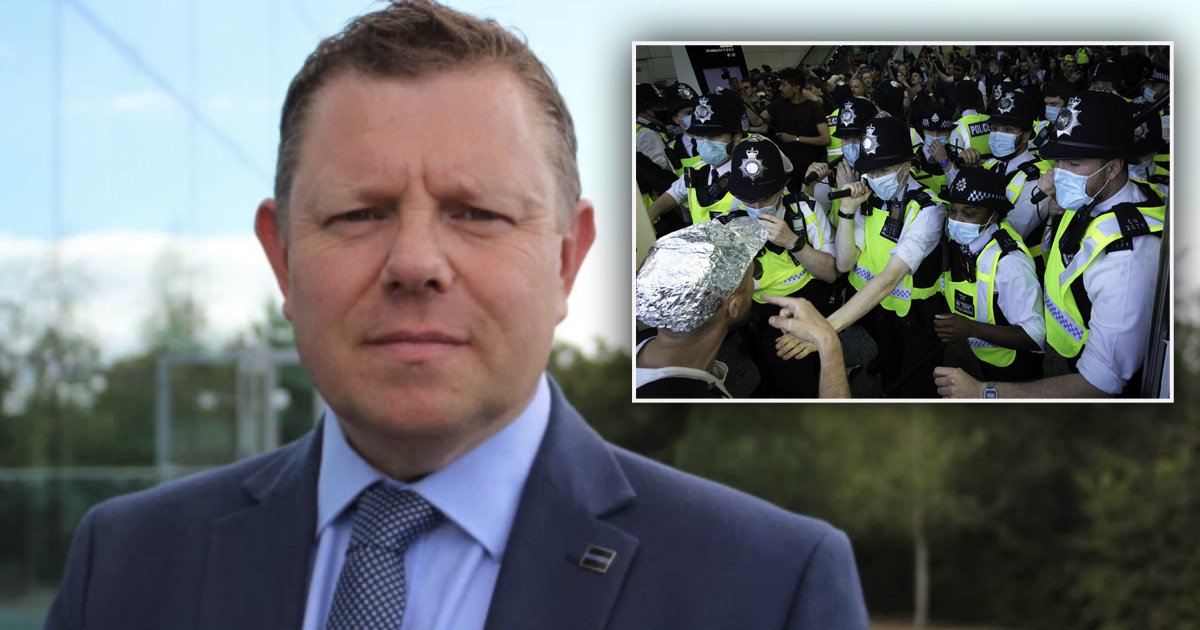 The head of the Police Federation has warned that officers are under ‘unrelenting pressure’ ahead of the June 21 reopening.

John Apter said his colleagues were ‘fatigued’ from being on the Covid frontline as they prepare to guard world leaders at the G7 Summit and return to concerts and football matches.

He also voiced fears that officers tasked with upholding public order may have been turned into ‘super-spreaders’ by not being prioritised in the Government’s vaccination roll-out programme.

Mr Apter spoke to Metro.co.uk ahead of the Police Federation of England and Wales’s annual conference next Wednesday and Thursday, which has the theme of ‘Policing Under Pressure’.

The organisation’s National Chairman, told of the impact of 15 months spent enforcing a plethora of Covid rules amid a rise in assaults on emergency workers.

He said: ‘As with many other parts of the public sector, the pressure has been relentless and policing is suffering from fatigue.

‘The impact of the pandemic has been devastating for everybody but for policing in some cases it’s been intolerable.

‘In the early days of the pandemic less people were on the streets and less crimes were being reported, but we were still reacting to things like crime behind closed doors and domestic violence.

‘Then we had almost eighty legislative changes around Covid for understandable reasons which had not gone through the normal parliamentary process.

‘We were trying to interpret laws versus guidance and there was an awful lot of confusion with the public over which was which.

‘Once the lockdown started to ease we had super Saturday which created a frenzy with people going out and getting drunk, which clearly doesn’t mix with social distancing.

‘It has put a massive strain on the relationship between the public and the police, which is continuing.’

The virtual conference follows a year when officers’ actions came under intense scrutiny, including at protests where they became the focal point of controversial Government policies.

A significant police presence will be required at this weekend’s G7 Summit in Devon, followed by so-called Freedom Day just over a week later.

Mr Apter said officers still do not have the level of vaccine protection required as they prepare to get ‘up close and personal’ with potentially large and volatile crowds.

Police were not included in the nine priority groups in the early phases of the roll-out, in which the Joint Committee on Vaccination and Immunisation (JCVI) put health workers, over-80s and care home staff and residents at the head of the queue.

Despite lobbying by the Federation, the JCVI did not prioritise officers as a specific group, despite its early recommendation that people in the ‘criminal justice system’ should be high on the list in the later phases.

Mr Apter said: ‘The vaccination programme is fantastic but I still feel bitter about the fact the Government let my colleagues down by failing to prioritise them after the most vulnerable and those in the NHS.

‘Without doubt it put my colleagues, their families and the public at risk. By the nature of policing, police officers could and may well have become super-spreaders.

‘We have officers from all over the country going to the G7 and many of them, because of their age, will be at risk along with their families because they have not been vaccinated.

‘The Government have been supportive but this feels like a betrayal and it will not be forgotten.’

He said: ‘All these events will have to be policed. The officers have no choice, they have to get up close and personal and they have to make arrests.

‘We have lost thirty police officers and staff who have died because of Covid. Proportionately, it is not a high figure but what we have had are many thousands of officers who have been off work because they have had to isolate or have caught the virus.

‘While we do what the Government and society expect of us, we are not immune to the virus.

‘We are picking up the pieces and slowly getting back to normal but the pressure is rising again because we see the protests and people are out more and crime starts to rise slightly.’

Emergency workers on the frontline during the pandemic have faced a rising tide of assaults, according to figures gathered by the National Police Chiefs’ Council.

This week it emerged that ambulance crews are to wear body-worn cameras in order to increase their safety.

Mr Apter said: ‘People have been deliberately coughing and spitting at police officers and saying, “I’ve got Covid and I hope you catch it and die”, that’s been a horrible by-product of the virus.

‘That’s something my officers face every single day. They are also faced with people stuffing camera phones in their faces with the footage being uploaded to social media with no context.

‘My colleagues feel that it’s then seized on in certain sections of the media and we’re turned into the villains of the pandemic.

‘I’m not saying we always get it right because policing is dynamic and we are human beings. Yes, there were mistakes, especially with the legislation changing so many times, but it wasn’t malicious, we were doing what we could to try and save lives.’

Mr Apter, who will be among the keynote speakers at the conference, wants an array of changes to better protect officers.

‘I called for stronger, harsher sentences for those that attack police officers and while that’s happening it only works if the judges and magistrates implement the sentences, and that’s where the guidelines need to be fit for purpose,’ he said.

‘Then it’s the equipment, more access to Taser, better training, better ways that officers are deployed, it’s the whole gamut.

‘We also need to look after our own people after they’ve been assaulted or if they’ve had a breakdown. We are flesh and blood, just because we carry a warrant card we are not immune from the fragilities of what society throws at us.’

In February, Matt Hancock said any officer over the age of 50 would be included in the initial vaccine roll-out.

The Health Secretary told a media briefing that ‘we recognise the vital role that the police continue to play in the pandemic but it is down to the JCVI to make formal decisions on vaccinations’.

Metro.co.uk has approached the Home Office and the Department of Health and Social Care for further comment.