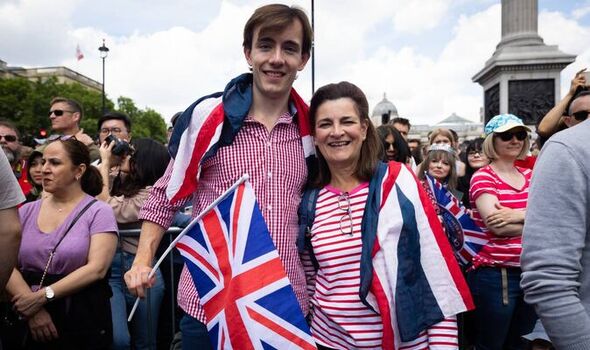 Polling shows overwhelming support for proposals backed by senior politicians and royal experts to create an annual day of thanksgiving for Her Majesty. The country is currently enjoying an extended four-day bank holiday weekend to mark the Platinum Jubilee.

Thursday’s extra day was added to the holiday calendar to mark the occasion and paired with the traditional spring bank holiday which was moved from Monday to Friday this year.

It saw thousands of revellers pack the Mall to witness the Trooping the Colour – with an estimated 16,000 street parties being held across the country.

Now a permanent bank holiday to honour the Queen is being backed by 65 per cent of the population – with just 21 per cent of people against – according to a survey for the Sunday Express by Redfield andWilton.

It comes as charities, businesses and celebrities push for a “thank holiday” to mark the Queen’s extraordinary service and the work of millions of people who have served their communities, including during the pandemic.

Among those in favour is former EastEnders star Ross Kemp.

“We’ve seen the public response this weekend with a record-breaking ‘thank you’ party to unite the nation,” said the TV tough guy who played Grant Mitchell in the BBC soap.

“Let’s make this an annual tradition in honour of Her Majesty; a day when we all come together.”

His words were echoed by former Conservative leader Sir Iain Duncan Smith, who called on the Government to listen to the voice of the people.

“Industry leaders want a special day to celebrate our remarkable sovereign, so do MPs and the vast majority of the British public,” he said. “It is time for the Government to act.”

Other supporters include senior backbench MP Tom Tugendhat, chairman of the Commons Foreign Affairs Committee, who said an extra bank holiday would be a great tribute.

“Queen Elizabeth has been an inspiration to generations of Brits and many others around the world,” he said. “It would be a great tribute to a great monarch to celebrate Queen Elizabeth’s Day every year.”

Mitchell said the holiday would “reflect our feelings of gratitude and respect”.

And Liberal Democrat leader Sir Ed Davey also throwing his support behind the proposal, said: “Seeing how the people of Britain have come together to celebrate Her Majesty’s remarkable reign has been truly heartwarming.

“After such a challenging couple of years, seeing families sharing in the festivities has reminded us all of the great community spirit of our nation.

“The Liberal Democrats and I believe that is why it would be an excellent idea for annual bank holiday, so Brits can raise a toast to The Queen for her years of commendable public service.”

Business leaders are also keen on an extra bank holiday .

John Longworth, chairman of the Independent Business Network, suggested it would be good for the economy.

“Evidence shows it is as likely to boost the economy and improve productivity,” said Mr Longworth, a former director general of British Chambers of Commerce.

“What this Jubilee has shown is that people support the monarchy and are as patriotic as ever.”

Businesswoman and Dragons’ Den star Deborah Meaden said: “Businesses want it, the people want it. Now we just need government to do the right thing and honour Her Majesty with a day dedicated to her example of service.”

Royal author Margaret Holder said a permanent holiday would ensure the Queen’s achievements were not forgotten: “A bank holiday in coming years would celebrate the Queen’s long reign and give everyone an occasion to reflect on Elizabeth the Second in perpetuity,” she said.

And former BBC royal correspondent Michael Cole said: “Compared with Europe where there is a public holiday every couple of weeks, the UK has been tight with bank holidays.

“But the case for a one-off day to say ‘Thank you for everything’ to a monarch who has given everything unsparingly would be a fitting way to celebrate an unequalled reign and a life well lived in the service of Crown, country and Commonwealth.”

But a note of caution was sounded by royal biographer Hugo Vickers, who said the Queen might have doubts about a holiday in her name.

He said: “An extraordinary number of people have come out to show their deep appreciation for all she continues to do to unite this country and I believe they’d all come out again at any available opportunity. I’m not so sure Her Majesty might be so keen. She may feel it would be a little too much too soon.”

The Thank Holiday campaign is backed by organisations including the Royal Voluntary Service, Scouts, the Confederation of British Industry, Hospitality UK and the Trade Union Congress.

Supporters also include the Archbishop of Canterbury and campaigner Brendan Cox, husband of murdered MP Jo Cox and founder of the Together Coalition.

He said: “At a time when it’s hard to get people to agree on anything, the level of support for annual day of thanksgiving in honour of Her Majestythe Queen is nothing short of spectacular.

“As this weekend has shown, we are all looking for opportunities to connect in our communities.

“It’s time the Government did the right thing.”