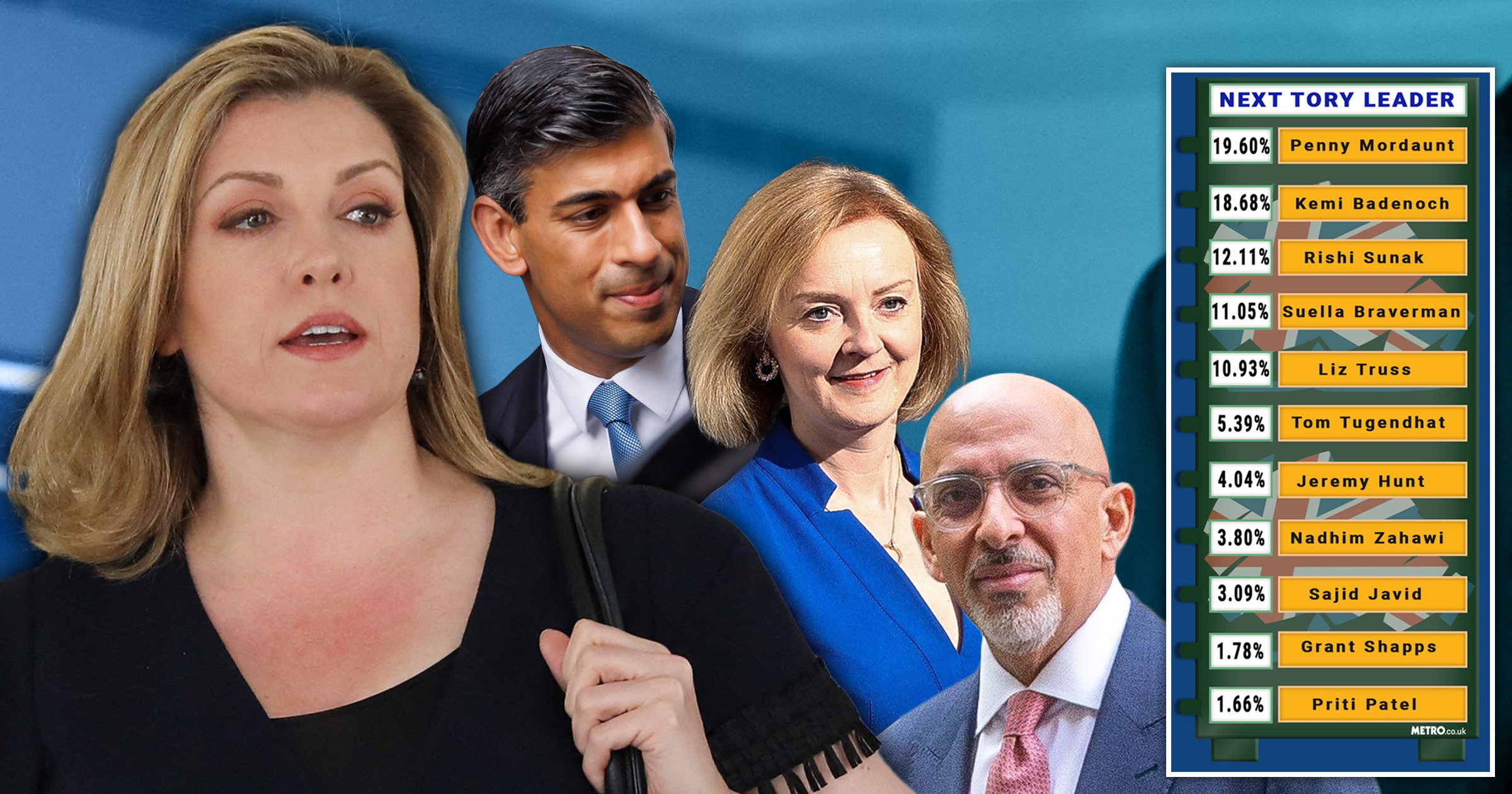 A new poll of Conservative Party members suggests Penny Mordaunt is the emerging front runner in its leadership race.

Briefly the defence secretary under Theresa May and currently the international trade minister, the Portsmouth North MP was backed by almost 20% of Tory members in a survey by Conservative Home.

Miss Mordaunt is closely followed by former local government minister Kemi Badenoch, on nearly 19%, with ex-chancellor Rishi Sunak in third position on around 12%.

Attorney general Suella Braverman and foreign secretary Liz Truss both received support of about 11% of those asked.

The results could give an early indication of who might end up being the country’s prime minister if they are elected as the leader of the party by members.

Some 842 Tory members were polled in the Conservative Home survey, but there are around 200,000 current members of the party. In the last leadership race in 2019, which saw Boris Johnson elected, there was an 87% voter turnout.

Some 11 hopefuls have thrown their hats in the ring so far, but this is expected to be slimmed down relatively quickly.

There are still several rounds to go through, with candidates requiring 20 nominations from other Tory MPs by the end of today to be officially considered.

An MPs’ vote will then take place – with the first ballot tomorrow – to gradually whittle down the remaining nominees, with just two candidates going forward into a postal ballot of party members as part of the last stage.

The new leader of the Conservatives will be announced on September 5, which means they will also become the prime minister.

In the meantime Boris Johnson will remain as caretaker prime minister for around two months.

Sir Graham Brady, chair of the 1922 Committee, said the date offered a ‘perfectly reasonable’ timetable that would allow hustings to take place around the country over the summer.

Bob Blackman, joint-executive secretary of the committee which is comprised of all backbench Tory MPs, told Sky News: ‘We’ve got to slim down the list of candidates pretty quickly to two.

‘And the one thing that we’re committed to do is to achieve getting to two candidates by Thursday July 21.

‘That means that we’ll hold a succession of ballots over the next few days in order to get to that position.’

Currently Mr Sunak is in the lead for individual MP nominations, with 37 supporters as of 6pm last night.

Miss Mordaunt is in second place and backbencher Tom Tugendhat has also passed the threshold, with the intentions of more than 150 Tory MPs confirmed so far.

But the international trade minister remains a favourite with the bookies, with her odds at 7/2 yesterday according to Ladbrokes.

Miss Mordaunt rose to prominence in 2019 as the UK’s first ever female defence secretary, and is a Brexiteer and Royal Navy reservist. She was previously the minister for women and equalities.

She played a prominent role in the Leave campaign in 2016 and has recently sought to distance herself from the drama in Westminster.

Despite her popularity Miss Mordaunt’s leadership bid got off to a rocky start yesterday, after Paralympic athlete Jonnie Peacock asked to be removed from her promotional video.

She was forced to make a further edit after murderer Oscar Pistorius made an appearance as part of footage from the 2012 Olympics – two years before he was convicted of killing his girlfriend Reeva Steenkamp.

The ‘cringe’ video was compared to the sketch show ‘Little Britain’ and also featured an identifiable police officer, who would not be allowed to appear in political campaign material.

Miss Mordaunt has also been accused of backtracking on previous comments in 2018 supporting transgender rights after some people criticised her for being ‘too woke’.

She tweeted on Sunday: ‘I am biologically a woman. If I have a hysterectomy or mastectomy, I am still a woman. And I am legally a woman.

‘Some people born male and who have been through the gender recognition process are also legally female. That DOES NOT mean they are biological women, like me.’