The Pope has arrived in Iraq for an historic weekend visit which carries both symbolism and risk.

With a message of inter-faith tolerance, Francis will spend four days in Iraq in what is his first foreign trip in more than a year and the first-ever papal pilgrimage to the war-hit nation.

Francis, who wore a facemask during the flight, kept it on as he descended the stairs to the tarmac and was greeted by two masked children in traditional dress. A red carpet was rolled out at Baghdad International Airport with prime minister Mustafa al-Kadhimi on hand to greet the pontiff.

A largely unmasked choir sang songs as the Pope and Mr al-Kadhimi made their way to a welcome area in the airport.

The Pope has since been welcomed to Iraq’s presidential palace by the country’s president Barham Salih. 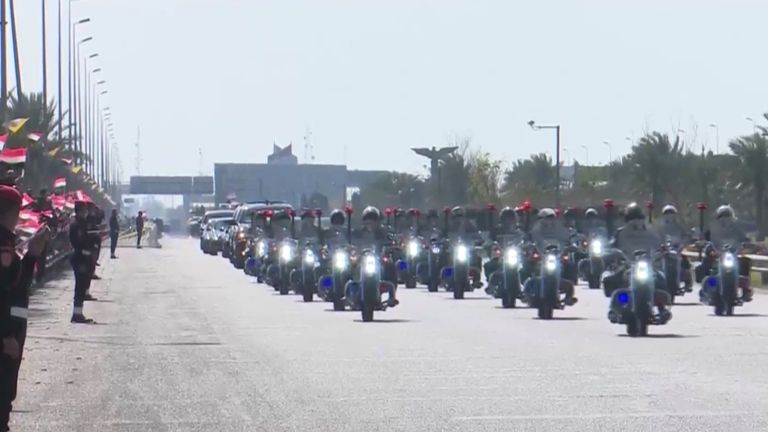 The Pope will also visit the holy city of Najaf in the south, the ancient birthplace of Abraham at Ur and Mosul in the north, which became the capital of the so-called Islamic State (IS) in 2014 until its defeat in 2017.

Iraqis have been keen to welcome him and the global attention his visit will bring, with banners and posters hanging high in central Baghdad, and billboards depicting Francis with the slogan “We are all Brothers” decorating the main thoroughfare. 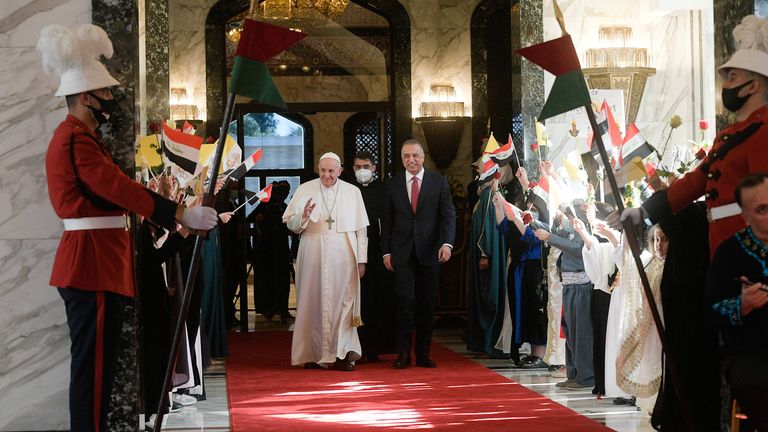 In a video address before leaving the Vatican, the Pope said: “I have greatly desired to meet you, to see your faces and to visit your country, an ancient and outstanding cradle of civilization.

“I am coming as a pilgrim, as a penitent pilgrim, to implore from the Lord forgiveness and reconciliation after years of war and terrorism, to beg from God the consolation of hearts and the healing of wounds.”

In Mosul, which was liberated from the Islamic State by the Iraqi military in 2017, the Pope will hold a vigil in Hosh al Bieaa (Church Square) where he will pray for the victims of war.

He will then head east to the town of Qaraqosh for a Sunday service of prayer and remembrance at the Immaculate Conception Church.

The church was one particular focus for the Islamic State’s widespread barbarism. IS followers used the church courtyard as a firing range. Furniture, statues, bibles and prayer books were also burnt in the courtyard and a black mark on the ground marks the spot where the desecration took place.

Before the 2003 US-led invasion of Iraq, an estimated 1.5 million Christians lived in the country.

Today, only about 200,000 remain, the rest have been driven out by sectarian violence.

Reconciliation between Christians and Muslims is a key message and the Pope will hold inter-religious meetings on Saturday at Ur. The archaeological site is thought to be the birthplace of Abraham, the patriarch of the three monotheistic faiths – Christianity, Judaism and Islam.

Among the most symbolic moments will be a meeting with Grand Ayatollah Ali al Sistani, the spiritual leader for millions of Shia Muslims and one of the world’s most influential Islamic scholars.

The two elderly men – the Pope is 84 and the Grand Ayatollah is 90 – will pray together in the holy city of Najaf. It is thought to be the first ever encounter between a pope and an Iraqi grand ayatollah. The whole trip has been in jeopardy because of the dual threat of sectarian violence and the coronavirus pandemic.

Six weeks ago, two suicide bombers detonated bombs at a busy market in Baghdad killing at least 32 people. It was the first large-scale attack in the country for three years.

Followers of the Islamic State, who remain active in the country, are thought to have been responsible.

And this week, one person died after rockets hit a military base used by American forces west of Baghdad.

Militia aligned to Iran are likely to have been responsible – a retaliation for a US strike on Iranian militia targets along the Iraqi-Syrian border.

The coronavirus pandemic continues to hit Iraq hard with the country experiencing a new wave of cases.

Data from Wednesday showed 5,173 new cases with a seven day average of 4,095 cases a day. At least 13,000 people are known to have died after contracting the virus. The Iraqi government has imposed new lockdowns and the Vatican’s own ambassador to Iraq, Archbishop Mitja Leskovar, announced on Sunday that he had contracted the virus.

But Vatican officials say the Pope has been determined that the trip should go ahead.

Francis has received a vaccine and the entourage of officials and journalists traveling with him have also been vaccinated.

Iraqi authorities say they are confident that the risks can be managed. Vatican spokesman Matteo Bruni described the visit as safe and socially distanced.

“All the precautions have been taken from a health point of view… The best way to interpret the journey is as an act of love; it’s a gesture of love from the Pope to the people of this land who need to receive it,” Mr Bruni told reporters before leaving Vatican City.

The Pope will hold a mass in a football stadium in the Iraqi-Kurdish city of Erbil on Sunday and concern remains about how spontaneous crowds can be prevented from gathering at all the events.

Iraq only received its first batch of vaccines four days ago, with 50,000 doses of the Chinese-made Sinopharm vaccine donated by the Chinese government arriving on Monday.

The country has also agreements to receive vaccines in due course from AstraZeneca and Pfizer. 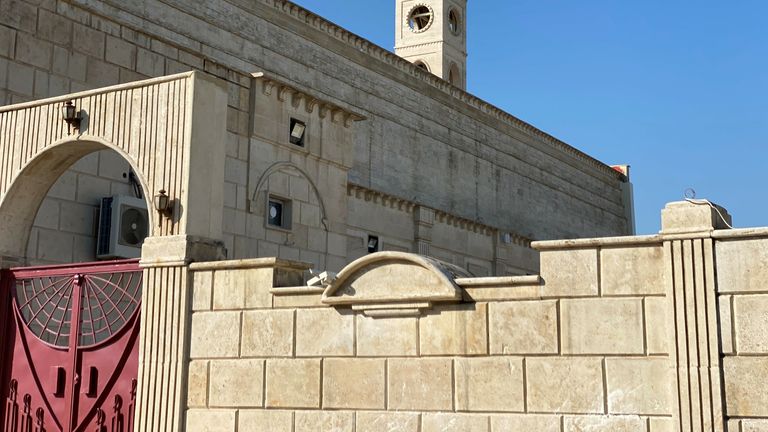 Analysis: This is a poignant trip for Christian communities who have suffered so much

“We are all brothers” – the motto for this rather extraordinary papal visit to Iraq.

The words, from Matthew’s gospel, represent the central message the Pope wishes to carry with him on a trip that is full of symbolism and solidarity but jeopardy too.

With sectarian violence a continued danger across Iraq and coronavirus cases again on the rise, it’s fair to wonder, why now?

Aside from the officials and journalists within the papal bubble, almost no one who encounters the Pope on this trip, or mixes with other faithful followers at his various events, will have received a vaccine.

And the separate headache for the papal security detail doesn’t bare thinking about.

Nevertheless the trip has gone ahead. Pope Francis was determined it would.

The only other time a Pope tried to visit Iraq (John Paul II in 2000), a diplomatic falling out between the Vatican and then-President Saddam Hussein put a stop to it.

“The people cannot be let down for a second time. Let us pray that this trip can be carried out well,” Pope Francis said as he prepared for the visit.

Inter-faith solidarity and fraternity is a key focus for this Pope at a time when polarisation between religions is increasing especially across the Middle East.

The 90-year-old Shia cleric is one of the world’s most influential Islamic scholars. 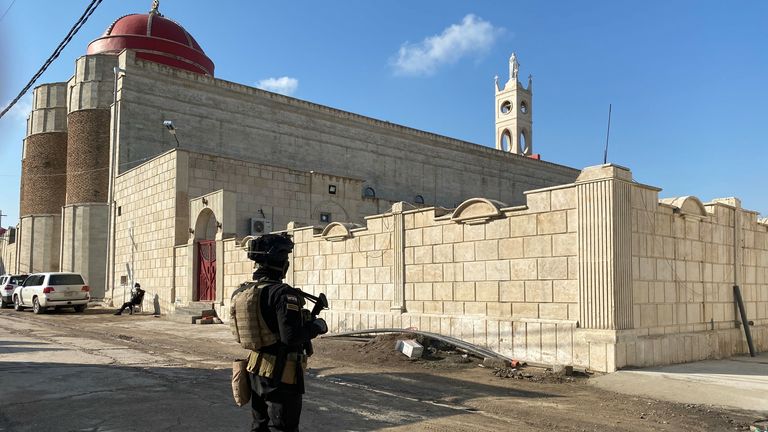 The papal aspiration under Francis is a broad interfaith communion. He is being criticised for irresponsible timing but his people insist precautions for everyone are in place.

The trip strikes a particular poignancy for the Christian communities who suffered so much, so recently, at the hands of ISIS.

Other minorities suffered as well, of course – the Yazidis particularly, and Muslims too; anyone who didn’t buy into the Islamic State’s warped doctrine.

It’s remarkable that he will visit sites of such recent brutality. Remember the beheadings? The cages where people were burnt alive?

For communities of faith who lived through this, the visit will have real meaning.

Persecution of minority groups like Christians in Iraq didn’t begin with the Islamic State.

Over the past 20 years, the Christian population in Iraq has shrunk by 80% according to US State Department analysis.

An Iraqi census carried out in 1997 concluded that there were 1.4 million Christians in the country. Today there are less than 250,000.