LONDON — For months, European countries have seesawed between craving and rebuffing AstraZeneca’s vaccine, with the shot’s fortunes rising and falling on spats over supply and on questions over the efficacy of the vaccine itself.

But few concerns have proved as disruptive to the rollout of the world’s workhorse vaccine in Europe as reports of very rare blood clots in some recipients. Many countries responded by halting the shot’s use, only to start giving it again after an all-clear from regulators at the European Medicines Agency, and then stopped inoculations a second time in certain age groups after doctors became more concerned about the clots.

On Tuesday, those concerns were reinforced yet again when a top vaccines official at the European Medicines Agency said that the vaccine was linked to extremely rare, though sometimes fatal, blood clots in a small number of recipients. It was the first indication from an international regulatory body that the clots may be a real, if very unusual, side effect of the shot.

Regulators now appear to be considering issuing their first formal warnings about the potential side effects — not only in continental Europe, which has long been wary of the shot for political and scientific reasons, but also in Britain, the birthplace of the AstraZeneca vaccine and long its biggest champion, where new data have sown concerns as well.

The University of Oxford, which developed the vaccine with AstraZeneca, said on Tuesday that it had suspended a two-month-old trial of the vaccine in children and teenagers in Britain while it waits for regulatory guidance. 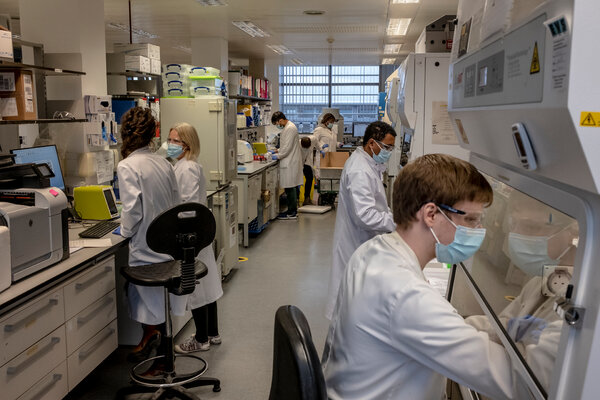 The looming concerns are threatening to ripple worldwide and cloud the global rollout of a cheap and easy-to-store vaccine, one that remains many countries’ best hope for saving lives amid a widespread surge in coronavirus cases. At least 94 countries of varying income levels have administered doses.

Most scientists and health officials say that the vaccine’s benefits still far outweigh the risks in older people, who appear less susceptible to the clots. Several dozen cases of the blood clots, mostly in younger people, have been recorded among the tens of millions of people who have received the vaccine across Europe.

But more countries could restrict the vaccine’s use in younger people, setting back efforts to inoculate enough people to reopen struggling economies. The European Medicines Agency said it will meet this week to consider updating its guidance.

That agency and the World Health Organization have said that no causal link between the vaccine and clots had been proved and advised that suspending the shot would cost more lives than it saved.

Regulators in Britain, where the shot is the backbone of the country’s speedy inoculation program, have also insisted that the vaccine’s benefits far outweighed the risks. They and the company cited a lack of evidence in Britain that the clotting events were any more common than would be expected among people who had never been given AstraZeneca’s vaccine.

But the evidence changed last week when Britain reported 30 cases of the rare blood clots, 25 more than previously. This week, a prominent scientific adviser to the British government said there was “increasing evidence” of the clots being associated with the vaccine.

Nonetheless, news reports indicated that British regulators were considering updating their guidance on its use in younger people, who are believed to be more susceptible to the side effects.

“No vaccine, no medicine, is risk-free,” said the government scientific adviser, Neil Ferguson, an epidemiologist at Imperial College London. He added that British regulators were “considering this matter very urgently.”

For the AstraZeneca vaccine, the latest concerns have added a new chapter to a tumultuous rollout in Europe. In Germany, health officials initially broke with European regulators in mid-February and recommended that the shot be given only to adults under 65, citing insufficient clinical trial data on its efficacy in older people. As a result, most of the Germans first given the vaccine were medical workers and teachers, many of them women.

That may be one reason the possible side effects showed up sooner in Germany and elsewhere in Europe, rather than in Britain, where the vaccine was first rolled out among older people and has only recently been administered to younger age groups.

On March 15, Germany’s health minister announced the country was suspending use of the shot, over blood clotting issues. Health officials there reversed course after European regulators determined that the risk was so low that it would be more dangerous to withhold the vaccine.

Last week, Germany flip-flopped again, recommending that no one under 60 years old be given the vaccine. Since then, the Netherlands has followed suit. Other countries, like France and Canada, have also suspended use of the vaccine in younger people. Norway and Denmark have put a total stop on the shot while they investigate.

Believed to be more common in younger women, the cases are an unusual condition in which clots are combined with unusually low levels of platelets, a disorder that can lead to bleeding.

The vaccine appeared to be causing an immune reaction in which antibodies bind to platelets, activating them, Andreas Greinacher, a German doctor leading an investigation at the University of Greifswald, said at a news conference on Wednesday.

Those platelets, in turn, were triggering the formation of dangerous clots in certain parts of the body, including in veins that drain blood from the brain, leading in some cases to a rare type of stroke.

Why exactly the vaccine was giving rise to those antibodies remained unclear. He said there was no evidence that pre-existing conditions disposed certain people to to the side effects.

“What we can clearly say is that the thrombosis complications are linked to these antibodies,” Dr. Greinacher said, referring to the clots.

Doctors and health officials appeared to be growing more confident that the blood clots were a genuine, though as yet unexplained, response by very small numbers of people to the AstraZeneca vaccine.

European regulators were analyzing 44 cases of the rare clots in the brain, 14 of them fatal, out of 9.2 million people given the vaccine across Europe. For people under 60, who account for most of the cases, that translated to a risk of one in 100,000, Emer Cooke, the European Medicines Agency’s director, said.

In Britain, regulators reported 30 cases of the rare blood clots combined with low platelets among 18 million people given the AstraZeneca vaccine. That translated to roughly one case in 600,000 recipients of the vaccine.

European countries’ divergent approaches to the vaccine stem from a number of factors, including the supply of vaccines and severity of the pandemic. Marco Cavaleri, the official at the European Medicines Agency who spoke about the link between the vaccine and blood clots, said on Tuesday that those factors would likely continue to dictate how countries used the shot.

Beyond those factors, countries also took very different approaches to managing risk, scientists said. Countries that have continued using the shot were more focused on securing the overall health of their citizens. Others were more preoccupied with minimizing the risk to any single person.

“The attitude here is more, ‘Get me out of the pandemic,’” said Penny Ward, a visiting professor in pharmaceutical medicine at King’s College London, referring to the British approach. In continental Europe, she said, “There seems to be a much higher emphasis on individual safety in the population.”

Adriano Mannino, a philosopher at the University of Munich and director of the Solon Center for Policy Innovation in Germany, said that the collective benefits of the vaccine dominated thinking in Britain, while Germans were more concerned with the risk of an injection going wrong in individual cases. That reflected, partly, Germany’s history with the Nazis, who conducted lethal experiments on people.

“In many areas where law has to regulate ethically delicate and potentially dangerous things,” he said, “the German state has tended to go for tough restrictions.”

Nevertheless, Germans over 60 — the age group still being given AstraZeneca’s vaccine — flooded hotlines to book appointments and stood in line for hours in recent days as eligibility restrictions for their age group were relaxed.

In the northeastern city of Wismar, several hundred people waited for up to five hours on Tuesday in a driving wind and mix of rain and snow to receive the shot.

“I wish there had been better weather,” Kerstin Weiss, the head of the district authority in the northeastern region, told public broadcaster NDR. “But honestly, this is a sign that people are willing to be vaccinated with AstraZeneca.”