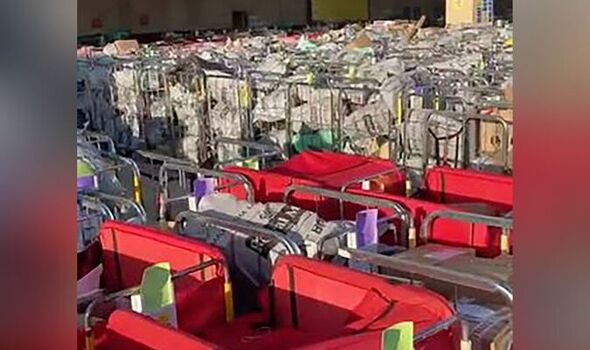 Mountains of post has been piling up at Royal Mail centres across the country amid ongoing strikes.

The pictures, which were sent to the Mirror, were taken before today’s walkout by 115,000 workers even began.

A source at the Communications Workers Union described the scenes as “chaos” and said they were “highly unusual,” even at this busy time of year in the run-up to Christmas.

But Royal Mail said the scenes are “typical” in December and that letters are only left outside for short periods of time when it is safe, hygienic, and dry.

The company said the photos were taken just as trucks were unloaded and cages were ready to be moved inside.

The union source said deliveries were about a week behind schedule, adding: “Royal Mail are deluded. In mail centres the Christmas post is normally heavy, but we can’t in living memory remember scenes where mail was stored outside like this.”

A photo taken outside the Bristol Mail Centre on Wednesday night shows scores of cage trolleys hemmed in together, piled high with parcels and bundles of magazines.

A lorry in the background bears the slogan: “Deliveries. Up to 27million homes. All in a day’s work”.

Royal Mail believes the cages pictured were taken inside during the shift.

But a union source insisted that at least some were left outside overnight, and another image showed post outdoors during the day on Thursday.

At Warrington Mail Centre on Monday rows upon row of trolleys were packed with post waiting outdoors.

Royal Mail pointed out Mondays are its busiest days.

A CWU spokesman said: “Millions of letters and packages are backlogged across the UK as the Christmas mail mounts up.

“The CWU and postal workers want to save Christmas but Royal Mail must step back from their all out assault on our members jobs, terms and the service they provide.

“Simon Thompson risks ruining Christmas for millions of people. The ball is in his court.”

Posties descended on Parliament Square today for a rally as they prepare to strike again on Sunday and on December 14, 15, 23, and 24.

The last first-class posting date for Christmas has been brought forward to December 16.

They have rejected a pay offer of seven per cent plus a £500 lump sum because they say Royal Mail, which is losing over £1 million a day, wants to cut jobs as part of the pact.

The firm argues the pay offer is being eaten away by the costs of the strike disruption.

A Royal Mail spokesman said: “We are doing all we can to deliver Christmas for our customers and minimise the impact of damaging industrial action.

“The CWU is striking at our busiest time, holding Christmas to ransom for our customers, businesses and families across the country.

“We apologise to our customers and strongly urge them to post early for Christmas.

“The pictures show busy Mail Centres with thousands of parcels moving through our network and this is typical for this time of the year.

“The sites shown are processing 30,000 parcels an hour so volume moves very quickly through the centres and on to the next stage in their journey.

“We have been doing a good job of quickly recovering from days of industrial action and have well-developed contingency plans in place to minimise delays and keep people, businesses and the country connected.

“However, we cannot fully replace the daily efforts of our frontline workforce on days the CWU are taking strike action.”