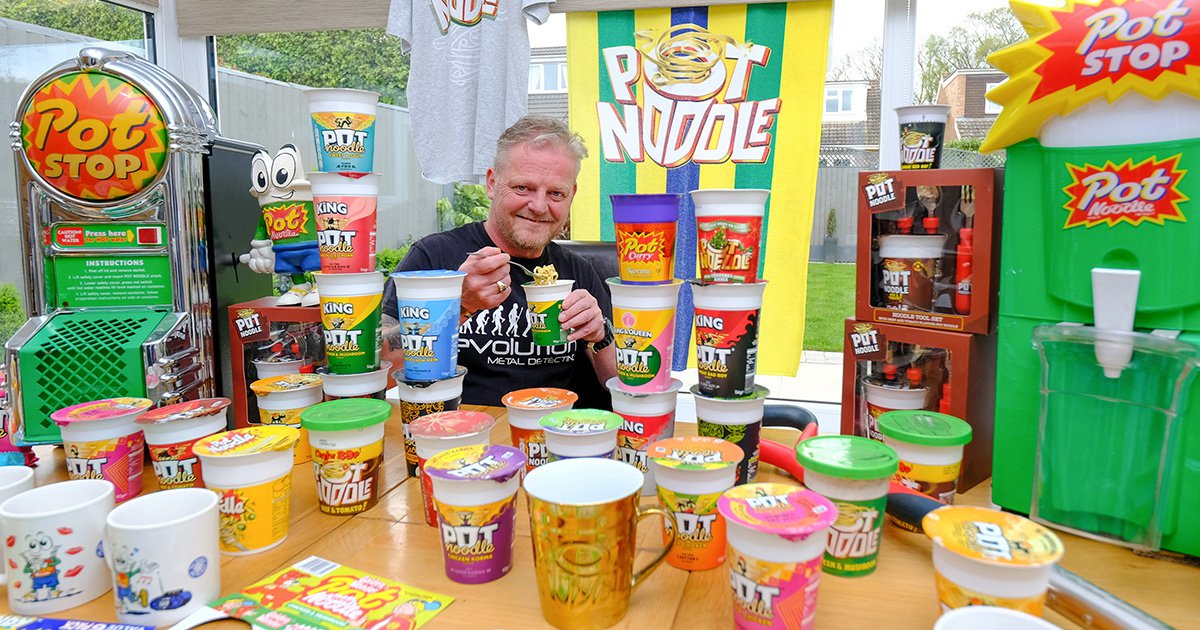 How devoted are you to your favourite food? Could you eat it every day? What about if it was 14 years out of date?

The instant snacks are an essential part of his daily routine, so much so that he’s eaten 4,000 in his lifetime.

He said: ‘I like Pot Noodles because they are a quick, easy, tasty snack. I look at the shelves at work and think “do I really eat that many?”‘

Dean has splashed out £3,000 on Pot Noodle themed memorabilia, and even owns a Chicken Korma pot signed by 90s model Caprice Bourret.

The dad-of-three’s most recent purchase was a £500 Pot Noodle vending machine.

The gadget, which plays music in the time it takes to cook a Pot Noodle, contained a 14-year-old Beef and Tomato tub.

To celebrate the rare find, Dean scoffed the out-of-date snack to raise money for charity.

Dean and two friends raised thousands as a result for six-year-old Hadley Jae Werrett who has Wiskott-Aldrich syndrome.

But scoffing the expired noodles was a fairly ‘awful’ experience for the group.

Dean said: ‘I could only imagine licking the bottom of my granny’s knicker drawer.

“It tasted of chemically old wax, worse than soap, the flavour was disgusting, we only got halfway through.

‘My friend said ‘try the juice’ as a joke, and next thing you know we were nearly throwing up everywhere.

The dad-of-three, who works as a plasterer, spends his free time scouring the internet for ‘vintage’ Pot Noodle flavours – such as the discontinued Mac and Cheese and Brazilian BBQ steak.

His most expensive Pot Noodle came in the form of a special Christmas Dinner flavoured tub, which cost £60.

All in all, Dean has more than 50 varieties in his kitchen cupboard.

He says his favourite flavour is Chicken and Mushroom, followed closely by Bombay Bad Boy.

Dean, from Worcestershire, said he started eating Pot Noodles about 30 years ago.

His passion for Pot Noodle grew when he started taking the dish out with his local metal detecting group – and he soon earned the moniker ‘Noodle King’.

The 52-year-old uses his washed out leftover pots to pour plaster at work, and limits himself to eating one Pot Noodle a day as to not ‘overdo things’.

Dean stores his Pot Noodle collection in his office at home, much to the dismay of his wife Louise.

‘She thinks I’m nuts,’ he admitted.