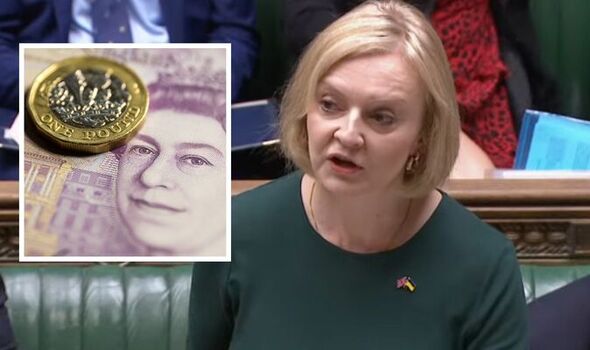 Ms Truss has capped soaring consumer power bills for two years in a package to limit the economic shock of war in Ukraine which could cost about £150billion.

With Britain facing a lengthy recession sparked by a near quadrupling of household energy bills, Ms Truss set out what she described as bold immediate action to protect consumers and businesses.

She told parliament average household bills would be held at around £2,500 a year for two years, preventing the expected 80 percent leap due in October, threatening the finances of millions of households and businesses.

Sterling, which hit a 37-year low yesterday, recovered slightly versus the dollar to hit the day’s high as Ms Truss spoke and was last up 0.2 percent on the day at $1.1554. It had been down half a percent earlier in the day.

Investors have been selling British assets heavily in recent weeks, spooked by the scale of the UK’s economic challenges and concerns over whether Ms Truss and her new team’s approach to cut taxes and raise spending is the right one.

Robert Alster, Chief Investment Officer at Close Brothers Asset Management, said: “The initial thought is one of immense relief – we knew disposable incomes were going to return to the low levels of the 1980s and there would be a fairly major recession, and this may avert it.

“It will be really interesting to see where yields end up but I think it will be worth it.”

The UK’s benchmark stock index was lifted by banking shares while commodities rose amid global recession fears and an energy standoff between Europe and Russia. This has stoked fears of tight supply worldwide.

Meanwhile, the pan-European STOXX 600 edged 0.1 percent higher with focus squarely on a rate decision by the European Central Bank.

The Government’s energy price guarantee will mean bills for the average household will go no higher than £2,500 at any point over the next two years.

It will save a typical home around £1,000 from October 1, when the current consumer price cap had been set to soar, according to official estimates.

A scheme for businesses and other non-domestic energy users, such as schools and hospitals, will be given equivalent support for six months.

Details on how this will work are so far murky and, after the initial period, the Government is eyeing cutting support to so far unnamed vulnerable industries.

The energy system works differently in Northern Ireland than the rest of the UK.

Ms Truss’s Government hopes to work with companies and the civil service in the nation to develop a similar discount.

The new help comes on top of the £400 energy bills discount in place for this winter, but the Government is not currently planning to extend that to next year.

An official spokesman for the Prime Minister has only said the cost of the support will be “tens of billions”. Previous estimates have put the strategy at around £150billion.

Chancellor Kwasi Kwarteng is expected to give more specifics during his fiscal announcement later this month.

Ms Truss has refused to impose a windfall tax on the soaring profits of oil and gas giants, as called for by Labour. Instead, her plans will be paid through borrowing.

Officials hope the measure could curb inflation by up to five percentage points, with external forecasts previously predicting it could hit up to 15 percent next year.

A moratorium which has prevented shale gas extraction due to fears it can trigger earthquakes will be lifted in England from today.

Production in consenting communities could begin in as little as six months.

A British Geological Survey report commissioned by ministers will be published imminently. Officials suggested it will show more drilling is required to establish data on the impact of extraction on earthquakes.

Downing Street was unable to provide specifics, but officials are looking at incentives, including reducing bills in areas which agree to fracking.

The move forms part of a plan to increase Britain’s energy security and reduce its vulnerability to world events.

A new energy supply task force, led by Madelaine McTernan, who headed the vaccine task force, will also negotiate with energy suppliers to agree long-term contracts that will reduce the price they charge.

Green levies on bills will be suspended temporarily for two years, with the move worth around £150 for household bills.

The cost of covering the measures they pay for will instead come from borrowing and general taxation.

Largely rural consumers with oil heaters do not benefit from a price cap. Ms Truss said a fund will be set up to give them “equivalent support”.