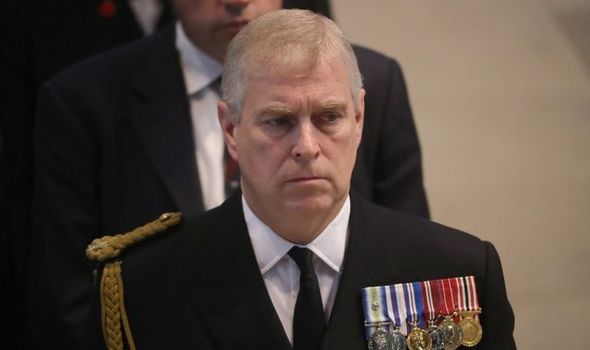 Courtiers are thought to be discussing plans that include stopping him using his title and forcing him to relinquish his charity links. Ms Giuffre alleges that Andrew sexually assaulted her three times when she was 17.

She claims she was groomed by sex trafficker Ghislaine Maxwell and her paedophile lover Jeffery Epstein – both friends of Andrew.

Ms Giuffre is suing the Prince for unspecified damages. He strenuously denies her allegations.

Andrew’s lawyers, who are being paid for by the Queen, have repeatedly failed to have the court case thrown out.

Tomorrow he faces a critical hearing when his legal team and those representing Ms Giuffre, 38, will go head-to-head at a video conference in New York to decide the future of her lawsuit.

Following Maxwell’s conviction last week, lawyer Lisa Bloom – who represented a group of the British socialite and Epstein’s victims – said Andrew, 61, should be “quaking in his boots”.

The case has prompted senior Buckingham Palace courtiers to consider plans to protect the royal household from a potentially calamitous fall-out should the Duke of York lose his case.

One source said: “If he loses, the question is, what do you do with him?

“You can’t make him resign like you would a normal person but he would be asked to put his dukedom into abeyance.”

Insiders believe it would be difficult to persuade the Queen, 95, to take away the title of Duke of York as “it was held by her father before he became King, and she bestowed it on her favourite son.

“But he has disgraced that title.” Yesterday Andrew was thought to be alone at his lodge in the grounds of Windsor Castle.

His ex-wife Sarah Ferguson, 62, and their daughters Princesses Beatrice, 33, and Eugenie, 31, and their husbands Edoardo Mapelli Mozzi and Jack Brooksbank enjoyed a break in the Swiss ski resort of Verbier.

The Duke’s brother Prince Edward and his wife Sophie were attending a church service at Sandringham with their children.

In an apparent breaking of ranks palace sources say Andrew has repeatedly acted with “impunity” as a member of the Royal Family, rejecting advice from anyone who questions him about Epstein by saying: “**** off out of my office.”

But it is understood he is prepared to acknowledge the pain of Maxwell and Epstein’s victims by making a public statement if he clears his own name.

His lawyers, however, have admitted they have no documentary evidence to prove he had a condition preventing him sweating – a claim he made in his now infamous 2019 Newsnight interview. Ms Giuffre said in an interview that same year the Prince was “sweating all over me” at a club on a night she alleges they had sex.

The Duke argues that a clause in a 2009 out-of-court settlement Ms Giuffre made with Epstein precludes him from being sued.

But her lawyers maintain the agreement has no relevance to the Royal. On Friday, US District Judge Lewis Kaplan denied Prince Andrew’s bid to halt the potentially embarrassing “discovery” process in the lawsuit against him.

It has already seen his lawyers forced to reveal there were no witnesses to corroborate his claim that he was at Pizza Express in Woking, Surrey, on one night he allegedly slept with Ms Giuffre.

Maxwell, 60, was found guilty of five charges and faces up to 65 years in jail. Ms Giuffre did not give evidence in court but her name was mentioned 250 times and her testimony about being groomed by Maxwell was used for one charge.

Epstein and Maxwell were at the Queen’s “Dance of the Decades” party in 2000 atWindsor Castle.

Andrew kept his friendship going with paedophile tycoon Epstein for a decade and was photographed chatting to him in 2010 after his release from jail. The Duke insisted he had been breaking off his friendship with Epstein during that visit. His association with Maxwell continued for another decade.

Our source said: “Andrew can deny that he was good friends with Epstein – but there’s no denying it with Maxwell. And now she’s a convicted sex trafficker.”

On claims that the Duke may lose his title, Buckingham Palace said: “This is speculation and the comments are without foundation.”