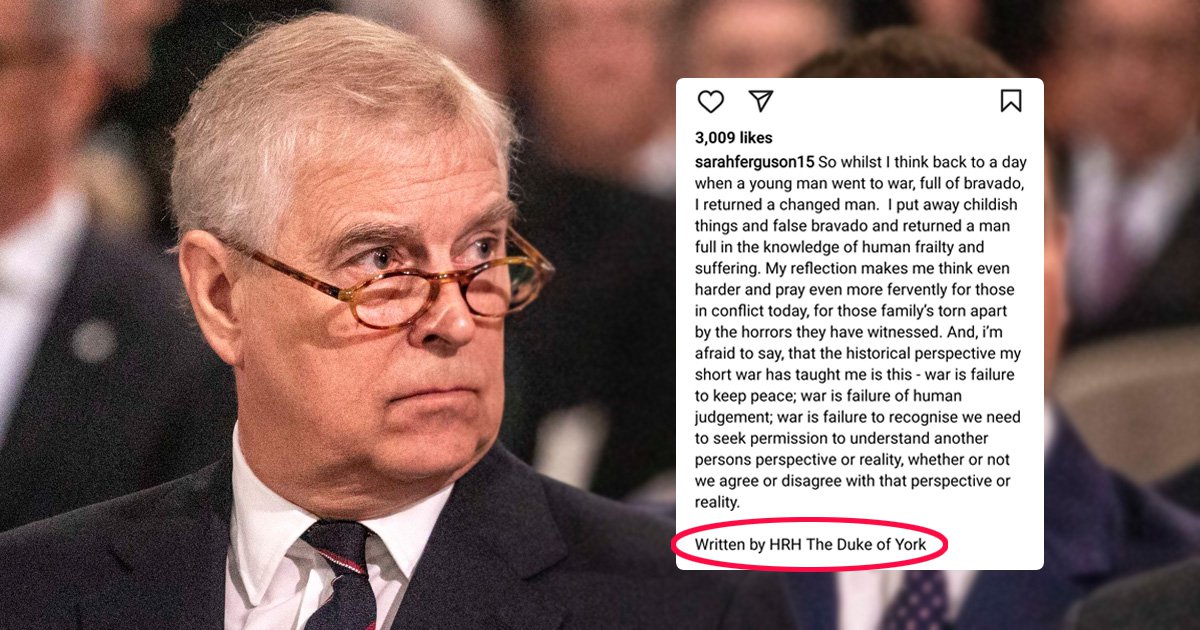 An Instagram post shared on behalf of Prince Andrew was deleted after it referred to him as ‘HRH’.

The Duke of York shared his memories of the Falklands War on his ex-wife’s account to mark the 40-year anniversary of the war – including the incident he says left him unable to sweat.

A 700-word message – a rare public utterance from the sidelined royal – was split over three posts on Sarah Ferguson’s account and was removed after about two hours.

Beneath the last post, it said it was ‘written by HRH The Duke of York’ before the ‘HRH’ was deleted.

Andrew was ordered to stop using the ‘his royal highness’ styling during the fallout from his civil sex case in the US.

The 62-year-old royal – who flew missions as a helicopter pilot during the conflict – appeared to make reference to a notorious incident which he claims left him unable to sweat.

In a 2019 Newsnight interview, he referred to the close call in a bid to counter his accuser’s account that he had been dancing and sweating profusely on the evening of an alleged assault.

Virginia Giuffre claims he sexually assaulted her when she was 17 and trafficked by convicted paedophile Jeffrey Epstein.

Andrew – who has always strenuously denied any wrongdoing – agreed a multi-million pound settlement with Ms Giuffre to end the lawsuit without going to trial.

Recounting the war, Andrew wrote: ‘So whilst I think back to a day when a young man went to war, full of bravado, I returned a changed man.

‘I put away childish things and false bravado and returned a man full in the knowledge of human frailty and suffering.’

Remembering the shooting incident, he wrote: ‘I was flying and saw a chaff shell fired from one of our ships that passed not that far in front of us.

‘For a moment it was on a steady bearing before it began to cross to our left.

‘The terror that that was going to be that, just for a moment, has had a lasting and permanent effect on me.’

The Queen stripped her son of his military honours amid public scrutiny and several months after he stepped back from frontline royal duties.

Andrew has maintained a very low profile in recent years but was seen helping his mother to her seat during a memorial service for Prince Philip this week.

Andrew and his family have been named in a High Court case involving a Turkish banker and a millionaire which has come to light in recent days.

A judge overseeing the dispute has been told that the Duke of York was allegedly paid £750,000.

The millionaire claims she was misled by the banker into believe it was for ‘assistance’ in relation to a passport application.

There is no suggestion of wrongdoing by the Duke, who has reportedly repaid the money.