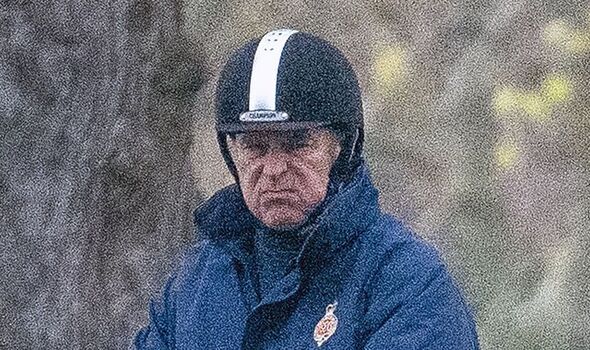 A grizzly-looking Prince Andrew was spotted out riding in Windsor Great Park today as the Royal Family still reels from more Meghan and Harry Netflix drama.

The current eighth-in-line to the throne was seen pulling some disgruntled expressions as he trotted through the majestic surroundings of the park on a chilly December morning.

The 62-year-old – who resigned from public roles in 2020 after the Jeffrey Epstein sex scandal – was wearing a black riding hat with white flash down the centre, as well as a jacket appearing to bear a royal insignia.

The Queen’s third child also wore a high-necked jumped under the jacket and black gloves perhaps to shield his hands from cold conditions set to hit the UK this week.

The Met Office issued a weather alert for snow and ice that will hit the country from Wednesday and last over the coming weekend.

Prince Andrew shared a variety of expressions during his ride and seemed animated with two companions as they enjoyed the fresh air.

It’s not clear what the trio were discussing on their morning trot but with snippets of Harry and Meghan’s multi-million-pound Netflix series being released recently it could have cropped up in conversation.

Like Harry, Andrew is no longer a working royal but what he thinks of his nephew’s burgeoning reality TV career in the US is not known.

Royal biographer Gyles Brandreth recently revealed in his new book, Elizabeth: An Intimate Portrait, that when Harry and Meghan come up in conversation much of the royal household responds with a smile and “we wish them all the best.”

Andrew may also be looking forward to enjoying Christmas with his ex-wife Sarah Ferguson who it was announced looks likely to be spending the festive period at the Royal Family’s Sandringham residence for the first time in 30 years.

The 63-year-old has not spent Christmas Eve and Christmas Day with the rest of the family at the Norfolk estate since she split from Andrew in 1992.

DON’T MISS: Tragedy as boy, 11, dies after 50ft fall down onto hotel reception in Spain