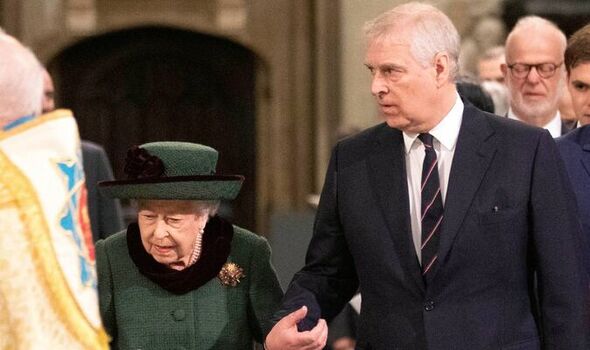 He was centre stage at the thanksgiving service for his father Prince Philip when he escorted the Queen to her seat at Westminster Abbey. And that has given the emboldened duke hope of being welcomed in from the cold and being a key player in the jubilee events, including a memorial service planned for St Paul’s Cathedral.

The surprise role was controversial but raised hopes for Andrew that he could be in line to play a key part in the June jamboree to mark his mother’s 70 years on the throne -despite objections from other members of the family including Prince Charles and PrinceWilliam.

It is just weeks since the 62-year-old Duke of York settled a civil sex abuse case for an estimated £12million.

A royal source said: “Prince Andrew does want to participate in the Platinum Jubilee celebrations and to be present at the St Paul’sCathedral service of thanksgiving and to pay tribute to the Queen’s magnificent 70 years of public service.

“The Prince and Queen do have a close bond. The Queen knows exactly what she is doing. She’s very much in charge.”

His appearance at the Abbey has given the emboldened Duke hope of being a key player in this summer’s Jubilee events, despite objections by some family members.

It is just weeks since Andrew, 62, paid an estimated £12million to end a US civil court sex assault case brought by Virginia Giuffre.

The royal source added: “Prince Andrew does want to participate in the Platinum Jubilee celebrations and to be present at the St Paul’s Cathedral service of thanksgiving, and to pay tribute to the Queen’s magnificent 70 years of public service.

“Her Majesty believes Prince Andrew is innocent. She is entirely of that view.

“The Prince was primarily present at the Duke of Edinburgh’s memorial as a mark of respect for his father and to support his mother. He was simply doing his duty.”

A packed itinerary to mark the royal milestone opens with Trooping the Colour, the Queen’s Birthday Parade, on June 2. The St Paul’s service next day is followed by a trip to one of the monarch’s favourite engagements – the Derby at Epsom.

Other key events include a Platinum Party, when some of the world’s top entertainers perform at Buckingham Palace, and the Platinum Jubilee Pageant.

It is now thought that Andrew will attend at least one of these.

He had been stripped of royal duties due to the sex claims – which the Duke has always denied – but the Queen chose her second son to accompany her from Windsor Castle to the Abbey and then to her seat on Tuesday.

The frail 95-year-old monarch, moving at a steady but slow pace, held on to Andrew’s elbow with her left hand and gripped a walking stick with her right.

It was his first public appearance since he agreed the out of court settlement over the sexual assault accusation. He denies ever meeting Ms Giuffre, 38, who as a teenager was trafficked for sex by his onetime friend, the late billionaire paedophile Jeffrey Epstein.

Andrew, like his siblings, was given a front-row seat, separated by an aisle from the Queen, Charles and his wife Camilla, plus Princess Anne and her husband Sir Tim Laurence.

Such a prominent role infuriated senior royals including Charles and William but has fuelled fears Andrew will stand shoulder to shoulder with the family at St Paul’s – and may even appear on the Buckingham Palace balcony at the climax of the bank holiday weekend.

Although the Duke of York no longer carries out royal duties and has been stripped of his patronages and military affiliations, he is not barred from attending royal family events.

The jubilee celebrations begin two months today, suggesting that Andrew – who dominated coverage of the Abbey tribute – still has time to smooth the path to a key role on his journey to rehabilitation.

Another royal source had suggested that the service would mark the Prince’s final public appearance and it was “highly unlikely” he would appear at Jubilee events.

But others disagree, with friends indicating that he feels he still has something to offer – and that this week has given him fresh impetus to return to the heart of the Royal Family.

Concern has mounted over the Queen’s health following the death of her husband in April last year at 99 and the pandemic.

She has acknowledged her mobility problems and uses a walking stick, carrying out only light duties such as virtual audiences plus the occasional in-person one at Windsor.

But her indefatigability has led commentators to suggest the sovereign is determined to enjoy a momentous Jubilee summer. The Queen marked the 70 years on February 6, the date in 1952 when she acceded to the throne, and June’s four-day extravaganza will see the nation come together to mark her lifetime of self-sacrifice and dedication to duty.

Dickie Arbiter, the Queen’s spokesman for 12 years, said: “Looking ahead to her Platinum Jubilee weekend she will not want to miss Trooping the Colour, the thanksgiving service the day after, the pageant on Sunday and most certainly not Epsom [The Derby] after not being able to go because of Covid.

“A winner has eluded her for 70 years – is this going to be her year?”

But he claimed the door was firmly shut to Andrew, saying: “Too much has gone on for Andrew to come back. I don’t believe he will be back at all.

“There is no way back. He was entitled to be at the service, it was for his dad. Not everybody will agree but the Queen made the call and she wanted her son beside her.”

Mr Arbiter added: “It was the only way he could be at the service. He didn’t slink in, he faced the music.

“I don’t agree with it, but it’s not a way back. It was just a mother’s decision to have her son escort her.”

The sight of the disgraced Prince walking alongside the Queen was said to have “dismayed and disturbed” some members of the Royal Family.

It had been expected that he would stay behind the sovereign as she walked alongside the Dean of Westminster.

A royal source, speaking about the Platinum Jubilee celebrations, told the Daily Express: “These things haven’t been decided yet. I always suspected [Andrew] would play some part but some of the Royal Family and courtiers are very much hoping he won’t.

“I think the Queen’s decision over Philip’s service may have strengthened their hand.”