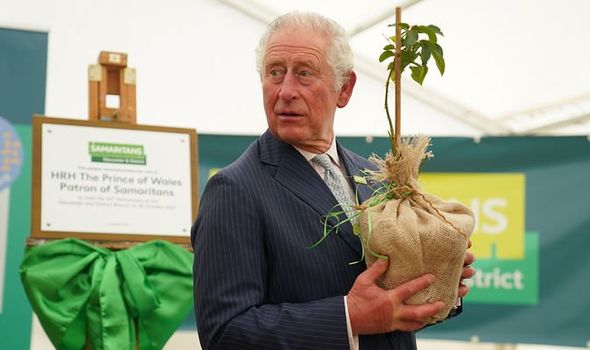 In an impassioned and historic address to the G20 forum in Rome, he will tell heads of state: “It is impossible not to hear the despairing voices of young people who see you as the stewards of the planet, holding the viability of their future in your hands.” And, in a highly significant call to action prior to the COP26 summit in Glasgow, he intends to add: “I am at last sensing a change in attitudes and the build-up of positive momentum.”

The Prince of Wales, 72, has received an unprecedented invitation to speak at the international economic forum from the president of Italy, Sergio Mattarella, in honour of his lifelong environmental work.

No royal has previously spoken to global leaders from such a prominent stage and his audience will include US President Joe Biden and, via video-link, Russian leader Vladimir Putin and China’s Xi Jinping.

According to one extract from his speech, Charles will implore them: “We must, now, translate fine words into still finer action.”

It echoes his own mother’s words two weeks ago when the Queen was overheard criticising world leaders’ inaction on the climate crisis, saying: “It’s really irritating when they talk but they don’t do.”

The 95-year-old monarch is this weekend filming a special video message at Windsor Castle to be played to COP26 delegates tomorrow following her “reluctant” decision not to attend for health reasons.

Her son’s bold G20 address today also comes a week after an exclusive Sunday Express poll revealed that a majority of people believe members of the Royal Family should be free to comment on key global issues such as climate change.

Charles will be accompanied to the G20 special session at the La Nuvola conference centre by two leading members of his Sustainable Markets Initiative (SMI) ‑ a coalition of business CEOs launched earlier this year.

And he will tell heads of state that big business is ready to help deliver solutions to the crisis.

The Prince will say: “Some 300 of the world’s top CEOs, from every sector of the economy, joined my Sustainable Markets Initiative and demonstrated how acutely sensitive they are to the way both consumers, who control more than 60 percent of GDP, and shareholders are now demanding changes in the way businesses behave.”

During his speech, Charles is scheduled to add that, while he feels “positive” after devoting half a century to environmental causes ‑ he gave his first speech on the perils of plastic at the age of 19 ‑ he believes immediate action is now crucial.

Charles will also attend the launch of a new digital tool in the fashion industry that records how an individual item of clothing was designed, manufactured and transported to shops.

Speaking ahead of the SMI Fashion Event, he declared: “People have the right to know if what they buy is created sustainably and there is a responsibility to tell them this, because we truly believe in the shared principles of transparency, accountability and enforcement.

“Fashion is one of the most polluting sectors in the world but this new Digital ID shows how business is committed to meaningful, measurable change; providing customers with the information they need to make cleaner, healthier and more sustainable choices.

“It shows business doesn’t just talk about these issues but has taken action.”

Charles was last night scheduled to attend a reception and dinner hosted by President Mattarella at Rome’s Quirinale Palace, where he will also join global leaders for a group photograph.

Tomorrow, Charles and Prince William are due to co-host a joint reception for their personal environmental projects prior to attending an evening reception with wives Camilla and Kate to mark the opening day of COP26, at which the Queen’s message will be played.

Earlier this month, Charles said: “I am very proud of my son” after William launched his annual Earthshot Prize awards in a live TV special.

Meanwhile, the Duke and Duchess of Sussex have demanded G20 leaders end the pandemic “once and for all” by working to vaccinate the world’s population.

Prince Harry and Meghan accuse wealthy nations of failing to give poorer countries access to vaccines in an open letter to heads of state in Rome that is co-signed by World Health Organisation director general Dr Tedros Adhanom Ghebreyesus.

Swedish activist Greta Thunberg, 18, arrived in Glasgow by train from London yesterday evening for COP26 and was mobbed by a huge crowd of supporters.

And ahead of the summit, the Archbishop of Canterbury has said its outcome will be “life or death for millions”.

Justin Welby, who worked in the oil industry before being ordained, said the talks are “emergency surgery” for the world and leaders must deliver for “the whole human family”.