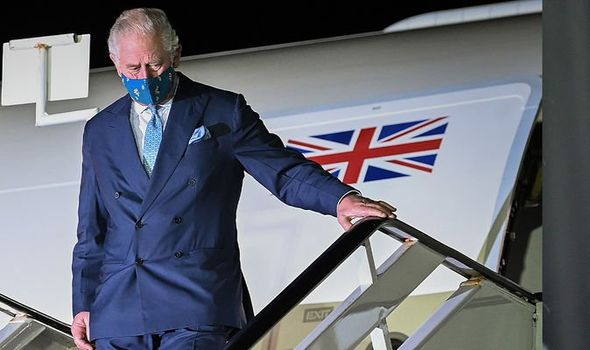 At a ceremony ending almost 400 years of the monarchy holding sway, he is set to praise the influence on the UK of migrants from Barbados and to emphasise the values both nations share. Privately, the 95-year-old monarch and Charles may admit to some sadness but the official position is that it is a matter for the new Caribbean republic.

Charles’s presence at the handover in the capital Bridgetown’s National Heroes Square has attracted some opposition. Around 100 Black Lives Matters protesters calling for Britain to pay reparations for slavery are expected to demonstrate nearby.

But other Barbadians view the severing of ties as sad. The island will stay in the Commonwealth.

The Prince, who may see more of the Queen’s 15 overseas realms abandon the monarchy, has been visiting Barbados for more than half a century and will emphasise his personal links.

Charles, 73, will tell his hosts: “As your constitutional status changes, it was important to me that I should join you to reaffirm those things which do not.

‘The between “The close and trusted partnership between Barbados and the United Kingdom as vital members of the Commonwealth; our common determination to defend the values we both cherish and to pursue the goals we share, and the myriad connections between the people of our countries – through which flow admiration and affection.”

The Prince flew to Bridgetown from RAF Mildenhall in Suffolk last night, for the midnight handover on the 55th anniversary of Barbadian independence.

The change comes as UK influence wanes while China builds up its investment in the region’s infrastructure as well as offering aid and university scholarships.

Professor Sir Hilary Beckles, historian and vice-chancellor of the University of the West Indies, said the change was the end “of colonial exploitation of the mind and body”.

The Queen’s official representative, Governor General Dame Sandra Mason, will be head of state after being elected president. She said: “This is the ultimate statement of confidence in who we are and what we are capable of achieving.”