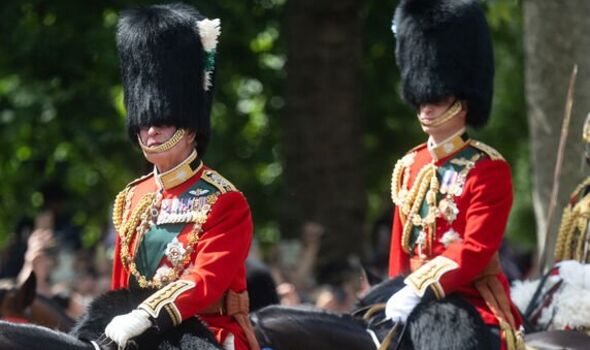 In bright summer sunshine, the son and heir, dressed in his military finery, led his fellow royal colonels, the Duke of Cambridge, 39, and Princess Anne, 71, on horseback.

Wearing the uniform of Colonel of the Welsh Guards and an array of decorations and medals, including his family ones dating from the Coronation to the new Platinum Jubilee medal, Charles, 73, fulfilled his role with pomp and solemnity.

A 7,700-strong crowd with tickets watched the Irish Guards troop their colour, or regimental flag, in time-honoured fashion while thousands more in St James’s Park strained to see the ceremony from afar and millions watched on television.

With flags from Commonwealth countries and Ukraine joining British emblems fluttering in the breeze, a ripple of cheers from The Mall announced the arrival of the troops and members of the Royal Family in the carriage procession from Buckingham Palace.

Prince George, Princess Charlotte and Prince Louis joined their mother and the Duchess of Cornwall in the first carriage, known as a barouche.

Kate, 40, was wearing a white Alexander McQueen coat dress she had worn before, with a hat by Philip Treacy.

Camilla, 74, opted for a blue ribbon-effect coat and dress by Bruce Oldfield, with a hat also by Mr Treacy.

Their carriage was followed by one carrying the Earl and Countess of Wessex and their children Lady Louise Mountbatten Windsor, 18, andViscount Severn, 14.

The Duke and Duchess of Gloucester and Princess Anne’s husband Vice Admiral Sir Tim Laurence were in the final carriage.

A larger group of royals, including Prince Harry, 37, and Meghan, 40, and the rest of the Queen’s grandchildren with their spouses, and Princess Margaret’s branch of the family, watched the spectacle from the Duke of Wellington’s former office, which looks out on to Horse Guards Parade.

More than 1,400 soldiers and 250 horses from the Household Division took part.

The Irish Guards, led by their mascot – an Irish Wolfhound called Turlough Mor known by the soldiers as Seamus – were joined by all the other Foot Guards regiments, the Household Cavalry Mounted Regiment and the King’s Troop Royal Horse Artillery.

Charles saluted as each platoon paraded by William, who is Colonel of the Irish Guards, and Anne, Colonel of the Blues and Royals, also saluted when the colours and guns went by.

One rider fell off his horse – which continued trotting around with the others – but was said to have been uninjured. A Defence official said: “Around 70 percent of the horses are inexperienced and get skittish. They’re not used to crowds this size.”

Palace sources said the Queen watched on television at Buckingham Palace before emerging on to the balcony to take the salute from the troops, returning to her official London residence after the parade.

She opted to stay at the palace because of the mobility problems that have dogged her since October.

The Queen used to take part in the parade on horseback until 1986. In 1981, a man fired six blank shots at her but she managed to control her startled horse and emerged from the scare unharmed while the man was arrested.

After yesterday’s parade and the march back to Buckingham Palace, the Queen was joined by the Duke of Kent – who is Colonel of the Scots Guards – as she took the salute. She later emerged on the balcony again with more of her family, this time to watch the flypast featuring more than 70 RAF,

Royal Navy and Army aircraft. It is understood that her wider family, including some who were not on the balcony, joined her for lunch at the palace before she returned to Windsor Castle for last night’s lighting of the beacon.