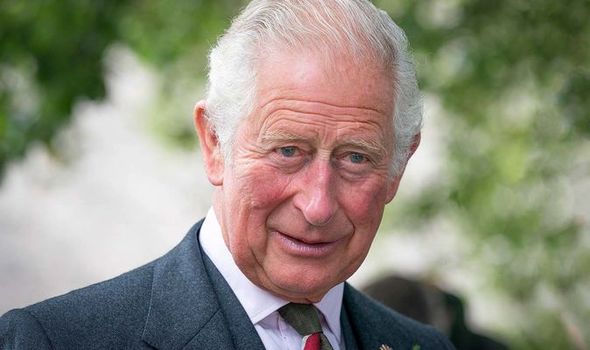 In a video link to the United Nations Cop15 biodiversity summit in the city of Kunming today, he will say world polluters must pay for environmental destruction and the true cost reflected in the price of goods. But the Daily Express understands Charles, 72, is open to an invitation to visit the emerging superpower in the next couple of years.

Today’s speech marks a British diplomatic charm offensive using the Royal Family to bring Beijing and other rapidly developing economies on side for next month’s Cop26 climate change conference in Glasgow.

China’s President Xi Jinping invited the Prince to the Kunming summit, which proved impossible. However a landmark Far East trip in the next two years has been discussed… and not entirely ruled out.

Charles’s intervention comes as the West fears Chinese goods are undercutting competitors and benefitting from an economy fuelled by coal power and other global warming causes.

In 2019 China emitted 27 per cent of the world’s greenhouse gases, more than the developed world combined.

Mr Xi, who invited Charles to Kunming in recognition of his work to combat climate change, is expected to be among world leaders in Glasgow.

The Queen, Charles, Camilla, William and Kate will be there to try to boost Britain’s efforts for world action.

Courtiers and diplomats say royal soft power can often be more influential than politicians in persuading world leaders, particularly those of authoritarian regimes, to see things the UK’s way.

It is however, still a big turnaround for Charles. In 2005 he caused uproar in China when a newspaper obtained his diary of the 1997 Hong Kong handover, in which he described its leaders as “appalling old waxworks”.And in 1999 he boycotted a state banquet for the then visiting Chinese president over the country’s occupation of Tibet.

His late father Prince Philip may also not have helped Anglo-Chinese relations. In 1986 he told a group of British students in China: “If you stay here much longer, you’d all be slitty-eyed.”

In his speech today, Charles will highlight how Chinese civilisation has had “an intimate understanding of nature”.

He will also propose three challenges for world leaders: putting nature first, adopting the “polluter pays” principle and rethinking how we use land and produce food.

Charles will say: “The pandemic the global community has been facing has shown us that human health, economic health and planetary health are fundamentally interconnected. Cop15 and Cop26, therefore, represent unmissable opportunities to accelerate action in a more sustainable direction.”

Charles, who has been campaigning on the environment for half a century, will also propose a big switch to organic farming to help the world limit the temperature rise to 1.5C by 2050.

He will say: “Transforming the forestry and land use sectors towards more sustainable practices helps to address both the climate and biodiversity crises and could contribute an estimated 30 per cent of the global mitigation needed in 2050 to deliver the 1.5C target.

“For example, regenerative agriculture, including practices such as organic and no-till farming to restore soil fertility, could enable agriculture to play a critical role in addressing climate change, revitalising rural communities and enhancing human health.

“In fact, the transition to sustainable land use can help raise the next 1.5 billion people out of poverty and represents a significant global investment opportunity.”

The Prince, who joined sons William and Harry in trying to lobby China to limit the use of endangered species in traditional medicine, will also make a familiar call to treat our planet as one.

He will say: “It is a humbling realisation that everything we need to survive – the food we eat, the water we drink, the oxygen we breathe – depends on the work of other species and the ecosystems they create.

“When we protect lands and ocean, we in fact protect ourselves – nature bounces back, bringing with her all the benefits on which life depends.”

Charles will also praise the work of his charities in China, such as his School of Traditional Arts, where students learn that “beyond the surface of things lies a natural, universal order and that they are part of that order”.

It’s up to the royal heirs to ‘bang a few heads together’, says Dickie Arbiter

WITH Cop26 – the UN’s climate conference – just weeks away the Prince of Wales has gone on the offensive. In a BBC interview he said he empathised with campaigners taking action but “blocking roads and gluing themselves to buildings wasn’t helpful”.

He said he was frustrated at world leaders’ lack of action adding, “they just talk”.

The Prince was echoing the words of his father, the Duke of Edinburgh, who began his pioneering environmental work in the 1950s before climate change was recognised as the crisis it is today.

In his no-holds-barred manner Prince Philip told the 1970 Strasbourg conference on world pollution “it’s totally useless for a lot of wellmeaning people to wring their hands and point out the dangers of pollution if no one is willing to take any action”.

Did the leaders of developed countries, particularly those in politics, commerce and industry take his warning seriously?

Obviously not as we have seen all this year with the effects of climate change – wildfires, floods and droughts in many countries across the world. Which makes it all the more important that the Queen and her two heirs in waiting, the Prince of Wales and the Duke of Cambridge, make their presence felt at the Glasgow conference.

Philip raised the damaging issues facing us as a global family if we didn’t do something about cleaning up the environment.

He wasn’t ridiculed but as the environment was unfashionable nobody really took any notice. Prince Charles took up the cause in the 1970s and for decades was rubbished and ridiculed.

Now Prince William with his Earthshot Prize is appealing to a global audience to come up with initiatives to combat climate change.

The 2021 finalists and prize winners will be announced on Sunday.

The Prince of Wales is making a speech by video to a UN conference in China today in which he’ll call on polluters to pay, a message he will no doubt reinforce at Cop26.

Given the conference is in the UK it makes perfect sense to wheel out our secret weapon, or in this case weapons, and the Government will want to take full advantage of the royal presence in Glasgow.

No doubt the Queen will use all her diplomatic skills when she meets world leaders while it will be up to Charles and William to network the conference, bang a few heads together and urge leaders to stop posturing. Time is not on their side.