Prince William told those waiting in line to see the Queen lying in state that his children were doing “ok” since the death of their great-grandmother the Queen on September 8. Members of the public have been asking the Prince how Prince George, nine, Princess Charlotte, seven, and Prince Louis, had been coping since Her Majesty passed away. William told how they were “doing ok” and have been given support at school.

In recent days, Prince William and Kate Middleton have spoken about how their children are handing the news that their great-grandmother has passed away.

The children have recently started at Lambrook School in Berkshire after moving to Windsor at the end of summer.

The Prince and Princess of Wales revealed they are “trying to keep everything constant” for their three children since the death of their beloved “Gan Gan”.

Prince William told fans at Sandringham yesterday that he had hoped his grandmother “might get a bit more” time. 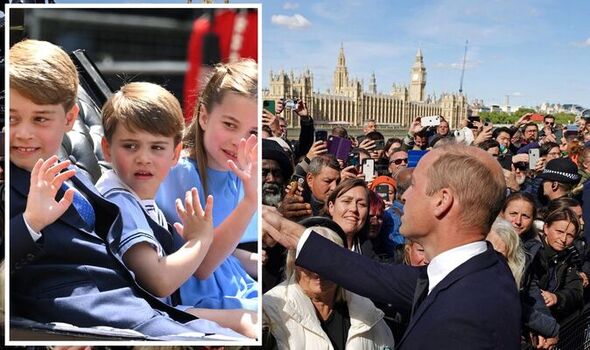 The Prince has been making several public appearances since the death of the Queen on September 8, as he now takes on more duties for his father King Charles.

He visited the Sandringham Estate yesterday where the Queen would regularly spend Christmas.

Mourners had come to pay their respects, with floral tributes and cards and letters left at the gate.

Today, William stepped out alongside King Charles to thank those waiting in line to see the Queen lying in state at Westminster Hall in London.

George, Louis and Charlotte are reportedly being well looked after in school, with Kate telling members of the public that the children are “settling in”.

Prince William added that the children were “doing ok” as concerned fans of the royal couple asked how they were doing.

He told well-wisher Karen Anvil: “We’re trying to keep everything constant and settled for them.”

He also admitted there was a lot of talk of the Queen’s death amongst pupils at the school.

The Prince of Wales added how lovely it was that his children were able to have a relationship with their great grandmother like he did.

He said: “I remember my great-grandmother, you see. She lived until 101. We thought my grandmother might get a bit more…”

Kate told well-wishers in Sandringham: “They’re in school and they’re being well looked after. They’re in a routine and they’re happy.”

She added that the princes and princess had made “new friends”.