The Duke and Duchess of Cambridge’s children met one of their heroes when Sir David came around bearing a gift for the young Royal – and it had nothing to do with his auntie Meghan. Seven-year-old George was thrilled when the veteran television naturalist turned up at Kensington Palace with the tooth from a dinosaur, a giant shark called carcharocles megalodon.

Sir David, went to the palace on Thursday to join the Duke of Cambridge at a private outdoor screening in the garden of his new feature film, David Attenborough: A Life On Our Planet.

He found the tooth on a family holiday to Malta in the late 1960s, embedded in the island’s soft yellow limestone. Carcharocles, which ruled the oceans, lived between 23 million and five million years ago and is believed to have grown to 15 metres, about twice the length of the Great White, the largest shark alive today.

The prehistoric shark was the subject of a 2018 movie called The Meg.

George, who has watched many of Sir David’s documentaries and has a keen interest in the natural world, was impressed. “He was fascinated,” a royal source said.

It was a thrill also for George’s siblings, Princess Charlotte, five, and two-year-old Prince Louis to meet Sir David, who at 94 is only 17 days younger than their great-grandmother the Queen. “The children really enjoyed meeting Sir David. They are big fans of his programmes,” the source said. 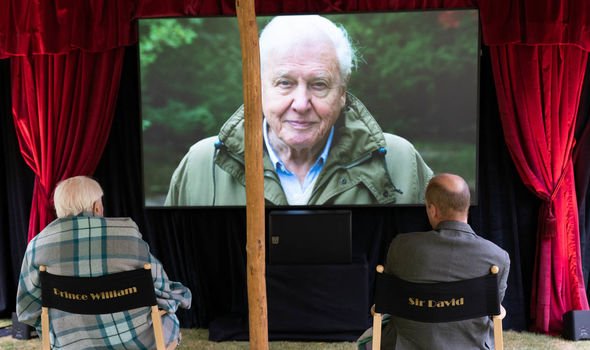 Their mother has previously revealed how much they like his documentaries, would be jealous that she had met him, and enjoy going on family trips to the Natural History Museum in London.

In April Kate, 38, also told schoolchildren from Casterton Primary School in Burnley, Lancashire, on a video call that Sir David was probably her favourite celebrity.

His new film is his most personal project to date, his witness statement and legacy after a lifetime of observing the planet and the devastating changes that climate change has brought.

In it he argues it is not too late to halt the worst effects of climate change but he also suggests that the Earth will survive even if mankind is no longer around to see it.

Prince William has become enthralled by him after spending the past couple of years coming to the conclusion that he wants to take a leading role as a global champion in the fight to combat the worst effects of the Earth’s warming. 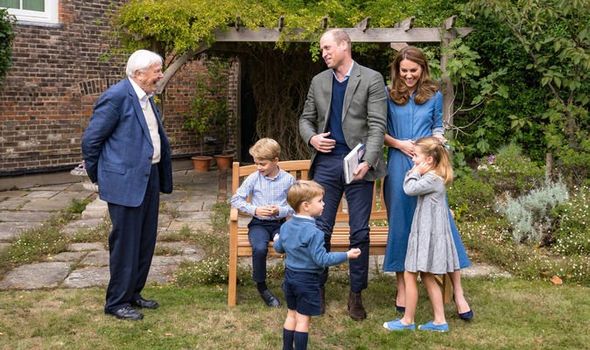 The pair swapped chairs as they sat watching the film on a chilly day in the palace garden. “The Duke thought the film was one of Sir David’s best yet,” the source who was there said. “It was a lovely occasion.”

At the end of last year William announced he was spearheading the most prestigious environmental prize in history, the Earthshot Prize, to try to encourage innovation to tackle climate change and create “a decade of action to repair the Earth”.

He has also taken part in an ITV documentary about his personal journey, Prince William: A Planet for Us All, which is due to be screened on October 5, In a preview clip, he said: “I have always loved nature and fatherhood has given me a new sense of purpose.

William, 38, added: “Now I have got George, Charlotte and now Louis in my life – your outlook does change. You want to hand over to the next generation, the wildlife in a much better condition.”