Prince Harry and Oprah’s much-anticipated TV show focused on mental health is due to be released on May 21, it has been announced. The series, to be broadcasted on Apple TV+, will see the pair in conversation with several guests, guiding an “honest discussions about mental health and emotional wellbeing”.

But it is also set to feature highly personal moments for the Duke of Sussex as, according to details released, it will see Oprah and Harry discuss “their own mental health journeys and struggles”.

The show, titled ‘The Me You Can’t See’, will feature 14 experts and organisations to “shed light on different pathways to treatment”.

Among the guests confirmed set to speak about their experiences there are actress Glenn Close and singer Lady Gaga.

NBA players DeMar DeRozan and Langston Galloway will also sit down to speak with Oprah and Harry. 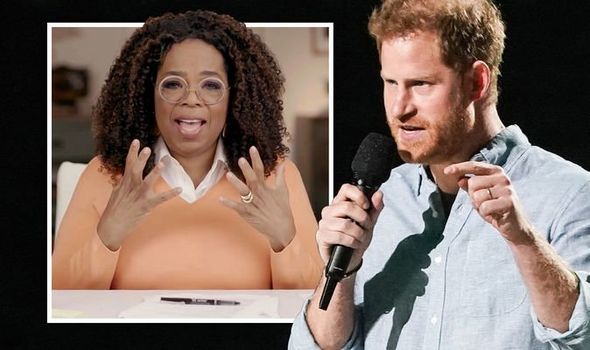 Ahead of the series’ debut, Prince Harry said: “We are born into different lives, brought up in different environments, and as a result are exposed to different experiences.

“The majority of us carry some form of unresolved trauma, loss, or grief, which feels – and is – very personal.

“Yet the last year has shown us that we are all in this together and my hope is that this series will show there is power in vulnerability, connection in empathy and strength in honesty.”

Oprah also said in a statement: “Now more than ever, there is an immediate need to replace the shame surrounding mental health with wisdom, compassion, and honesty.

“Our series aims to spark that global conversation.”

Prince Harry’s show focused on mental health was first announced in April 2019, when the Duke of Sussex’s communications office at the time, Kensington Palace, said Harry had teamed up with Oprah to create a documentary series.

The show was due to premiere in April 2020 but, due to the coronavirus pandemic, its release was delayed.

In late April, Oprah had already let slip the show she co-created with the royal would debut within weeks.

Appearing on the Drew Barrymore Show on CBS alongside with psychiatrist Dr Bruce D. Perry, Oprah said: “I wanna just say that Dr Perry and I have been also, for the past two years, along with Prince Harry and Apple, we’ve been working on this mental health series that’s coming out in May on Apple.”