The Duke and Duchess of Sussex dramatically stepped down as senior royals in March last year to seek financial independence. As part of their deal, they agreed to have a 12-month review the Palace, which is due on March 31. Harry had planned to request a ­face-to-face meeting with the Queen after he and wife Meghan left their roles as senior working royals. However, a ban on non-essential travel as part of England’s third lockdown, which started yesterday, means the couple will not be able to travel from their new home in California, in the US.

Royal sources have said Harry has “not yet attempted to contact” the Queen to arrange a meeting of his 12-month royal review.

But he is reportedly expected to arrange a solution in the coming weeks.

Meghan and Harry have caused a stiry among royal watchers recently after signing multi-million pound deals with Spotify and Netflix.

Royal commentators discussed the impact of these deals ahead of the review on Megxit arrangements. 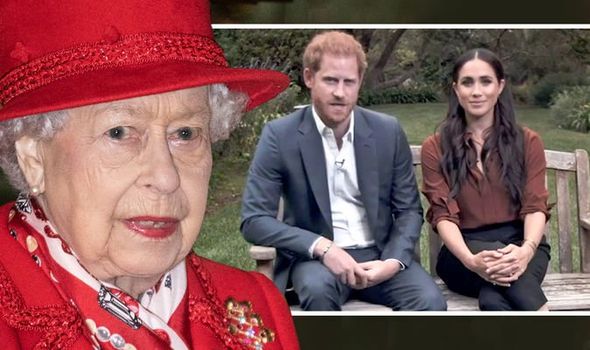 Royal biographer Penny Junor said Harry and Meghan’s downfall in their new commercial ventures may have been rushed through as they no longer benefit from “gold standard” advisers at Buckingham Palace.

She added they would have checked their plans for pitfalls.

Ms Junor added the couple’s other multimillion-pound deal with Netflix was already controversial because the firm produced The Crown, with the latest season four straying away from facts while exploring the troubled life of Harry’s late mother Diana, Princess of Wales.