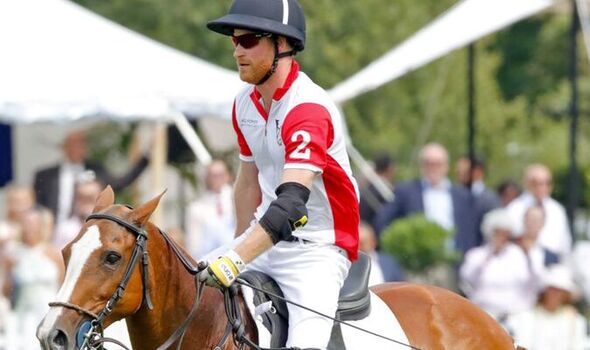 Last week, the Duke of Sussex played in a polo match with his close friend Nacho Figueras, while Meghan Markle watched on. The game was played at Santa Barbara Polo and Racquet Club for the annual Harry East Memorial Tournament in Montecito, where the Sussexes reside.

On Wednesday, it was announced that the Duke of Sussex will continue to play polo alongside his Los Padres teammates until mid-June.

The move has sparked controversy though as the Cheval Athletics USPA Intra-Circuit starts the same weekend as the Queen’s Platinum Jubilee events.

Royal blogger Gert’s Royals points out the timing appears to show that Harry won’t be returning to the UK to join his family on Buckingham Palace’s balcony.

In a tweet, she wrote: “The Cheval Athletics USPA Intra-Circuit starts the same weekend as the Queen’s Platinum Jubilee Events, so I guess the Sussexes have made up their mind about attending that.”

Trooping the Colour, also known as the Queen’s birthday parade, sees over 1,400 parading soldiers, 200 horses and 400 musicians coming together.

The event sees the parade begin at the Palace before moving down The Mall towards Horse Guard’s Parade, where they will be joined by members of the Royal Family on horseback and in carriages.

The event will conclude with a traditional RAF fly-past, watched by the Queen and members of the Royal Family from the Buckingham Palace balcony.

The event occurs on June 2, just one day prior to Harry’s last polo leg commencing in Montecito.

In response to the news, royal fans speculated that the Duke’s calendar would be “booked and busy” so slotting in a trip to the UK may pose tricky.

One with the screen name ‘Prince Alex’ wrote: “Goodbye jubly. #PrinceHarry is booked and busy!”

While another called Jacklyn Gibson added: “Now we know the Harry will not be on the balcony.”

Prince Harry and his three teammates won their first tournament 17-10.

Nacho Figueras, a long term friend of the Duke’s, said he was very pleased with the results of the game.

He told CLICKPOLO: “I think we had a good game and we improved from our previous match where we still didn’t know each other and we were a little bit anxious.”

The team will be playing the Folded Hills Pope Challenge from May 6 to May 15.

They will then take part in the Lisle Nixon Cup from May 20 to May 29.