Prince Harry, 36, served in the British armed forces for more than a decade and is extremely proud of his military past. Much of his work as a senior royal focussed on helping veterans including his most high-profile project the Invictus Games. Part of the royal exit agreement Harry and Meghan Markle reached with the Queen stipulated that the Duke must relinquish his honorary titles, a move which is understood to have deeply upset him.

Prince Harry and Meghan are about to mark their first Christmas since quitting the Firm.

The couple are now based in Montecito, California where they live in a multimillion-pound mansion with their one-year-old son Archie Harrison.

While Harry has continued to honour his military ties in the wake of his royal stepdown, a poignant Christmas message from his father Prince Charles may have evoked strong feelings for the Duke.

On Tuesday, heir apparent Prince Charles, 72, issued a heartfelt video message to servicemen thanking them for their efforts over the past year. 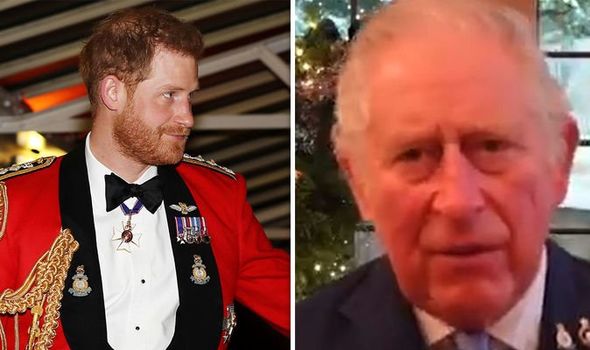 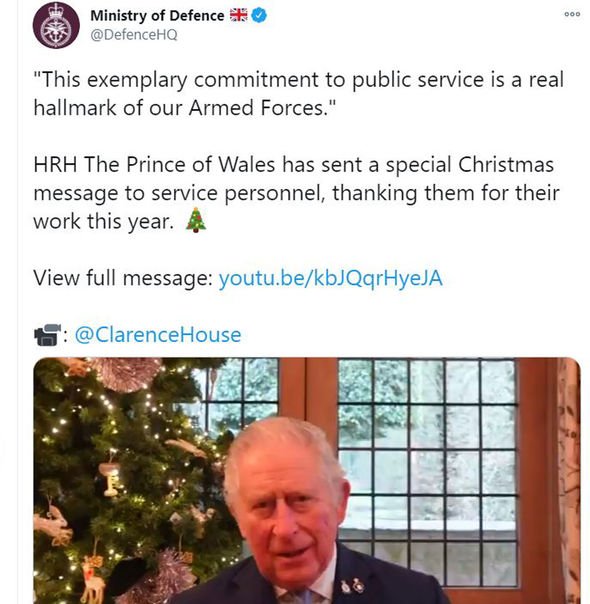 The clip was shared by the Ministery of Defence on Twitter with the message: “‘This exemplary commitment to public service is a real hallmark of our Armed Forces.'”

“HRH The Prince of Wales has sent a special Christmas message to service personnel, thanking them for their work this year.”

In the heartfelt video Prince Charles said: “Despite all the trial and tribulations faced in the UK this year, I’m only too aware that you’ve also managed to continue your routine business through the execution of essential training, operational deployments, and safeguarding the integrity of critical elements of our defence at home and overseas.

“Activity which all too often goes unnoticed but it absolutely vital to our national security and has, I realise, been especially challenging this year.” 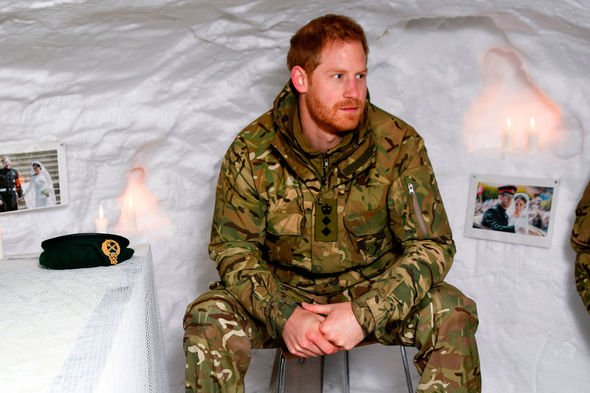 Charles added: “In doing all this, I am conscious of the fact that is has, in many cases, meant longer spells of being separated from your families and extended period of isolation and deployment.

“As many of us look forward to meeting with our families on Christmas Day, albeit in a very limited way, a large number of you will find yourselves unable to be with loved-ones at this most special time.

“This exemplary commitment to public service is a real hallmark on our Armed Forces and provides a distinct sense of reassurance to our nation, which is greatly appreciated, I can assure you.

“Just as we commemorated the WW2 generation on the 75th anniversary of VE Day and VJ Day earlier this year, more than ever this country retains a deep sense of pride and thankfulness for our Armed Forces of today.”

The future king concluded: “To you and your families, wherever you may be, I can only wish you all a very Happy Christmas and a safe and healthy New Year.”

The message is likely to have struck a chord with Prince Harry who may have wished to honour the forces in a similar manner.

However, since moving away from the royal bubble, Harry is no longer able to deliver official messages on behalf of the Royal Family.

While Meghan and Harry were expected to return to Britain for a visit over the summer, the couple have been stuck Stateside due to the pandemic.

In November, Harry was unable to attend the Royal Family’s official Remembrance Day commemorations in Whitehall where he has laid a wreath in previous years.

In the wake of a Megxit deal being reached with the Queen last January, Harry alluded to his disappointment at having to let go of his ceremonial military roles.

Speaking at a charity dinner, he said: “What I want to make clear is we’re not walking away, and we certainly aren’t walking away from you.

“Our hope was to continue serving the Queen, the commonwealth, and my military associations, but without public funding. Unfortunately, that wasn’t possible.”

He added: “I’ve accepted this, knowing that it doesn’t change who I am or how committed I am.

“But I hope that helps you understand what it had to come to, that I would step my family back from all I have ever known, to take a step forward into what I hope can be a more peaceful life.” 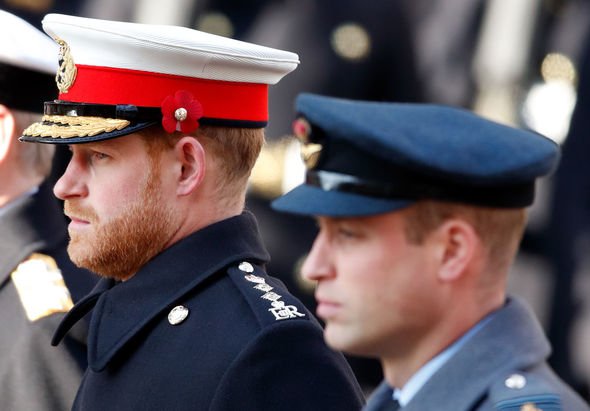 Will Harry’s military titles be reinstated?

The included Captain-General of the Royal Marines as passed down to him by his grandfather Prince Philip, 99.

Whether or not Harry will get to keep these titles long term will be decided by the Queen when she reviews the Megxit agreement in March.