The Duke of Sussex flew to the UK from his new home in California two days after his grandfather peacefully died at the age of 99. Harry has originally planned to return to the UK in July for the unveiling of a statue for his late mother, Princess Diana, on what would have been her 60th birthday. However, the Duke has returned earlier than initially planned to attend his grandfather’s funeral on Saturday and has now appeared to make the most of his trip by visiting the newest addition to the Royal Family.

A source told Us Weekly: “Prince Harry has met Princess Eugenie’s newborn son, August, upon his return to the UK for their grandfather Prince Philip’s funeral.”

Harry returned to the UK along as his wife Meghan Markle was unable to “receive medical clearance from her physician” to travel because she’s nearing the end of her pregnancy.

This will be the first time Harry has been back in his home country and seen his family since his bombshell interview with Oprah was aired.

The couple claimed to the talk show host that Meghan experienced racism from the British press and was not supported by The Firm after she experienced suicidal thoughts in 2019. 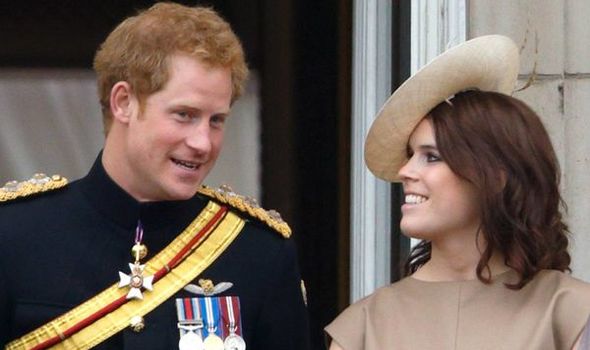 The royals have denied their claims but, the funeral is could also bring temporary peace to the family.

Royal author Ingrid Seward said: “For the period that Harry is [in England], they will very much put their differences behind them.

“I think that Harry will want to get back to Meghan as soon as the funeral is over … so he won’t have a great deal of time to be in a potentially embarrassing situation with his family.”

Harry may be please to see a friendly face within the Firm as he has always been particularly close to Eugenie.

She gave birth to her son while Philip was in hospital recovering from heart surgery in February and so it believed the Duke never met his youngest great-grandchild.

Authors Omid Scobie and Carolyn Durand said in their book Finding Freedom that Harry and Eugenie have a “natural connection”.

They wrote: “Out of all the Queen’s grand-children, Harry and Eugenie have one of the most natural connections.

“Like Harry, Eugenie is loyal, honest and great fun. The two had many nights out together in London.”

DON’T MISS
Queen should NOT be forced to sit on her own at Philip’s funeral [POLL]
ITV Prince Philip funeral: How to watch Tom Brady lead ITV coverage [VIDEO]
‘Without Meghan by his side’ ITV host weighs in Harry and William row [INSIGHT]

Eugenie’s close bond with her cousin could have also helped build a friendship with Meghan as well as they are reported to have “stayed friends and remains friends” despite being opposite ends of the Atlantic.

Both Harry and Eugenie have paid touching tribute to their grandfather this week.

Harry said: “My grandfather was a man of service, honour and great humour. He was authentically himself, with a seriously sharp wit, and could hold the attention of any room due to his charm – and also because you never knew what he might say next.

Princess Eugenie also paid a heartfelt tribute to her “dearest Grandpa” the Duke of Edinburgh, pledging to look after “Granny” the Queen for him.

She added: “I remember your hands and your laugh and your favourite beer.

“Thank you for your dedication and love for us all and especially Granny, who we will look after for you.”