Prince Harry ‘due to leave in next 24 hours’ says insider

Daily Mirror Royal Editor Russell Myers revealed family members have set up a rota to visit the Queen ahead of her 95th birthday on April 21. But Mr Myers explained Prince Harry would be jetting back to the US to be with his pregnant wife Meghan – confirming reports he was “desperate” to return to her. It comes as the Duke of Sussex returned to the UK following the death of his grandfather Prince Philip but reportedly faced a “frosty” reception from senior royals.

Appearing on ITV’s Lorraine, Mr Myers discussed the Queen’s upcoming birthday and how other family members were “rallying around” the monarch so she would not be alone grieving.

Host Lorraine asked whether the royal editor believed Harry would stay for the celebrations.

“It is a shame but he is due to see the Queen before he goes.

“The royals have organised an unofficial rota system so the Queen will not be alone on her birthday – we can guarantee that.

“I think it is very important. as a lot of families have had to do, to try to have a period of togetherness whether it is on socially distant walks or through Zoom calls.” 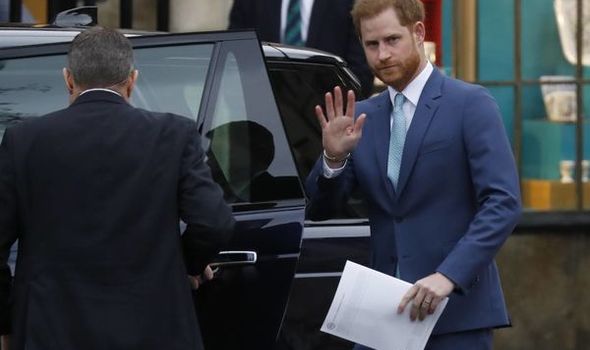