Prince Harry, 35, and Meghan Markle, 39, delighted crowds of royal fans who gathered to watch them leave St George’s Chapel Windsor in a horse-drawn carriage following their royal wedding ceremony on May 19, 2018.

As the beaming couple waved to fans, there is one small detail they will have missed, according to new book Finding Freedom by Omid Scobie and Carolyn Durand.

The authors claim Prince Harry had a slight wardrobe malfunction which he only revealed to Meghan following the ceremony.

They write: “After the ceremony, the newly-wedded couple paused at the top of the chapel steps just after 1pm to, at long last, engage in the time-honoured tradition of sharing their first kiss as husband and wife.

“Then, with the voices of the Kingdom Choir singing ‘This Little Light of Mine’ ringing out from inside the church, they climbed into their horse-drawn carriage for a twenty-five-minute celebratory ride through the streets of Windsor.” 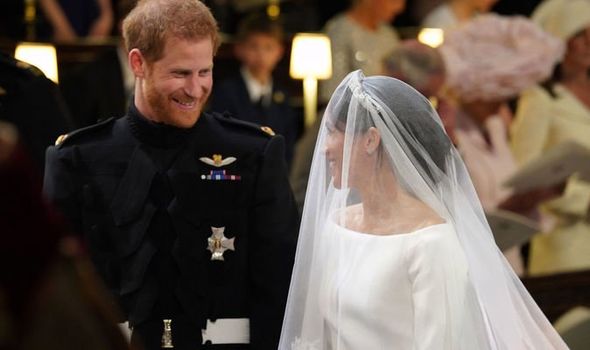 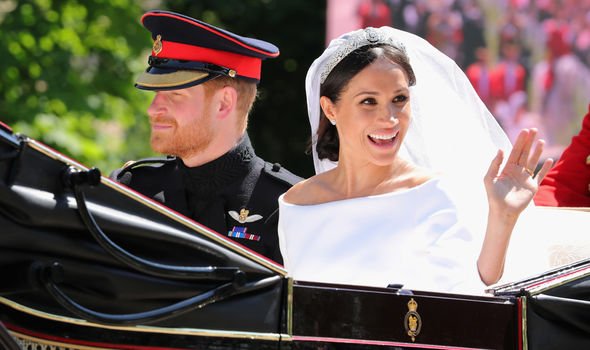 “Lifting her hand to her chest, Meghan had just one word when she saw the huge crowds gathered on the grounds of the castle: ‘Wow!’

According to the authors, Harry had a more humorous response to the carriage ride.

They write: “Sitting down in the carriage beside his bride, Harry laughed that his trousers were ‘too tight.’

“And just like that, the wedding of the year, or at least the portion they were willing to put on display for the world, had come to an end, the couple literally riding off into their happily ever after as they alternatively waved to the cheering fans and stared at each other, marvelling at the momentous step they had just taken.” 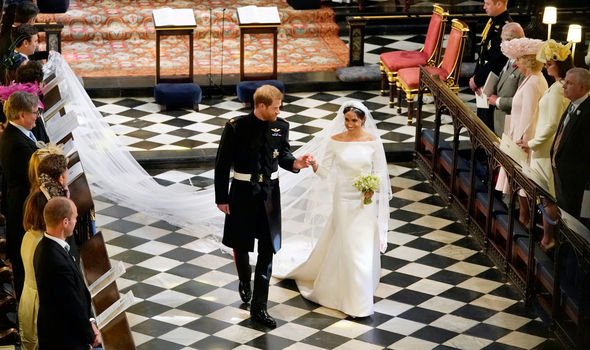 While the book depicts the fairytale aspects of Harry and Meghan’s big day, it also touches on some of the difficult elements too.

According to the authors, some of Harry’s old friends felt the star-studded private wedding reception indicated how the Prince had ‘changed’ since meeting Meghan.

One of Harry’s old Eton pals Skippy was not invited to the evening party and reportedly voiced his damning verdict on the event to friends at brunch the following day.

Mr Scobie and Ms Durand write: “Notably absent were Skippy, Harry’s old friend, who had questioned the prince’s relationship with Meghan, and his wife Lara.”

Meghan Markle ‘fish out of water’ as Harry ‘takes lead’ at outing [PICTURES]
Kate Middleton could face fine if George and Charlotte miss school [INSIGHT]
Baby Archie update: Archie expected back in the UK on THIS date [VIDEO]

The book continues: “They were invited to the wedding ceremony and lunchtime reception but didn’t make the cut for the evening bash.”

The authors claim Skippy took a dim view of Harry and Meghan’s Hollywood set of friends.

They write: “At a brunch the day after the wedding, Skippy told friends ‘Meghan has changed Harry too much.’

“His Eton pal said the prince was awed by the likes of the Clooneys and Oprah.

“Many of Harry’s old friends said that the evening guest list was the prince and his bride’s way of saying ‘These are the people we want in our lives moving forward.'” 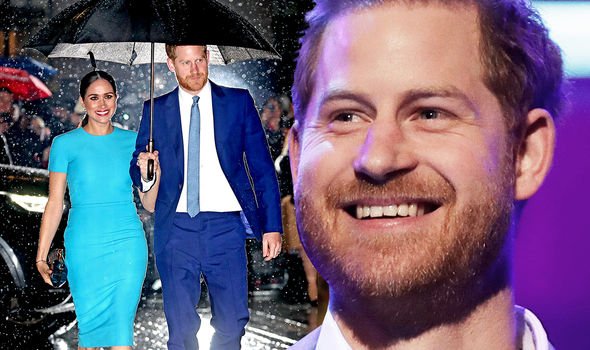 Meghan and Harry moved to the USA with their son Archie Harrison following their royal step down in March.

They were based in actor Tyler Perry’s Beverly Hills mansion during lockdown before moving from Los Angeles to Santa Barbara in July.

Now based in the upscale neighbourhood of Montecito, they live close to one of their celebrity pals and former wedding guest – Oprah Winfrey.

In recent weeks Meghan and Harry have made the two-hour drive from Montecito to LA to carry out charity work in Meghan’s hometown.