Prince Louis turns two today, and his birthday has been publicly marked by his doting parents Kate and Prince William with pictures taken by the Duchess of Cambridge. Four snaps, taken at Anmer Hall earlier this month, were shared yesterday evening, ahead of the little Cambridge’s big day.

The caption makes fun of a popular internet joke, and explains the first never before seen snap, showing Prince Louis with his hands drenched in colourful paint open wide in front of the camera, represents one of the traditional, artistry pictures usually published on Instagram.

The second one, showing little Louis rubbing the paint on his cheeks, represents the reality behind the scenes. 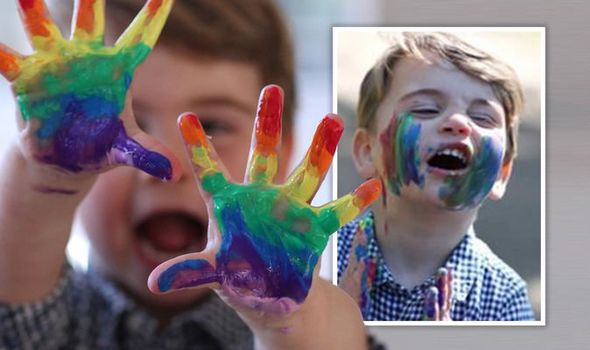 The caption added: “Thank you for your lovely messages on Prince Louis’s second birthday.

“We are very pleased to share today, on Prince Louis second birthday, new photographs taken by The Duchess this April.”