On Instagram, the Cambridges changed their handle from @KensingtonRoyal to @DukeandDuchessOfCambridge today. The Instagram account handle referred to their London residence Kensington Palace, which they once shared with the Duke of Duchess of Sussex who lived at Nottingham Cottage.

The move comes after the Duke and Duchess of Sussex undertook a two-hour bombshell interview revealing their difficult experiences in the British Monarchy after Prince Harry married Meghan Markle in May 2018.

During the interview, Meghan and Harry also laid bare their brief lives as a working royal couple, alleging that a member of the family – not the Queen or Duke of Edinburgh – made a racist comment about their unborn son.

Patrick Harvie MSP, co-leader of the Scottish Greens said “serious questions” had been raised “about the attitudes and values of the Royal Family” following the Duke and Duchess of Sussex’s interview with Oprah Winfrey.

He said today that the majority of Scottish voters wanted reforms of who should be head of state following stressing the monarchy would “hold back” an independent Scotland. 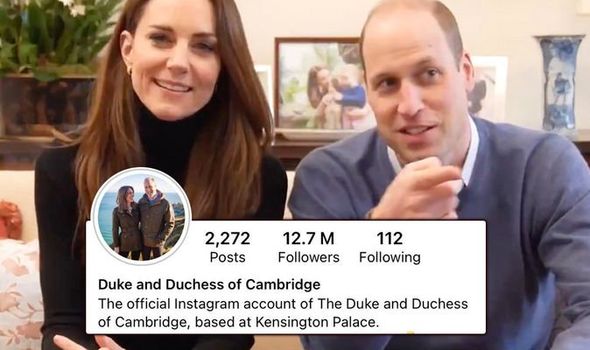 Duke and Duchess of Sussex also said they would not “continue with the responsibilities and duties that come with a life of public service” in February.

A statement from the palace earlier this year added Prince Harry and Meghan “remain much-loved members of the family”.

But hitting back in a statement, the couple warned “service is universal” and offered to continue supporting the organisations they have represented.

Prince Harry and Meghan Markle said they would step back as “senior” royals and work to become financially independent.

The couple formally stepped down in March 2020 with a plan to review the arrangements after 12 months.

As a result of the move, the couple returned their honorary military appointments and royal patronages, which are currently being redistributed to working members of the Royal Family.

A statement from Buckingham Palace at the time said: “The Queen has written confirming that in stepping away from the work of the Royal Family it is not possible to continue with the responsibilities and duties that come with a life of public service.

“While all are saddened by their decision, the Duke and Duchess remain much-loved members of the family.”

A spokesman for Harry and Meghan, added: “As evidenced by their work over the past year, the Duke and Duchess of Sussex remain committed to their duty and service to the UK and around the world, and have offered their continued support to the organisations they have represented regardless of official role.”

They added: “We can all live a life of service. Service is universal.”