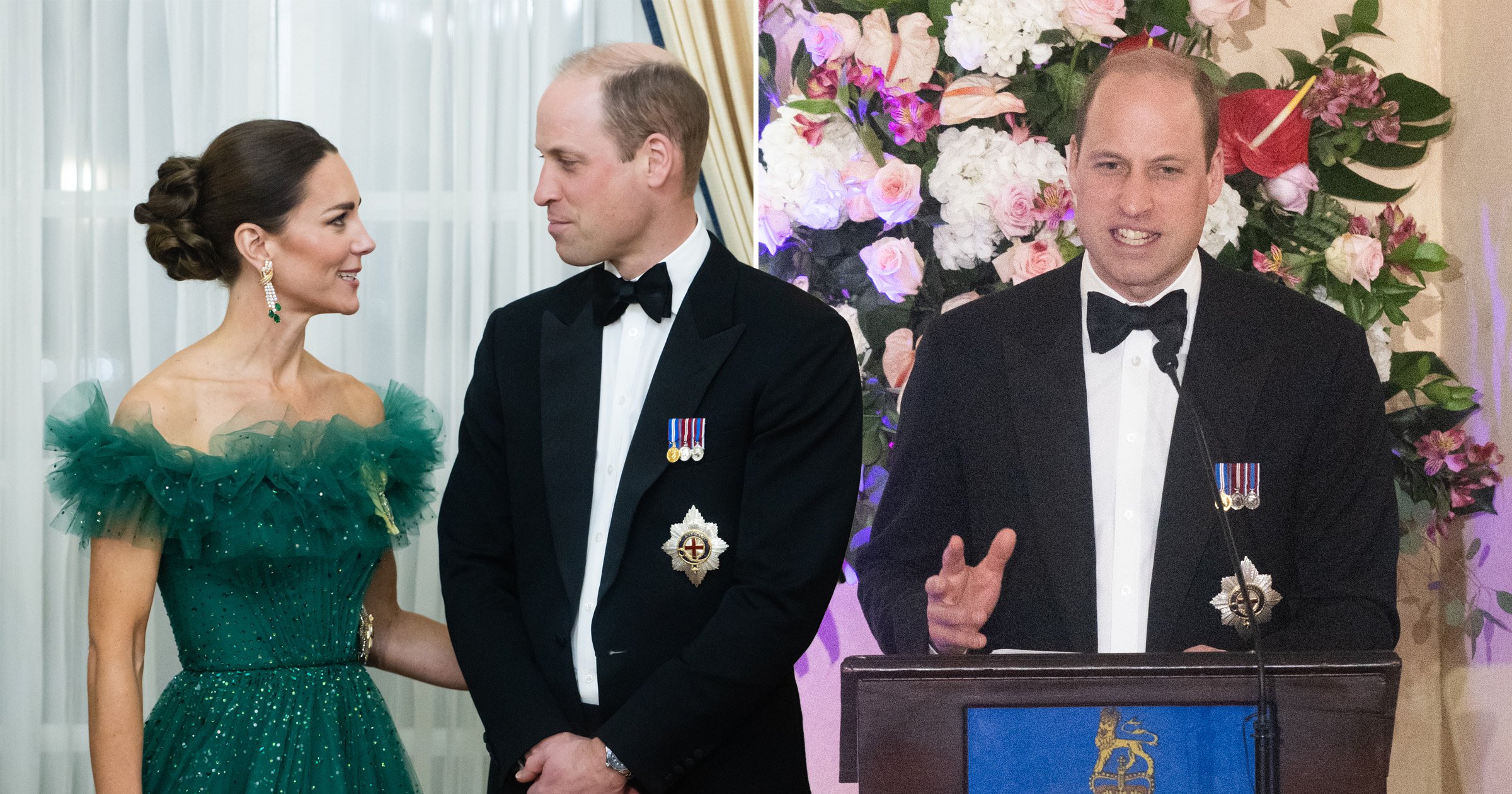 Prince William has described the slave trade as ‘abhorrent’ – but did not directly apologise for the Royal Family’s role in it.

The Duke and Duchess of Cambridge were met with protests upon their arrival in Jamaica, which has ‘already started’ the process of removing the Queen as head of state.

Members of the country’s Rastafarian community accused the royals of benefiting from ‘blood, tears and sweat’ of Jamaican people.

In his speech at a lavish dinner on the fifth day of their Caribbean tour, William said he felt his ‘profound sorrow’ at the forced transportation of millions of people from Africa to the Caribbean and North America – a trade British monarchs either supported or profited from during the 17th and 18th centuries.

He echoed previous speeches by his father Prince William, describing the slave trade as an ‘appalling atrocity’ that ‘stains our history’.

However, critics have noted how the future king did directly apologise, just as his father Charles had not during a recent trip to Barbados.

William used his speech to praise the Windrush generation of Caribbeans, who arrived in the UK a few years after the Second World War to help rebuild the nation depleted by six years of conflict.

He said: ‘I strongly agree with my father, the Prince of Wales, who said in Barbados last year that the appalling atrocity of slavery forever stains our history.

‘I want to express my profound sorrow. Slavery was abhorrent. And it should never have happened.’

‘While the pain runs deep, Jamaica continues to forge its future with determination, courage and fortitude.

‘The strength and shared sense of purpose of the Jamaican people, represented in your flag and motto, celebrate an invincible spirit.

What was the Royal Family’s role in slavery?

Elizabeth I was involved with one of Britain’s first slave traders, John Hawkins.

Charles II encouraged the expansion of the industry and with his brother the Duke of York, later James II, invested their private funds in the Royal African Company, which transported Africans across the Atlantic.

When anti-slavery abolitionists campaigned to end the trade, they were opposed by the Duke of Clarence, George III’s son, later to become William IV.

The royal and the rest of the pro-slavery lobby would eventually lose the battle when William Wilberforce and other abolitionists succeeded in passing the bill banning the slave trade in 1807.

‘It is this same spirit that spurred on the Windrush generation, who came to the United Kingdom to help rebuild after the Second World War.

‘We are forever grateful for the immense contribution that this generation and their descendants have made to British life, which continues to enrich and improve our society.’

William also said he was ‘deeply moved’ by the plight of Jamaican students caught up in the conflict in Ukraine.

Watching on, Kate was dressed in a green gown by British designer Jenny Packham, pairing it with earrings and a bracelet loaned by the Queen.

He said: ‘We can only forgive people who acknowledge that what they did was wrong and are willing to repair the breach of the wrongs they have committed.

‘And today the British monarchy has a lot of African artefacts in their possession – they still bathe in the wealth that was extracted out of the blood, sweat and tears and lives of our people and we have never been compensated for any form of enslavement.’

They will then fly to the Bahamas where they will be greeted by prime minister Philip Davis.

Yesterday, Kate gave a speech and chose to focus on the ‘crucial role of teachers at the front line in shaping society’ after she and William enjoyed an animated chat with schoolchildren on visit to a college in Kingston

The royal couple went on to visit the Spanish Town Hospital on the next stop of their Jamaica tour.