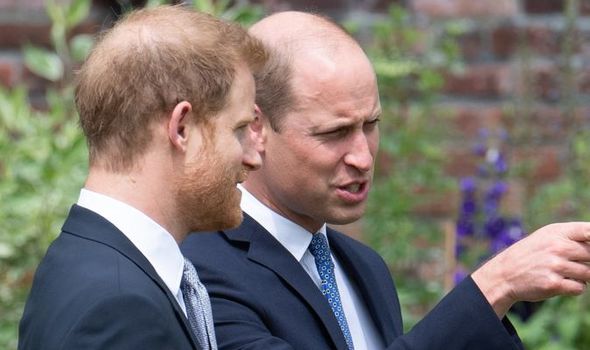 William and Harry have reunited today for the event at Kensington Palace on what would have been their late mother’s 60th birthday.

Much attention has been on the brothers who have been embroiled in an ongoing rift.

Royal expert Emily Andrews said the Duke of Cambridge offered his younger brother, who has been vocal in his criticism of the British press, an olive branch by limiting media at the event.

Ms Andrews tweeted: “One olive branch that William has already extended to Harry is banning all UK media, save PA & 1 TV camera, from today’s unveiling of Diana’s statue at KP, presumably at H’s instigation.

“The whole ceremony now classed as ‘private’ in keeping with H’s battles with the media.”

The Duke of Sussex traveled back to the UK for only the second time since Megxit for the statue unveiling.

He arrived last Friday and has been quarantining at his and Meghan Markle’s former Windsor home Frogmore Cottage.

The Duchess of Sussex has remained in California with their newborn daughter Lili and two-year-old son Archie.

Harry stepped out on Wednesday for the star-studded awards ceremony of the charity WellChild at London’s Kew Gardens.

And he has put his differences with William aside for the event in Kensington Palace’s Sunken Garden this afternoon.

The unveiling has been scaled back with many of Diana’s friends unable to attend due to Covid restrictions.

A royal source said: “Plans have been scaled back due to the current Covid-19 restrictions and media arrangements reflect both the size and tone of the event.”

The brothers, Diana’s close family, the statue committee and others involved in the process of erecting the statue are attending.

Diana’s sister, Lady Sarah McCorquodale, was a member of the six-strong committee tasked with commissioning and privately raising funds for the creation of the statue, alongside Julia Samuel, who was a close friend of the Princess.

It was chaired by Jamie Lowther-Pinkerton, the brothers’ former principal private secretary, and its members advised on the selection of the sculptor and worked with Historic Royal Palaces on the statue’s installation.

Ian Rank-Broadley, who has a long track record of creating images of the Royal Family, was chosen to sculpt it, and he will be among the invited guests, along with garden designer Pip Morrison.

Large crowds of royal fans and wellwishers have also gathered outside the palace.

The garden has been filled with more than 4,000 flowers and offers a “calmer and more reflective setting” for the permanent tribute to Diana.