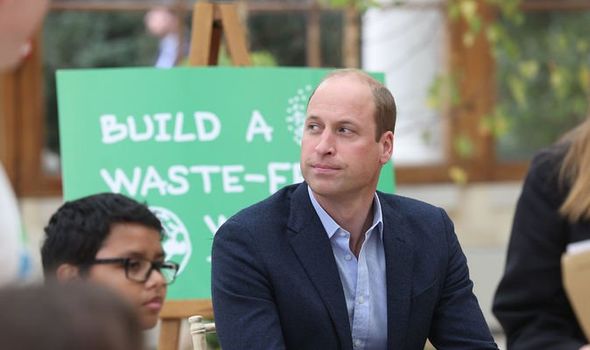 In an interview for BBC Newscast about climate change ahead of his inaugural Earthshot Prize awards, Prince William says: “We need some of the world’s greatest brains and minds fixed on trying to repair this planet, not trying to find the next place to go and live.

“If we’re not careful we’re robbing from our children’s future through what we do now. And I think that’s not fair.”

He also warns the COP26 summit, where world leaders will gather in Glasgow at the end of the month, against “clever speak, clever words but not enough action”.William says in the interview, being aired today, that it would be an “absolute disaster” if his eldest son, Prince George, was having to talk about the same issue in 30 years’ time when it was too late.

The comments come just hours after Star Trek’s William Shatner made history by becoming the oldest person in space. He added that his viewpoint had changed since he had his own children, saying: “I want the things that I’ve enjoyed – the outdoor life, nature, the environment – I want that to be there for my children, and everyone else’s children.”

Yesterday he and the Duchess inspired children to think of ways to save the planet at an activity at Kew Botanical Gardens in London.

The future king and queen used Ant-Man and the Invisible Woman superhero toys at the brainstorming session with a group of 12-year-old pupils from The Heathland School in Hounslow, west London.

They were joined by the Mayor of London, Sadiq Khan, naturalist and TV presenter Steve Backshall and his wife, Olympic rower Helen Glover.

Given a number of items – for William, a pack of playing cards, an apple and a drumstick, and for Kate, a mobile phone, a key and an orange – the pupils were asked how they could use them to solve environmental problems.

William said afterwards: “Some of the things they said are already being worked on by scientists, which shows how bright they are.”

Kate said: “They are buzzing about it, they had such great ideas.”

Yusef Rawn, 12, said William had suggested uniting all the superheroes to gather all the world’s rubbish and eject it into space: “We thought it was quite interesting but it wouldn’t work sadly because we don’t have any superheroes.” Kalina Wojcikiew, 12, added: “I’m just so glad there are people wanting to do something about the environment.”