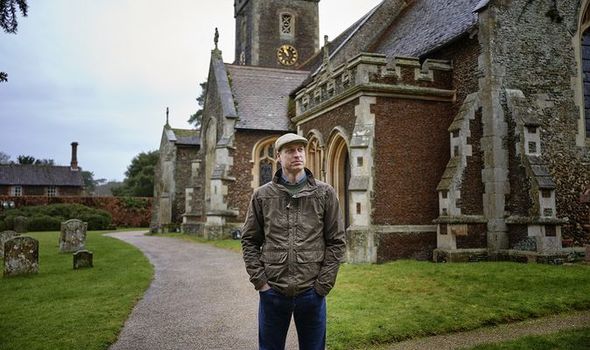 The future king also revealed the tune that gets his children up and dancing at home. His tiny trio absolutely love Shakira’s hit Waka Waka. William shared the personal stories and key music in his life during a fitness podcast. Surprisingly, he also admitted to having a soft spot to Heavy Metal band AC/DC and pop star Taylor Swift. He spoke about them during a walk around the Queen’s Sandringham estate in Norfolk recorded for a festive edition of The Time to Walk audio series featured on the Apple watch Fitness + service from tomorrow.

William, 39, also shared memories of walking with his grandfather Prince Philip, who died in April. And he admitted to getting the giggles as a child during church services and the importance of not taking oneself too seriously.

He revealed: “What I’ve been amazed by is how much my children already have inherited my family’s love of music. Most mornings there’s a massive fight between Charlotte and George as to what song is played in the morning. And I have to, now, basically prioritise that one day someone does this one, and another day it’s someone else’s turn. So George gets his go, then Charlotte gets her go. Such is the clamour for the music.

“One of the songs that the children are loving at the moment is Shakira, Waka Waka. There’s a lot of hip movements going along. There’s a lot of dressing up. Charlotte, particularly, is running around the kitchen in her dresses and ballet stuff and everything. She goes completely crazy with Louis following her around trying to do the same thing. It’s a really happy moment where the children just enjoy dancing, messing around, and singing. I hope you enjoy this one. Have some fun.”

His mother Princess Diana instilled a love of pop music in her children and there is one song in particular that brings memories of Diana flooding back to him. “When I was younger, Harry and I, we were at boarding school. And my mother used to play all sorts of songs to kind of while away the anxiety of going back to school,” he said.

“And one of the songs I massively remember and has stuck with me all this time, and I still, to this day, still quite enjoy secretly, is Tina Turner’s (Simply) The Best because sitting in the backseat, singing away, it felt like a real family moment. And my mother, she’d be driving along, singing at the top of her voice. And we’d even get the policeman in the car, he’d be occasionally singing along, as well.

“You’d be singing and listening to the music right the way out into the gates of school, when they dropped you off. And, and that’s when reality kind of sunk in that you really were going back to school because before that, you’re lost in songs. You’ll want to play it again just to keep that family moment going. And when I listen to it now, it takes me back to those car rides and brings back lots of memories of my mother.”

These days he is also into heavier music, including the Australian heavy metal band AC/DC. “There’s nothing better than, on a Monday morning, when you’re a bit bleary-eyed after the weekend and trying to get yourself back into the grind of the week, listening to AC/DC, Thunderstruck,” he said.

“I have to say the first time I put it on, and I’ve heard it a million times now, I was kind of like, ‘Well, this is quite heavy for a Monday morning’. But now, when I listen to it, it’s the best tonic for a Monday morning. It absolutely wakes you up, puts your week in the best mood possible, and you feel like you can take on anything and anyone. I’d imagine you’re going to walk quite fast listening to it, maybe with a skip in your step, with the head-banging. It’s a difficult song not to dance to or to nod along to.”

The second in line to the throne is part of an institution that tries to carefully control its image but William insisted he had no problem making a fool of himself every now and again. He recalled how in November 2013 he followed the American singer Taylor Swift “like a puppy” up on stage to sing Livin’ On A Prayer with Jon Bon Jovi at a fundraising gala for the homeless charity Centrepoint at Kensington Palace.

“She puts her hand on my arm, looks me in the eye, and says, ‘Come on, William. Let’s go and sing’,” he recalled. “To this day, I still do not know what came over me. Honestly, even now I’m cringing at what happened next, and I don’t understand why I gave in. But, frankly, if Taylor Swift looks you in the eye, touches your arm, and says, ‘Come with me…’ I got up like a puppy and went, ‘Yeah, OK, that seems like a great idea. I’ll follow you’.

“I walked up on stage in a trance, and then sort of halfway through Jon Bon Jovi’s Livin’ On a Prayer song, I wake up. And I’m thinking to myself, ‘Am I standing on the stage singing Livin’ On a Prayer when I don’t even know the words? But the Centrepoint young guys and girls were there all loving it and cheering away. So I thought, ‘Well, if they’re enjoying it, then the night is for them. So sod it. I can’t be the, the doofus who’s going to ruin it for everyone.”

Desperately trying to remember the words, he was sweating profusely beneath his black tie and, although used to making speeches on stage and appearing in public, he had never sung in public before. “At times, when you’re taken out of your comfort zone, you’ve got to roll with it,” William said. “And I think we’ve gotten to the stage in this life where we do micromanage ourselves. We do worry about: how do we look on social media? Who said what about me? What am I wearing? There’s so many pressures, but I think making a fool of yourself is OK.

“It’s OK to not take yourself too seriously and have those moments where you let go and you just go, ‘Do you know what? I’m OK with this’. So, yeah, go on and have a laugh. And don’t go and watch the video of me singing. Or do go and watch it, but just laugh to yourself about how I was feeling.”

In return for appearing on the programme, William secured five-figure donations from Apple for each of three helplines for people in crisis – Shout in the UK, Lifeline in Australia, and Crisis Textline in the United States. Aides said he had been impressed after listening to Time to Walk and wanted to do it near Christmas, often a difficult time for vulnerable people.

His walk, recorded in the spring, took him from Sandringham House, past St Mary Magdalene Church, and eventually to Anmer, where he and Kate have a country retreat on the royal estate. The walk from the big house to church, a route the Royal Family take on Christmas Day, reminds him of childhood days with his grandfather Prince Philip, who died in April.

“I have strong memories of walking down here, and my grandfather, he used to walk so fast that there’d be huge gaps and spaces between all of us walking down, and there’d be us at the back with little legs trying to keep up,” William said. “You know, I think, over time, you start to feel quite attached to those moments and those memories before.”

He spoke of frequently getting the giggles inside the church. “And what’s very good about it is that we sit opposite each other as a family, and growing up, having my cousins sat opposite me has always been quite difficult to keep a straight face at times,” he said. “I have had the giggles many, many times in the service. Luckily, no one’s filming it. So you can get away with it, and on Christmas Day, it’s fun to have a giggle and enjoy yourself.”

During the walk, he discussed traumatic times at work as an air ambulance pilot, cherished memories of visiting a homeless shelter with his mother, and staying and working with the conservationist Ian Craig at the Lewa Downs ranch near Nairobi in Kenya. His passion for wildlife and the countryside shone through. “I feel like I’ve shared a lot of feelings that makes me feel like it’s been an even better walk than normal,” he said. “Feels like I’ve been on a walk with a best mate or my wife. I’ll be heading back inside now, going to see what the children have been up to before I, hopefully, put them to bed exhausted. Thank you for taking the time to walk with me today.”