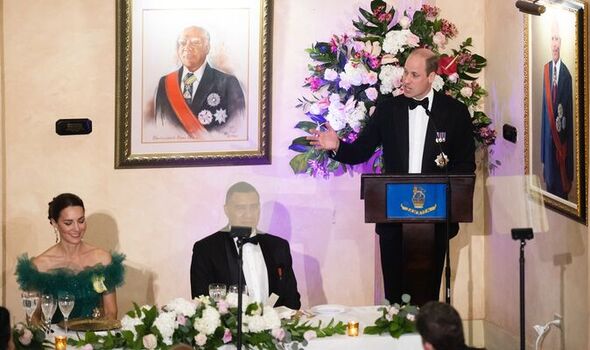 His comments – in a speech at a dinner on the Caribbean Island to mark the Queen’s Platinum Jubilee – came after the Jamaican Prime Minister urged him to address “unresolved” issues. And they echoed those of William’s father Prince Charles, who has previously expressed deep regret for the part Britain played in slavery.

There is growing pressure in Jamaica for reparations and a referendum on ditching the monarchy. Protesters this week demanded an apology at the British High commission.

Shortly after arriving in the country on their Caribbean tour, the Duke and Duchess of Cambridge were mobbed by crowds, chanting: “We love you, we love you.”

But while Prime Minister Andrew Holness welcomed the Royals, he made no bones about wanting to replace them.

He told the Cambridges: “There are issues here which are…unresolved.” Describing Jamaica as a country “proud” of its history and achievements, he added: “We’re moving on and we intend to attain in short order our development goals and fulfil our true ambitions and destiny as an independent, developed, prosperous country.”

William believes it is up to each country to decide if it wants a monarchy.

As Barbados became a republic in November, Charles acknowledged “the appalling atrocity of slavery”, saying “it forever stains our history”.

He also said Britain’s involvement had left an “indelible stain” on the world during a 2018 trip to Ghana – where many people were shipped to a life of slavery across the Atlantic, on boats from the UK.

THE Duchess of Cambridge last night thanked the people of Jamaica, saying she and her husband were “touched by the warmth” the island showed them.

At Shortwood Teachers’ College in Kingston – whose name derives from King’s Town in the reign of William III – Kate beamed as she gave a speech.

She was there to see how teachers are trained to work with parents.

The Duchess, 40, who wore a white McQueen suit and a tangerine Ridley blouse, is on a mission to help give Britain’s under-fives a better chance at a happy life.

And she praised the “passion” involved in the work of Shortwood, which was founded in 1885.

The mother of three said: “By realising the extraordinary impact of early childhood and by learning more about how children grow, think and behave, I truly believe we are on the cusp of one of the biggest opportunities for positive change in generations.”

At an infant school,William, 39, met Natalia Young, who was celebrating her fourth birthday. “My name’s William,” he said, before he asked about her ideal party.