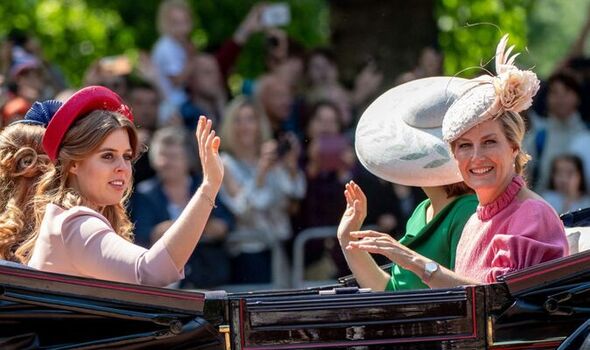 The pair will be attending alongside many other members of the Royal family including Sophie’s husband the Earl of Wessex and the Duke and Duchess of Gloucester.

While the Queen was not included in Buckingham Palace’s announcement of the attendees, Her Majesty reportedly hopes to attend despite her mobility issues.

It is understood she will decide on the day whether she will join other members of the family.

At the event members of the Royal Family will be greeted by the President of the Royal Horticultural Society Keith Weed before touring the gardens.

There will be a special garden for the Queen’s Platinum Jubilee, featuring laser-cut steel silhouettes of Her Majesty.

This will be surrounded by 70 planted, terracotta pots – one for each year of her reign.

However, they are private citizens and each have their own careers – for instance, Beatrice began her working life as a Selfridges personal shopper to gain work experience during her gap year.

A spokesman told the BBC the princess “wanted to get experience of a big retail store and its buying process.”

There had been plans to expand their role in the Royal family after Megxit – but an expert predicted that this had been scaled back, due to the lawsuit involving Prince Andrew.

Richard Fitzwilliams told Express.co.uk: “They only perform a very few royal duties. However, any expansion of their roles, which was a possibility as there are fewer senior royals and many of them are no longer young, is now impossible for the foreseeable future.”

While Beatrice was snubbed for the Buckingham Palace balcony appearance for the Trooping of the Colour, she was radiant just a few days later when she appeared on the red carpet for the charity preview of the equestrian event A Gallop Through History.

Meanwhile Sophie Wessex, the wife of the Queen’s youngest child Prince Edward, the Earl of Wessex, will also be joining the family at the Chelsea Flower Show.

The couple have increasingly entered the spotlight in recent years.

In one example, they were the first royals to speak to the press after Prince Philip’s death

They have also started to represent the Queen at key engagements – including 2021’s Royal Ascot.