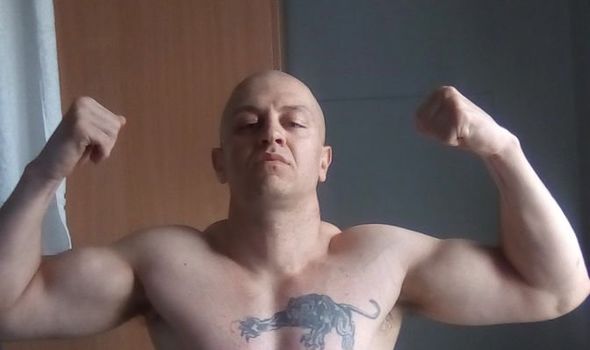 The woman started an “inappropriate” relationship with evil Kade Sibthorpe, 29, after he was released from jail. The thug quickly became violent and abusive towards the 24-year-old victim, even allegedly punching her in the stomach while she was pregnant.

The pregnancy was later terminated, and the former prison officer claimed she had lost her baby as a result of his actions.

But a court heard there was no medical evidence to support this and Sibthorpe was not prosecuted for it.

He was, though, jailed again yesterday for 21 months after admitting controlling and coercive behaviour. Alleged offences of kidnap and procuring a miscarriage were ordered to lie on file, reports Manchester Evening News.

Sentencing the yob, Judge Tina Landale told him: “You are a manipulative person who took advantage of her and her affection for you.”

Minshull Street Crown Court heard Sibthorpe displayed “deplorable” behaviour over a four-month period after he was released from a jail housing sex offenders in Norfolk.

He had been caged there for raping a mum in her own home.

Sibthorpe met the prison officer at the Category C slammer, and she knew what he was in jail for and how long he was serving.

They were once caught in a cleaning store room together, and after concerns were raised, prison bosses had her moved to work on another wing.

When Sibthorpe was released in August this year, the woman quit her job and moved to Manchester, even meeting him at the train station when he returned home.

She claimed she was moving to the city to stay with a friend and for a change of career, working in a care home.

But later they began an “intense” relationship’ and lived together in Oldham, Greater Manchester.

His abusive behaviour started soon into their relationship, as he was “untrusting” and “suspicious” of her.

He resented her meeting up with a friend, and checked the messages on her phone, calling her a “sl*g” or a “dog”.

On one occasion he threw her clothes out of the window, and on another he tipped her out of the bed and called her an “immature little bi**h”.

They split up at one point, and she moved back with her parents. But she returned after feeling that she was “going backwards”.

In anger, Sibthorpe punched a hole in her car windscreen.

On another occasion, she had dressed smartly for a job interview, but was left unable to attend it after Sibthorpe threw coffee over her and ruined her clothes.

Sibthorpe then started complaining that she was “failing to support him financially as she should”, and threatened to “resort to a life of crime”, Mr Blackshaw said.

After returning home from a day of go-karting, Sibthorpe held her down by her throat.

She later became pregnant and told Sibthorpe, and said she didn’t want to have his child.

During an argument Sibthorpe punched her to the abdomen and threatened her with a large kitchen knife, the court heard.

“He then forced her to take them for a drive up to the moors’,” Mr Blackshaw said.

The next morning the pair were seen at a Tesco Express in Oldham. Prosecutors said there was a “violent confrontation” in their car.

The woman, who was wearing a dressing gown and slippers, looked “scared” and was “physically shaking”.

A Tesco worker confronted Sibthorpe, who denied hitting her and said: “No, no we are okay, she’s been like this all morning, she just needs to go back to the flat and sort herself out.”

After again being accused of hitting her, Sibthorpe said: “No, you are very much mistaken, I was leaning over to open the door for her.”

She was taken into the shop, and the police were called. Sibthorpe drove off.

The woman went to hospital and on December 22 her pregnancy was terminated after she had surgery.

Mr Blackshaw said: “She says that was necessary because of the violence from the defendant, there is no medical evidence to that effect.”

Even after he was sent back to jail after being arrested, she continued to contact him.

She went by an alias to get in touch with him, so the authorities would not realise.

They exchanged letters and phone calls, she visited him in jail, and even sent him nude pictures of herself.

She said she’d visited Sibthorpe in jail because she wanted “closure”.

The judge said it was not appropriate for the woman’s victim impact statement to be read in court in full, as it was a “personal letter” to Sibthorpe.

Summarising the statement, Mr Blackshaw said: “She says she effectively lost herself.”

He said she is “very damaged and hurt” and has felt suicidal.

Sibthorpe, of no fixed address, pleaded guilty to controlling and coercive behaviour.

He said Sibthorpe had suffered “very serious abuse” as a child, and is now seeking help and is taking anger management courses at Forest Bank prison.